Happy Monday!  This post is coming to you way late today due to not getting home until after 10 PM last night.  This weekend Kevin and I went to NYC for a little trip leading into my birthday week.  We made this same trip last year and always love getting to visit New York.  Since we had both been several times prior to this trip we didn’t have a real plan of anything we needed to see so just spent all day Saturday walking around which was great AND we ended up getting in 30,000 steps!  Here is a little look into our weekend.

FRIDAY | We decided not to leave until Saturday morning so were home on Friday.  We had dinner at a neighborhood bar called The Kinderhook Tap.  I ordered a Burrata and Olive Tapenade Sandwich which was delicious! 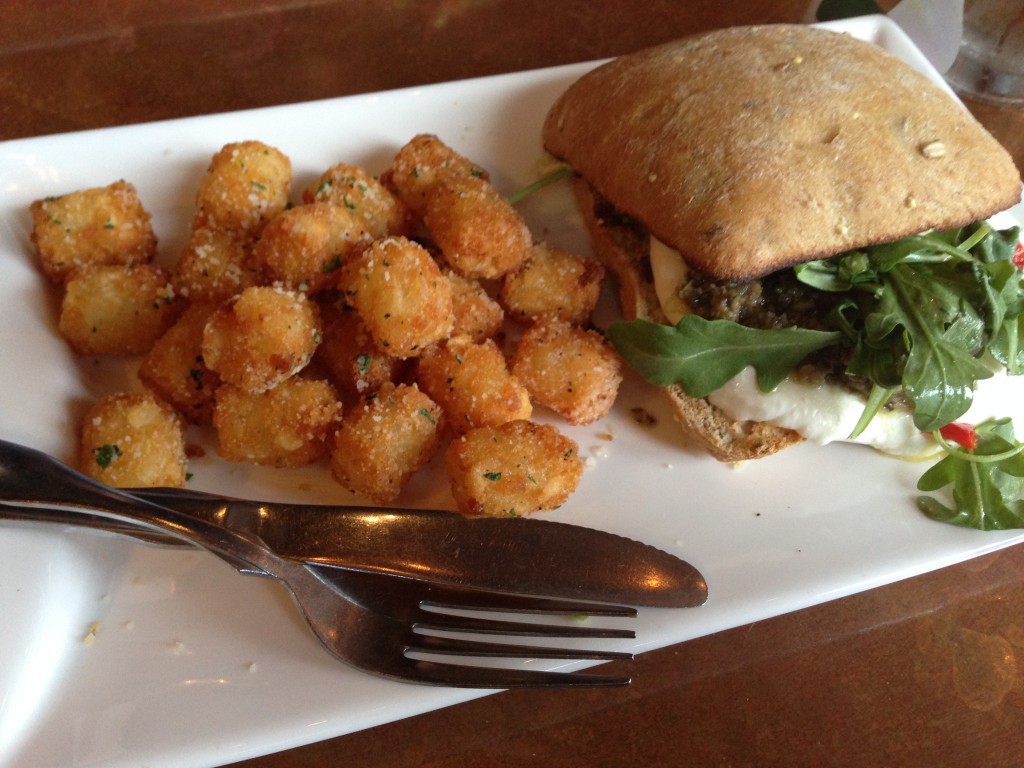 Afterwards we stopped at Brown Cow for some ice cream which we brought home and ate while we watched a couple episodes of OITNB. 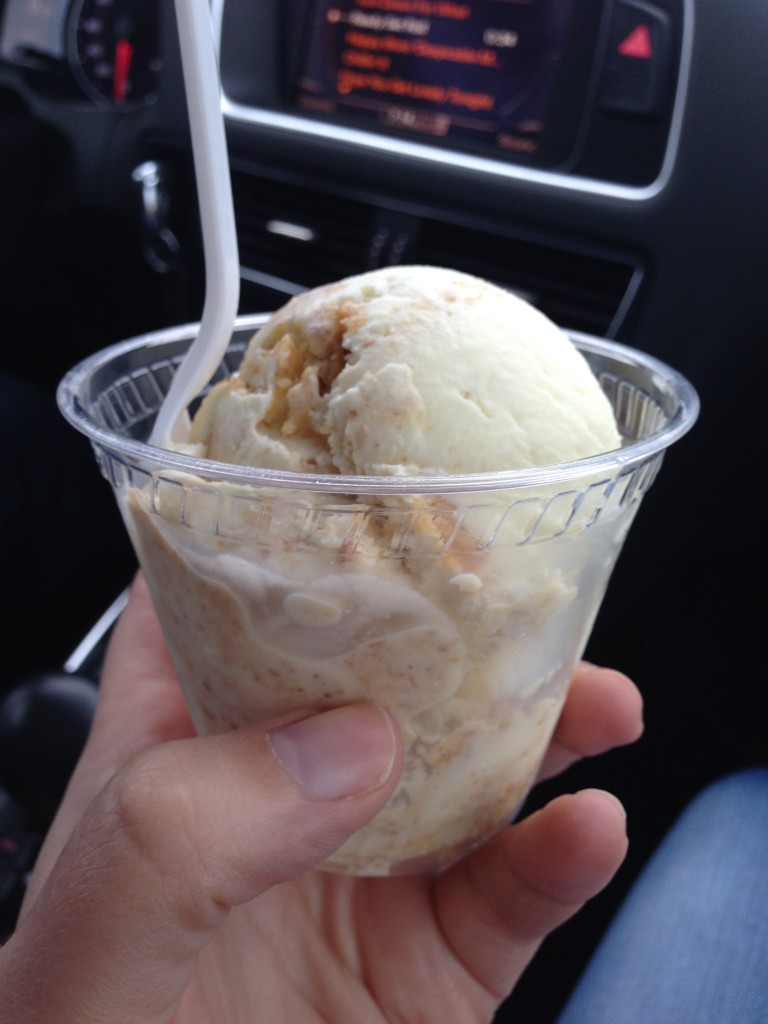 SATURDAY | We had a 6 AM flight which meant a 3:30 wake up call – not fun!  Luckily I was able to sleep on the entire flight.  Once we landed at Newark we headed to the United Club for a quick (and free) breakfast. 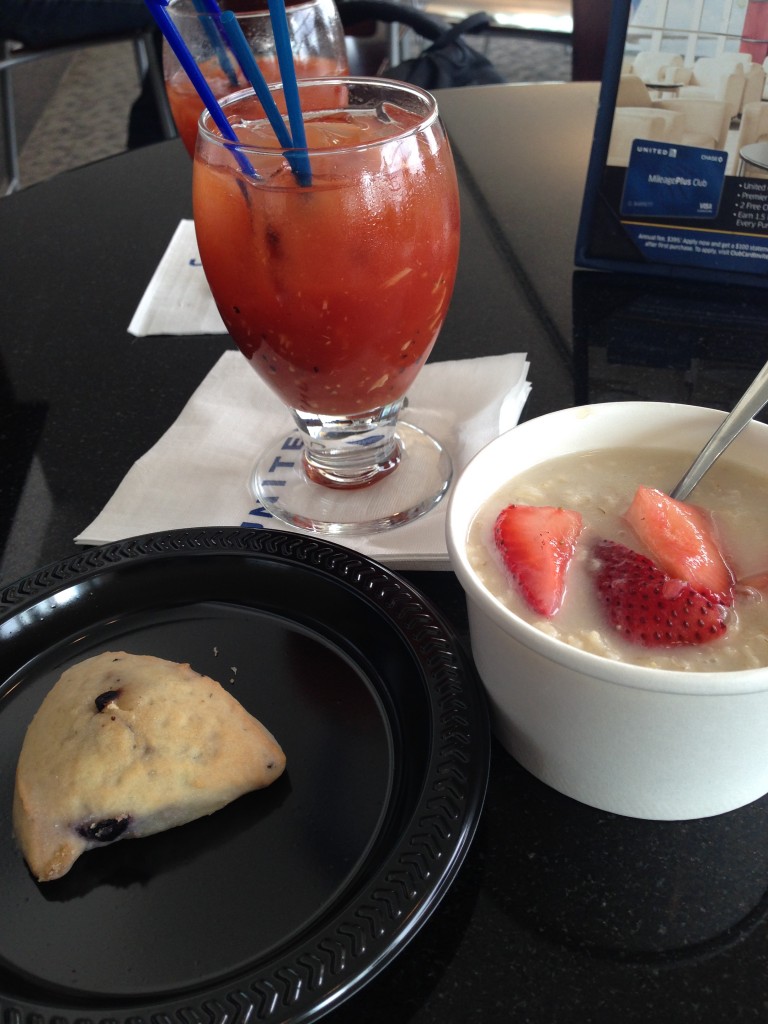 We got to our hotel around 11 AM and were able to check in early so we dropped off our bags before heading out for the day.  Every time we visit New York, our first stop is always the same – Shake Shack in Madison Square Park.  There was actually a BBQ festival going on in and around the park which smelled amazing!  If we hadn’t had our minds set on burgers we probably would’ve checked out the festival. 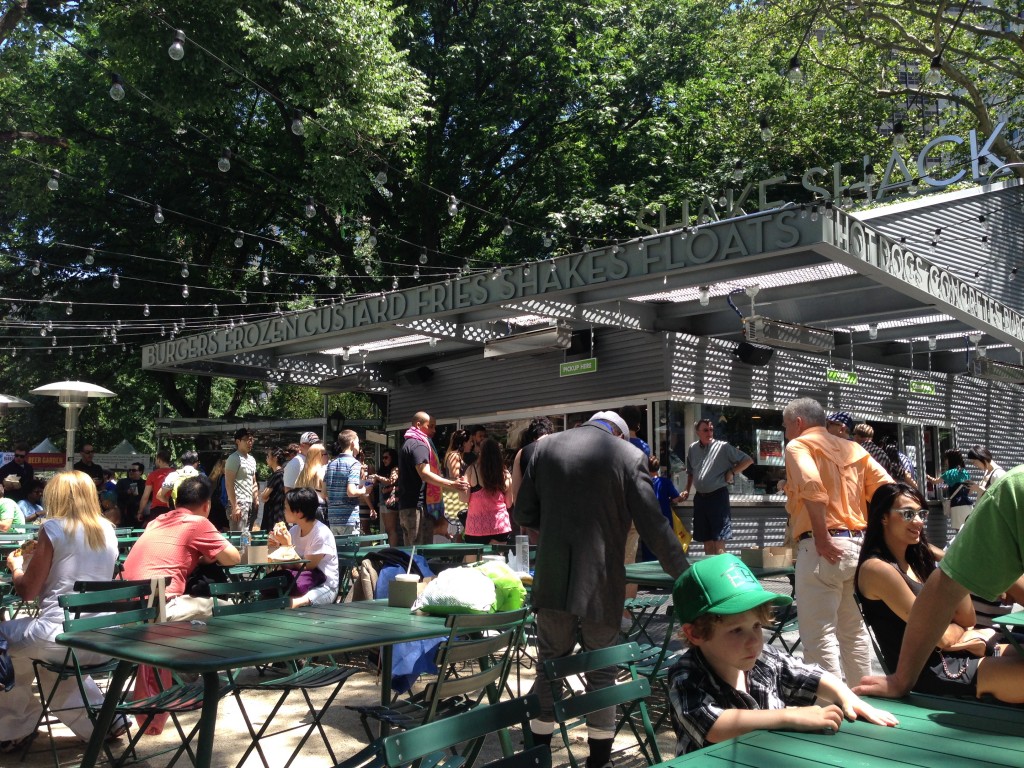 Kevin even broke his 10 month stretch of eating gluten free to eat a Shackburger. 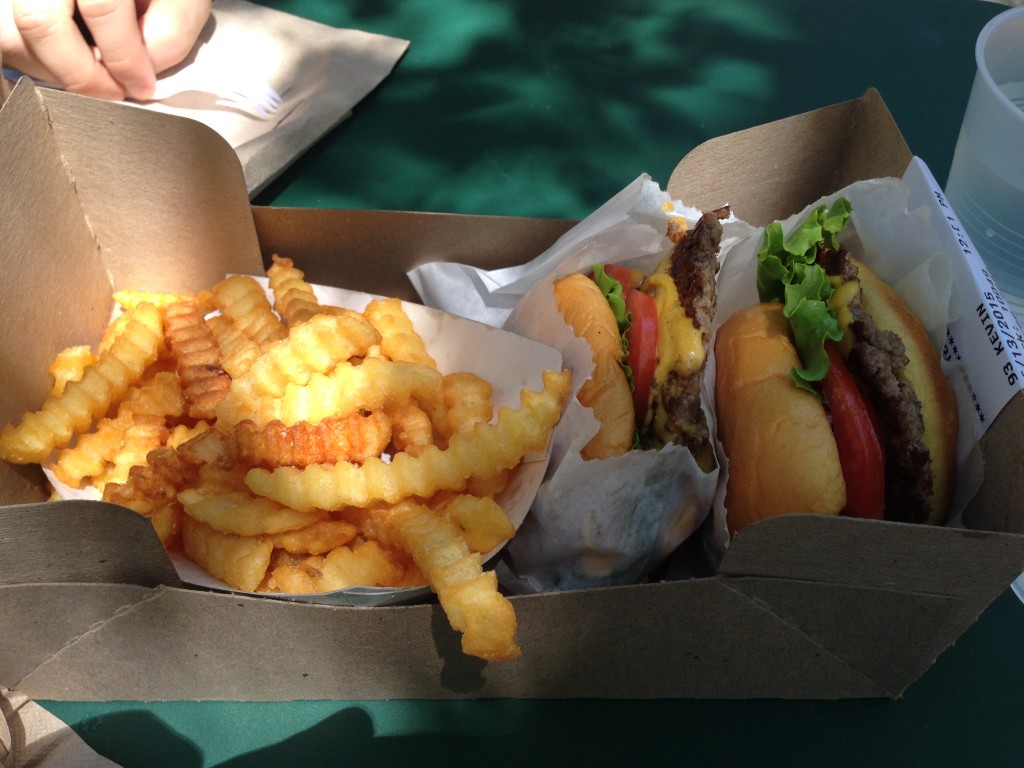 After lunch we decided to head uptown and walk around Central Park.  We have walked around the south side of the park before so decided to start more in the middle and walk north.

We walked all around a Reservoir in the middle of the park which had great views of the skyline.

We walked across the park to the Upper West Side which was a very quiet, residential area.  We then walked a little further uptown so Kevin could see the restaurant from Seinfeld.

From there we hopped on the Subway and went to my favorite area of the city – Greenwich Village.  We made a quick stop for another TV site – Monica’s apartment from Friends!

We spent some time walking around Greenwich and looking at all of the cute shops and restaurants.  We walked through my favorite park, Washington Square Park, which unfortunately was overtaken by a festival going on so it was really crowded. We stopped in Joe’s Pizza to grab a slice to share.  We are definitely Chicago loyal, but one thing New York does better is their pizza. 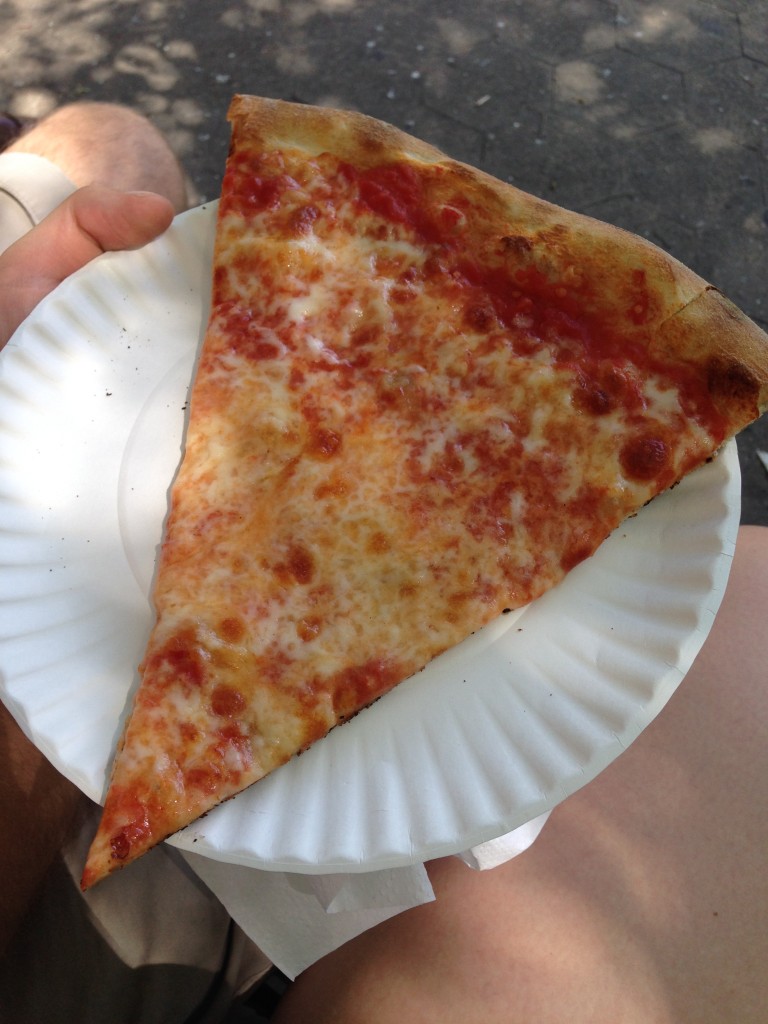 We sat in a cute little park while we enjoyed our pizza break. 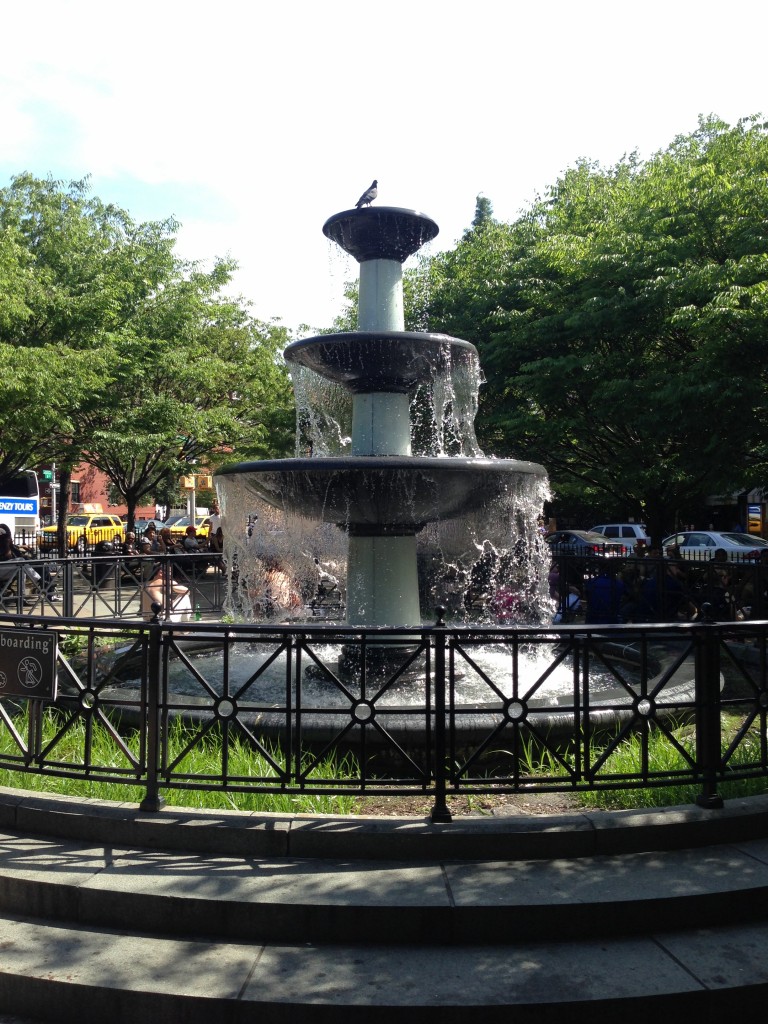 Right next door to Joe’s is Popbar which I had seen on Unique Sweets on the Cooking Channel.  The bar we shared was coconut gelato dipped in dark chocolate and shredded coconut.  If you are ever in NYC you MUST go to Popbar!  We both agreed that is one of the best ice cream treats we have ever eaten.  We seriously contemplated going back for another one.

We continued to walk around the Soho and West Village area before heading back to our hotel for a quick rest and to get ready for dinner.

For dinner we went to The Stanton Social which is one of the places we went to for my bachelorette party in 2010.  The Executive Chef/Owner of Stanton Social is Chris Santos who is one of the judges on Chopped.  I remember loving the food here so definitely wanted to go back.  It is tapas style so we split five different dishes including these French Onion Soup Dumplings which were amazing!  This is another place I high recommend if you are in New York. 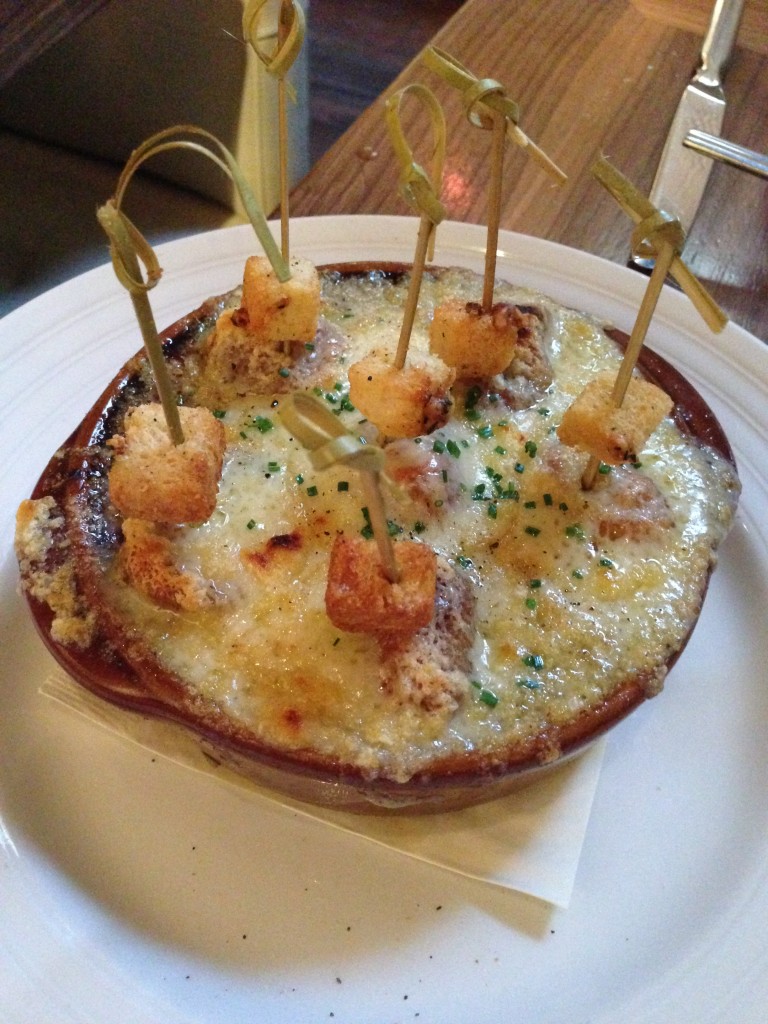 After dinner Kevin took me to the Spyglass Rooftop Bar which our friend Pat took him to when he visited a couple months ago.  It had great views of the Empire State Building and we got to watch the Hawks game while enjoying some delicious drinks.  The perfect way to end the day! 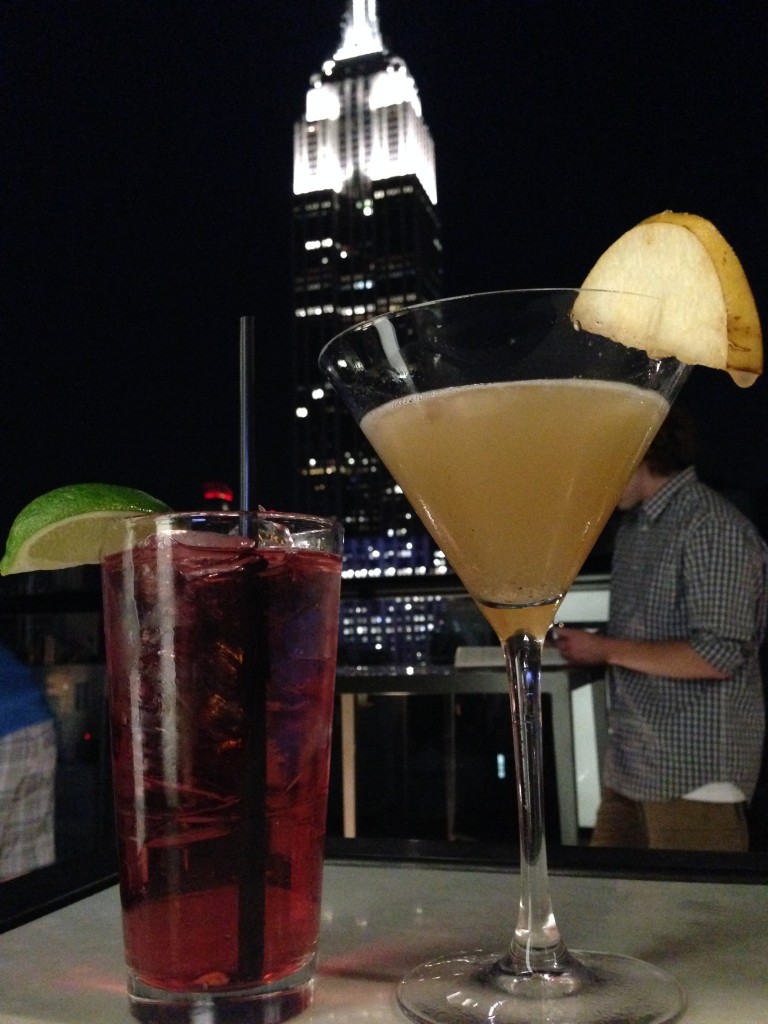 SUNDAY | We started our morning with brunch at Sarabeth’s.  You may remember we went to Sarabeth’s in Key West and loved it so wanted to check out one of their NYC locations too.  I ordered the Scrambled Egg Stuffed Popover which was delicious!

Sadly after brunch it was time to head back to the airport so we walked over to Penn Station to take the train back to Newark. 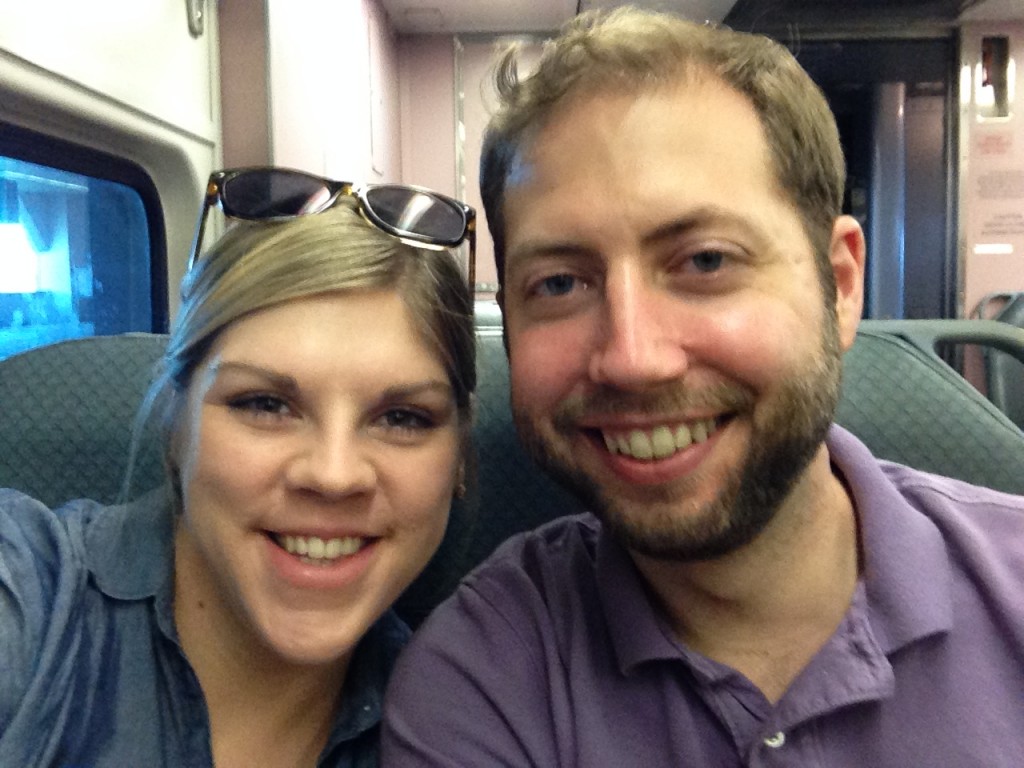 We ended up having to connect through Indianapolis and due to some delays didn’t get home until late.  Even though the trip was short, it still felt like a long weekend and we had a great time as usual!  I already can’t wait until our next visit. 🙂