Happy Monday!  Even though I’m not excited to be back at work today, I am excited to share my weekend with you!  Kevin and I drove down to West Lafayette for Purdue’s Homecoming and we had such a fun time!  This was our second trip back to Purdue this football season and both weekends have been some of my favorites this year! 🙂

FRIDAY | Our first stop in town was dinner at Cafe Literato.  I had a grilled chicken salad and tomato soup which both hit the spot. 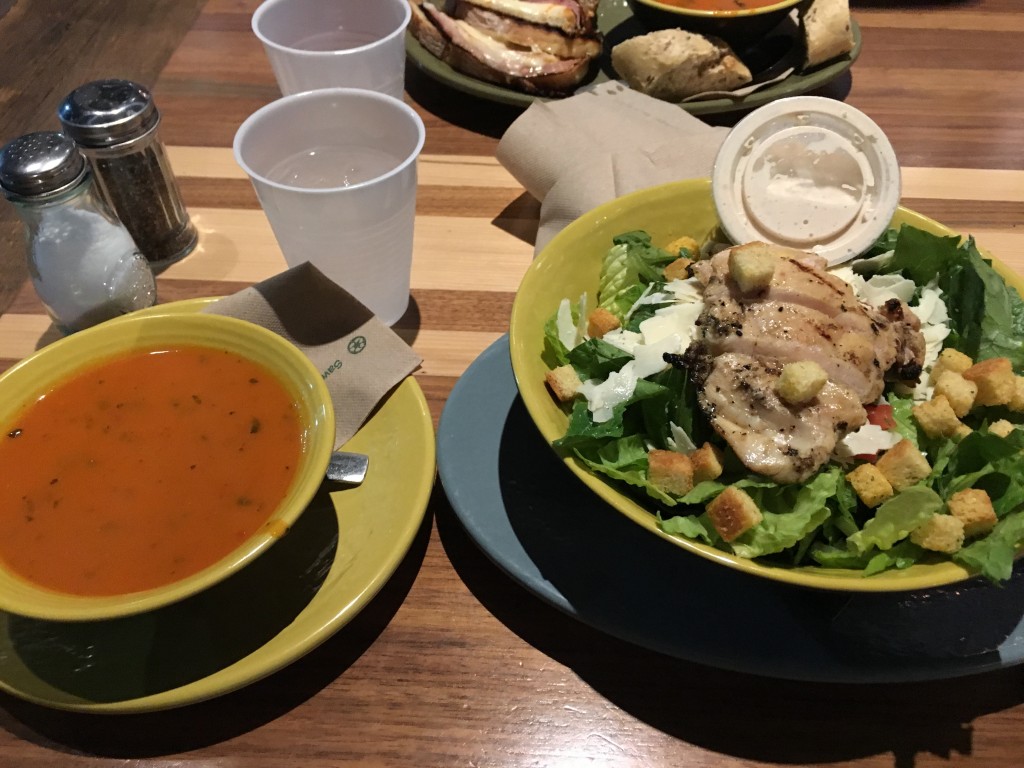 We then drove over to campus for the Homecoming parade.  This was our first time attending the parade and it was really fun!  The marching band played and there were several floats designed by different student organizations for this year’s theme “Bundle Up Boilers!”.  The dorm I lived in my Freshman year won first prize. 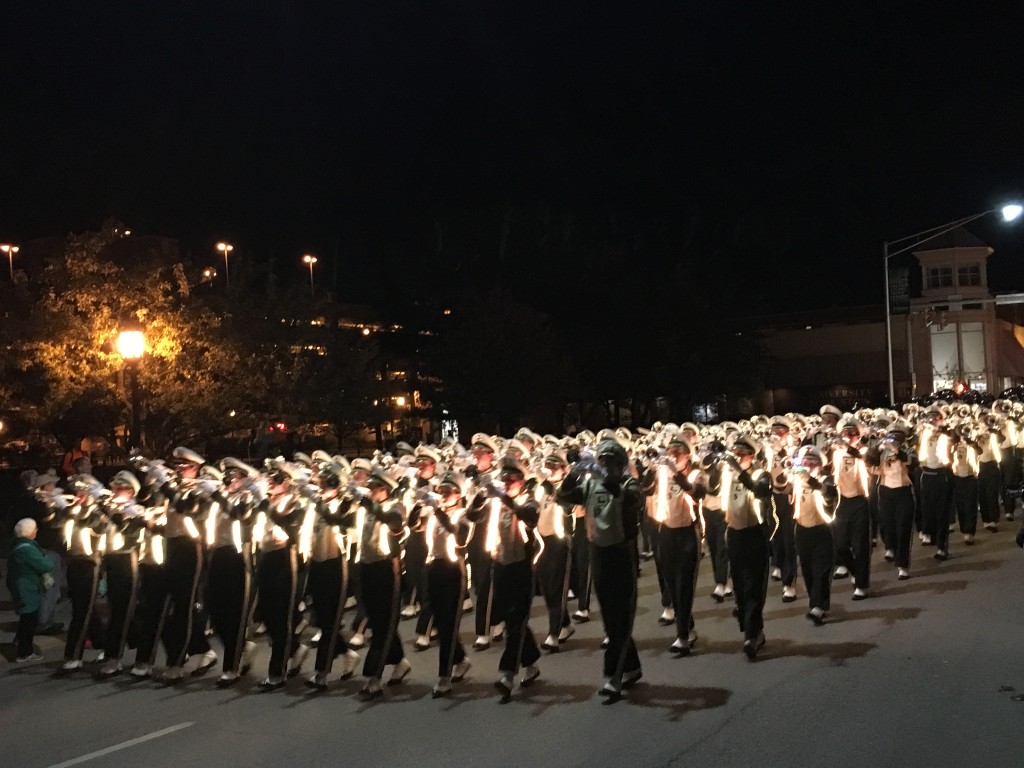 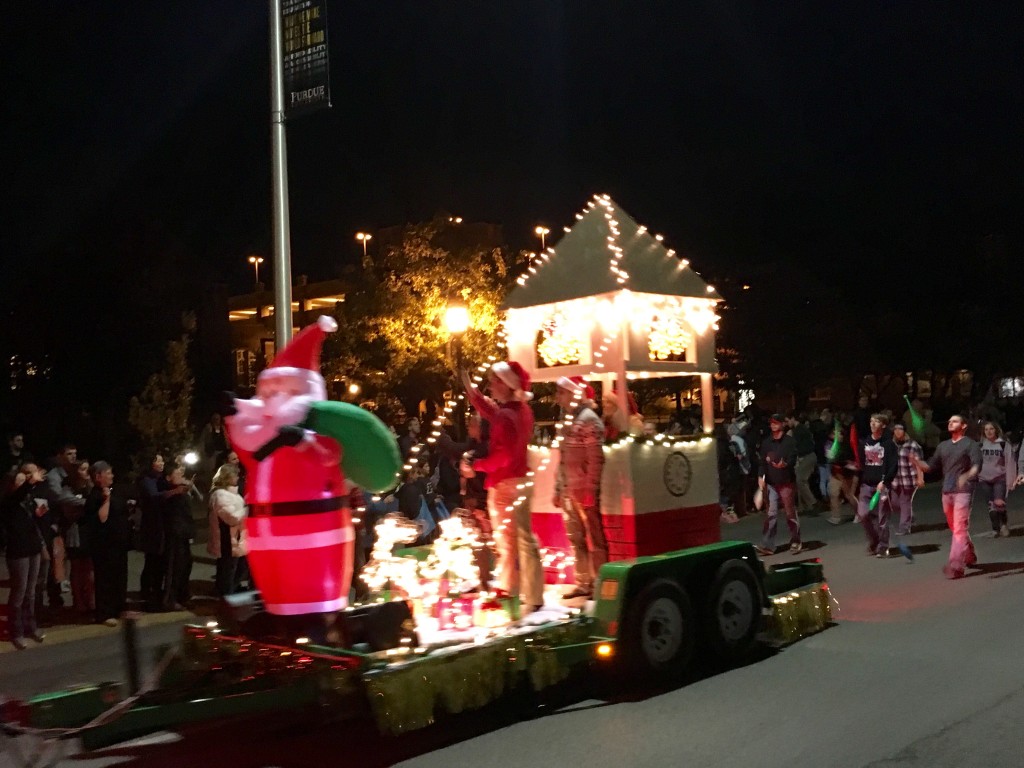 After the parade Kevin and I walked around campus and checked out some new additions to the buildings we had most of our classes in. 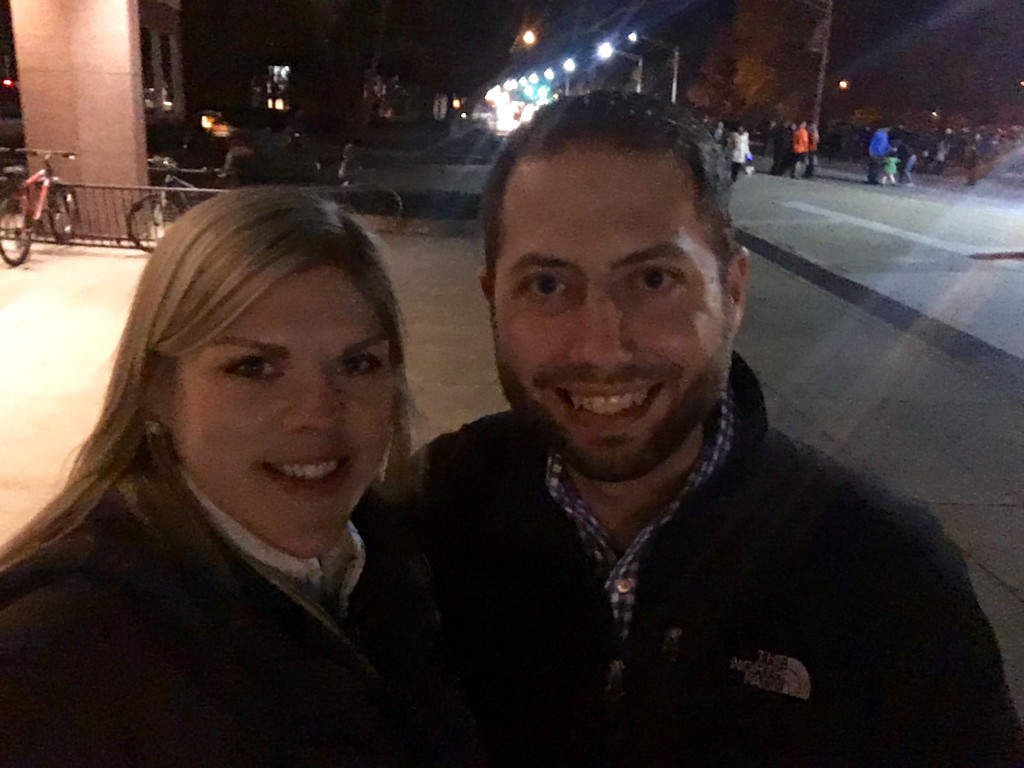 SATURDAY | We were up bright and early to check out some of the Homecoming activities before the game which was at noon.  There was a row of tents set up for all of the different colleges and campus organizations and everyone was giving away free stuff. 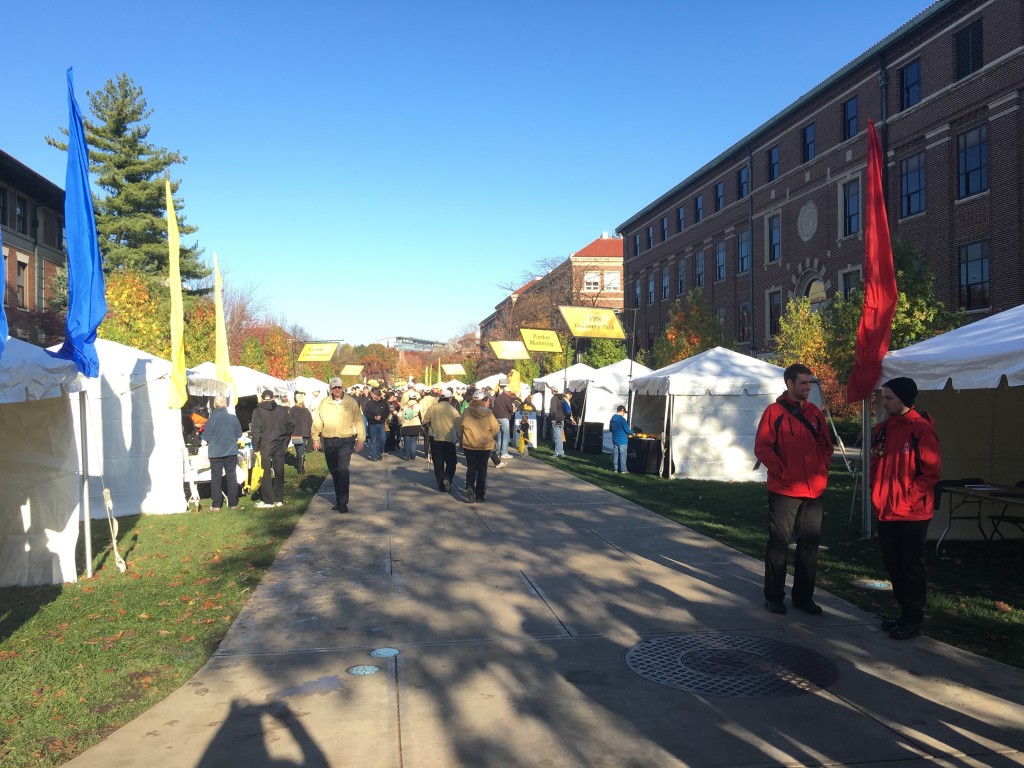 There were even several photo ops along the way.  The University really did a great job setting up all of the activities. 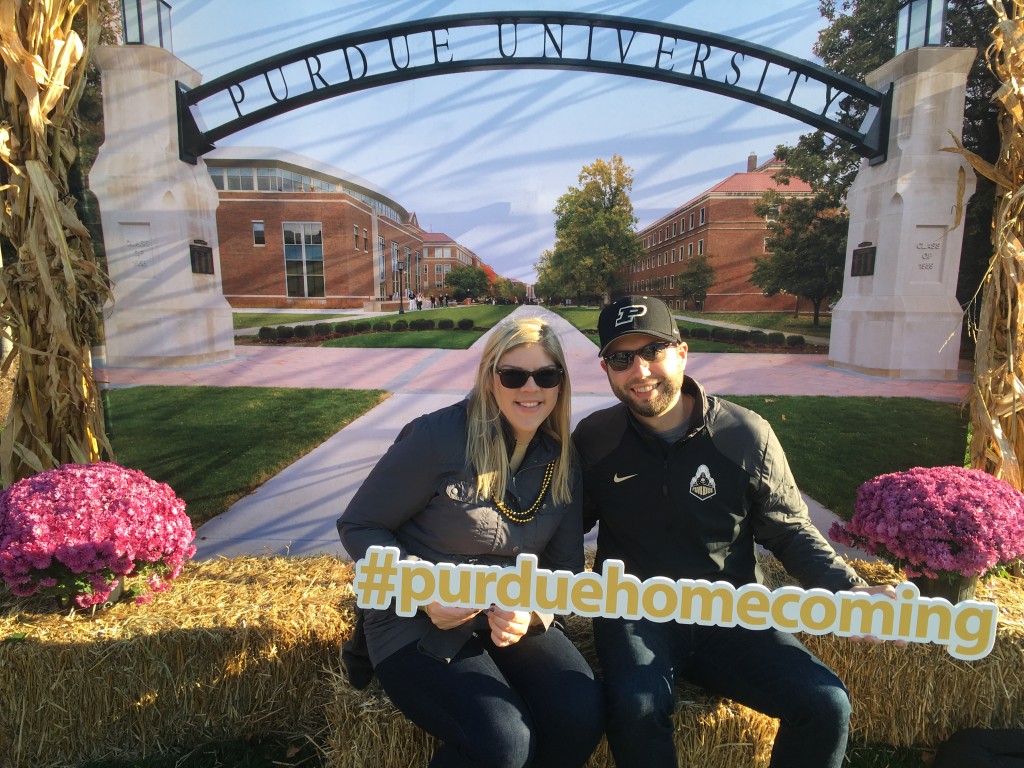 Next we headed over to Mackey Arena (the basketball stadium) for the pep rally before the football game.  The pep rally is called the 211 Session and it takes place 2 hours and 11 minutes before game time.  This is a new tradition that just started in 2013.  A few years ago they nicknamed the football stadium “The Furnace” so the 211 name refers to one degree below water’s boiling point. 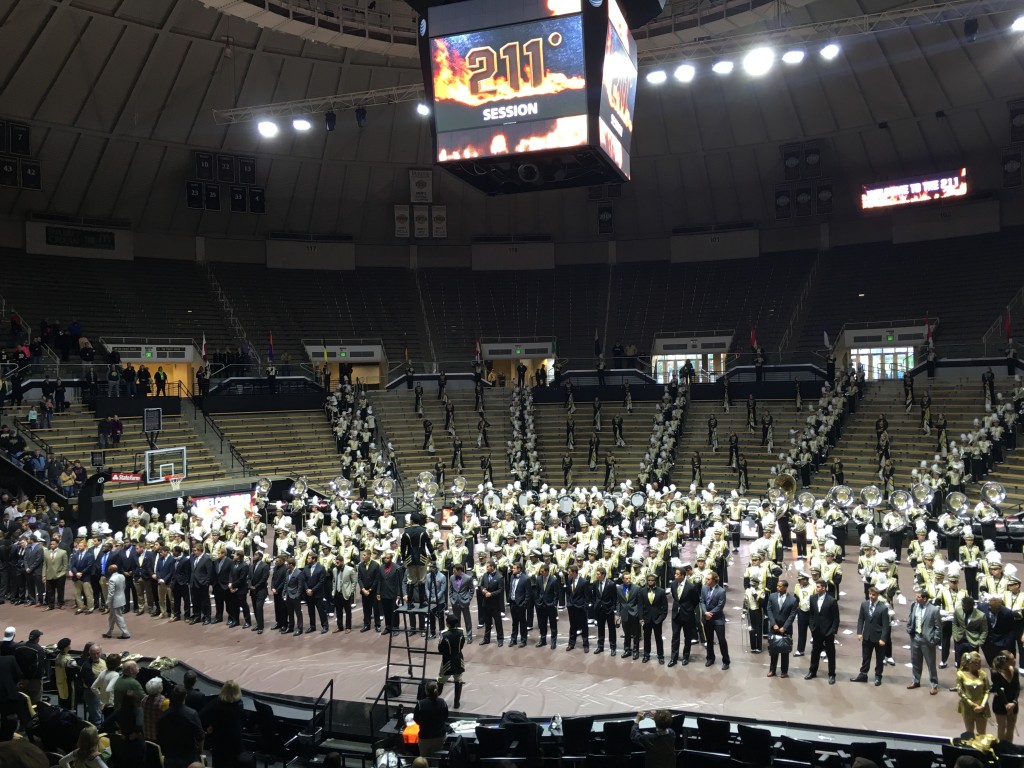 The marching band played “Hail Purdue” as the football team paraded in.  Coach Hazell gave a little speech and then the band and cheerleaders performed.  I thought it was really cool! 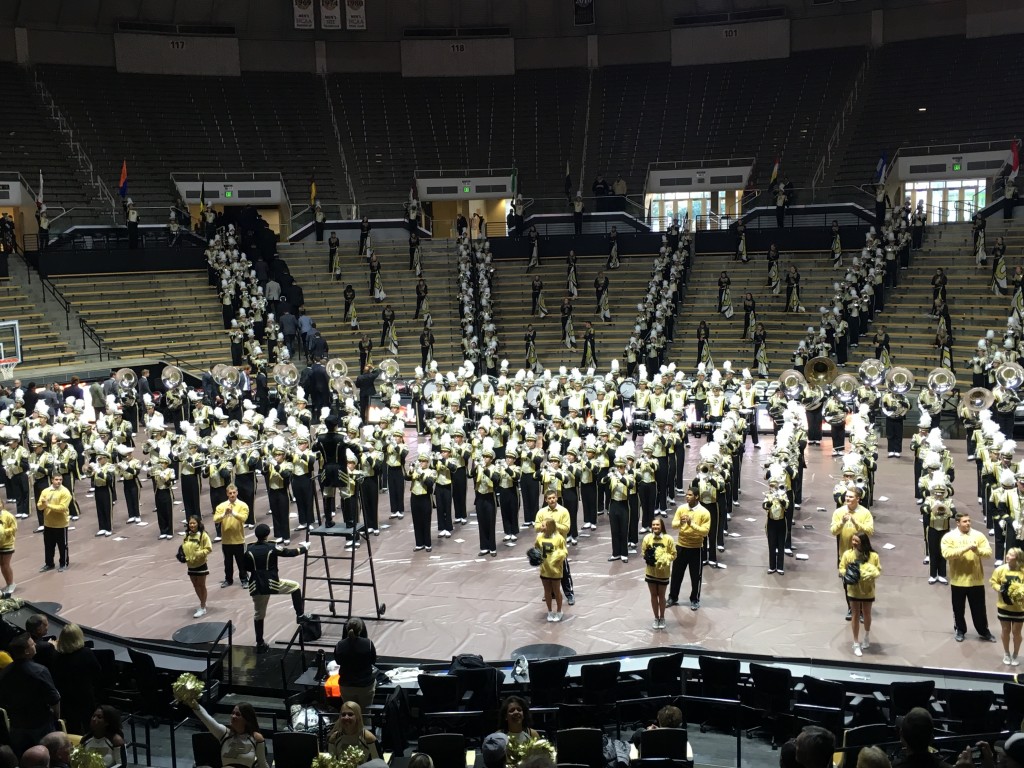 I even got my picture taken with Purdue Pete! 🙂 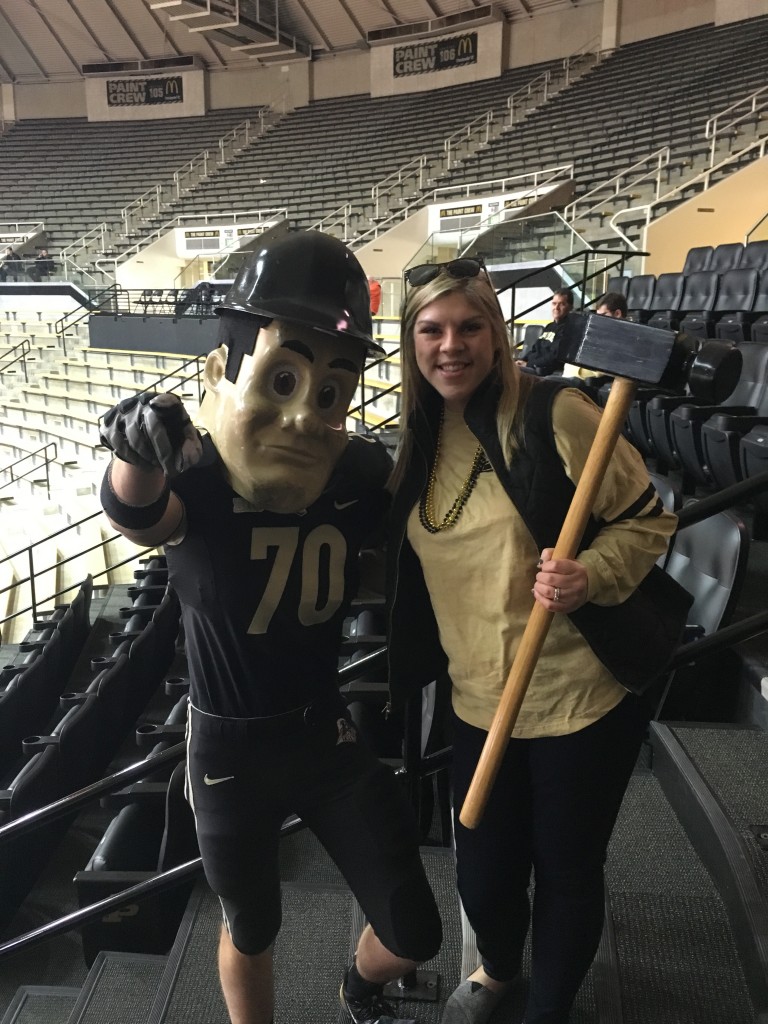 After the pep rally we went over to meet up with some of our friends to tailgate.  This year there were only six of us which is much smaller than our crew in years past.  It was still good to see everyone though!

Before the game started we went to the South End Zone which is another newly created addition to Purdue football.  They took out some of the seats in the end zone and created a bar/pavilion area that you need a special pass to get into.  My sister got Kevin and I passes so we got to go which was fun. 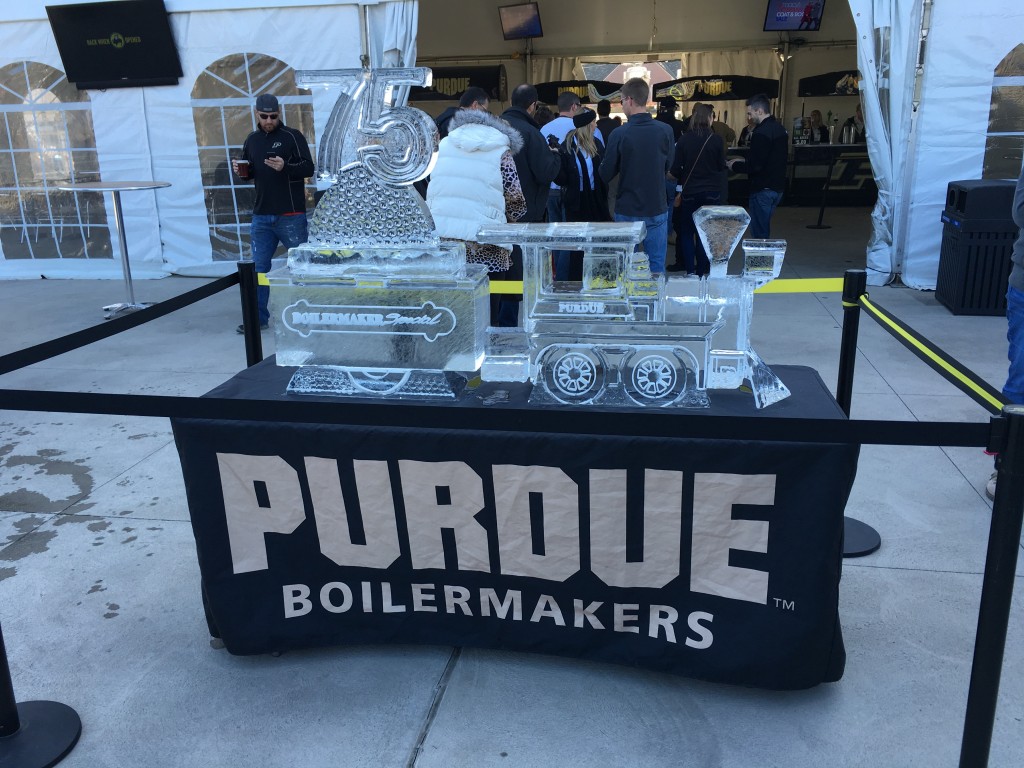 The end zone also was a great spot to watch the team run onto the field for game time! 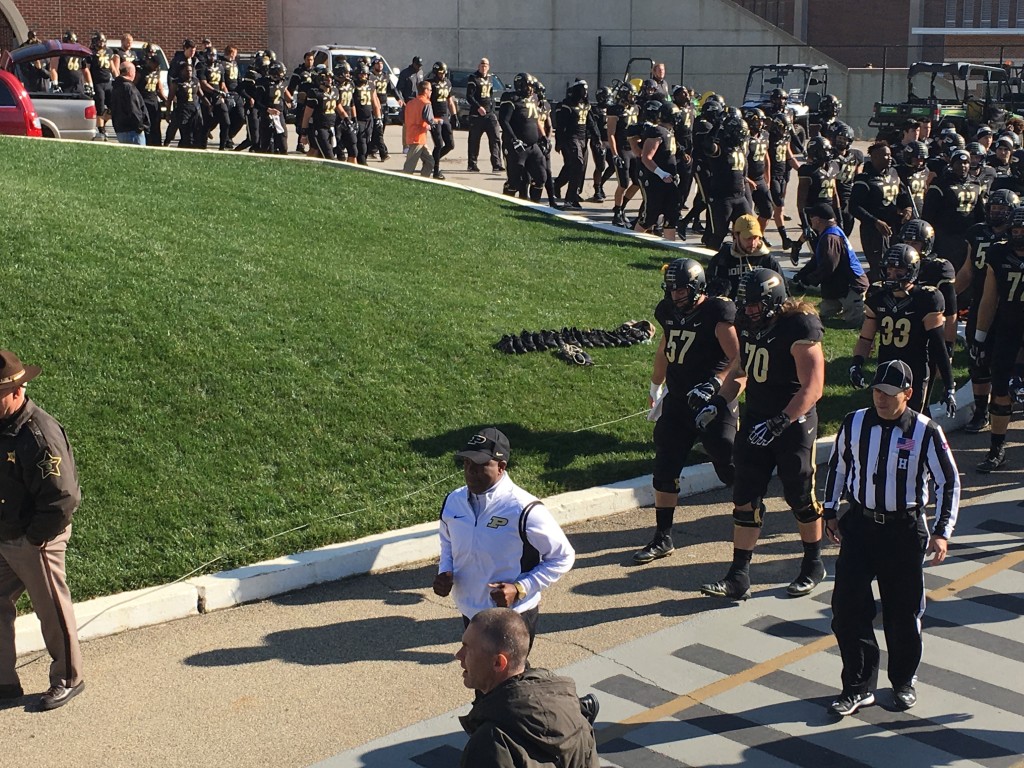 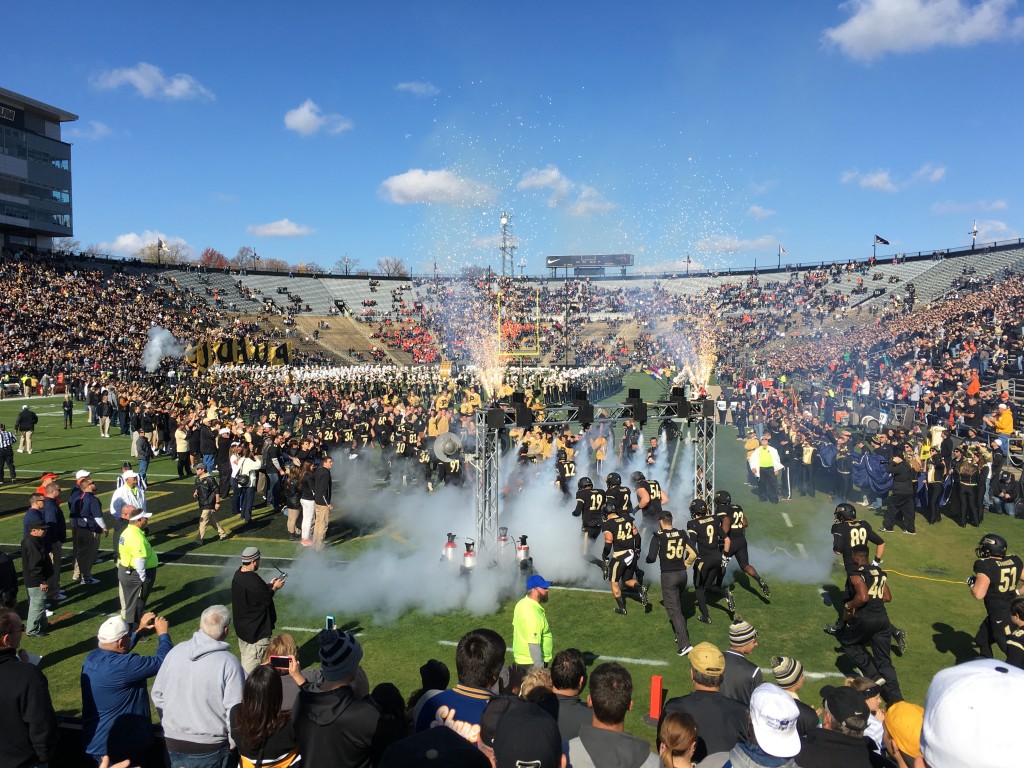 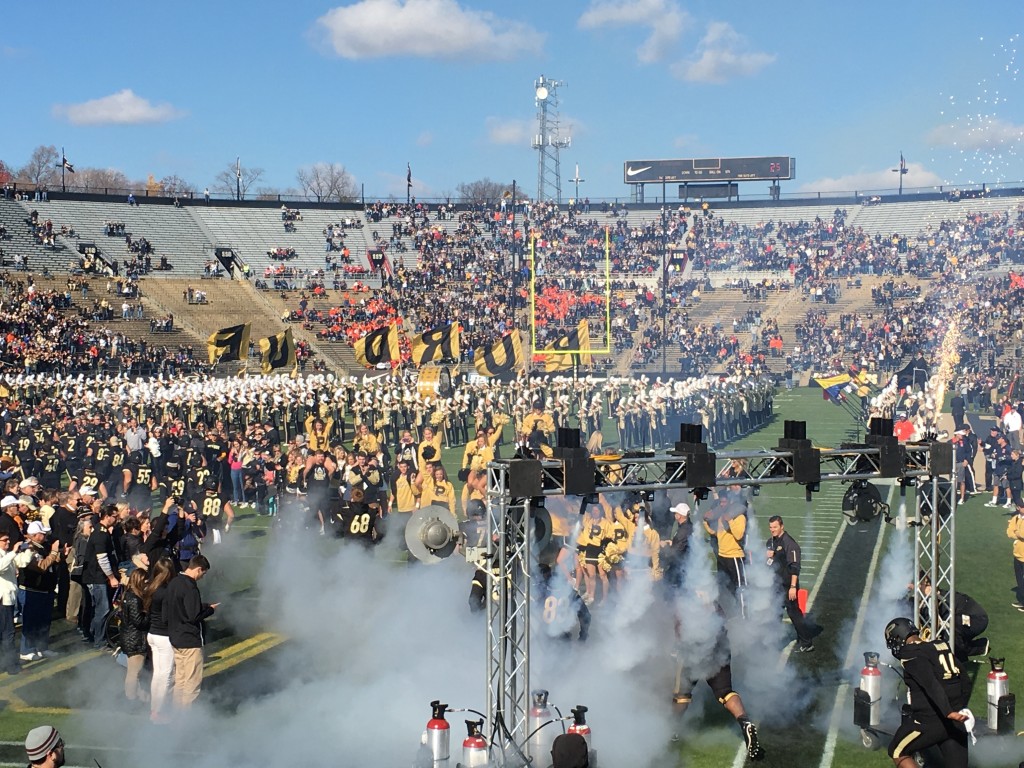 And yes our stadium is that empty (it did fill up more once the game started).  Unfortunately, the football team is not very good this year and this game was no exception.  It was actually pretty ugly.  Our seats were right in between those two seas of orange so most of the game we had to listen to “I-L-L” “I-N-I” from the Illinois fans.  At least the band always puts on a good half time show!  This game they were honoring Roy Johnson who has been the voice of the Purdue band for 60 years!  He is retiring this year so the whole show was a tribute to him.  I definitely teared up a little. 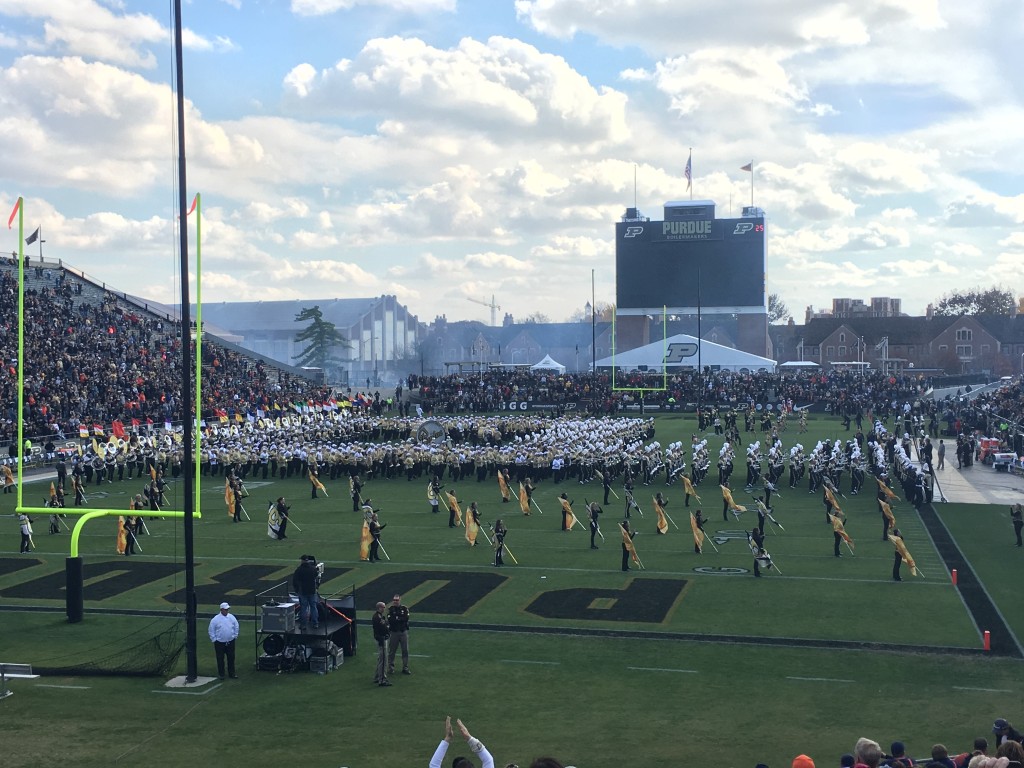 After half time we went back to the South End Zone and watched the second half from there. 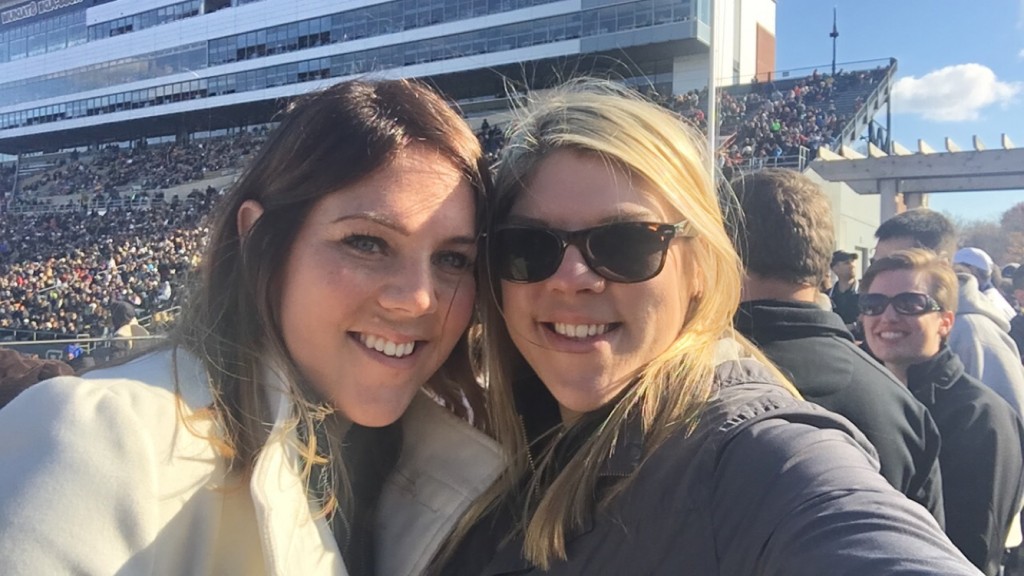 We did a little more tailgating after the game and then Kevin, Sean, and I went on a “behind the scenes” tour of Mackey Arena thanks to Mandy’s cousin Jason.  You guys, Kevin was in Purdue basketball heaven!  He was like a kid in a candy shop and could not stop smiling.  Basically all of my pictures are of him.  Here he is in the locker room: 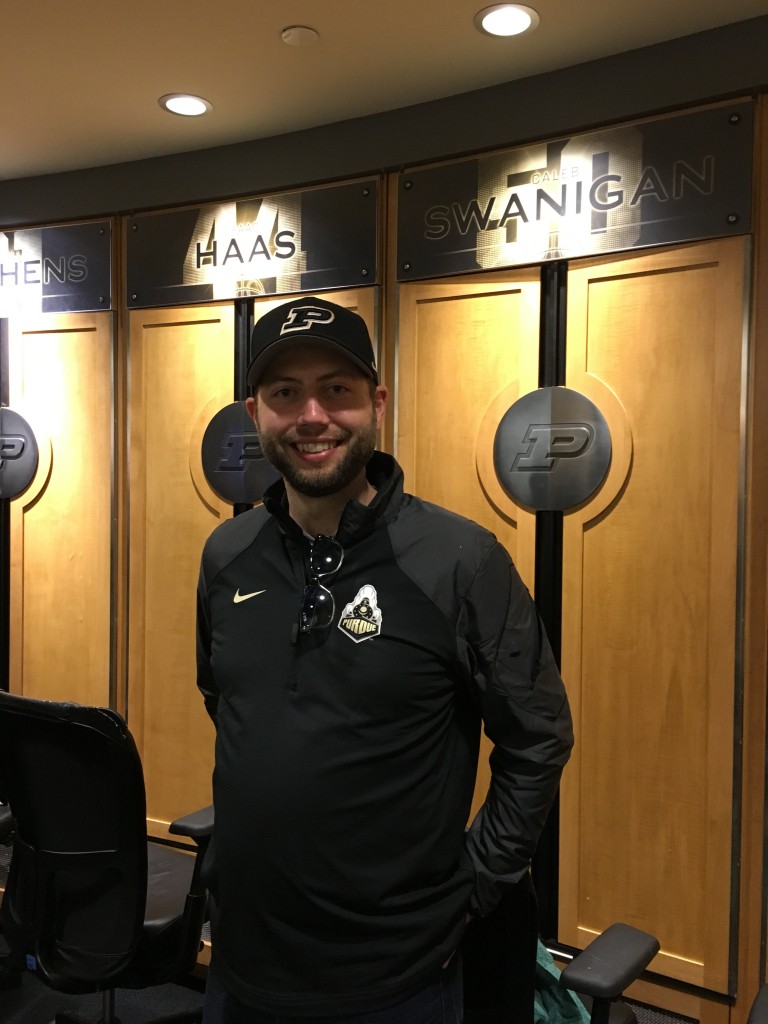 And in their film room: 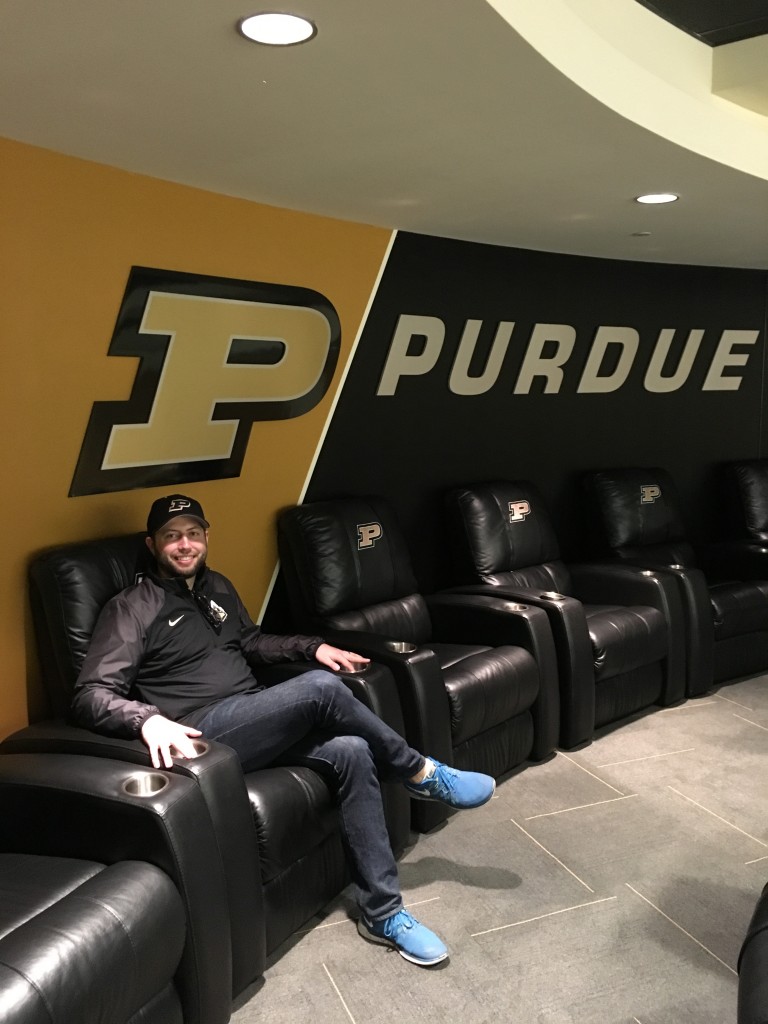 And on their practice court named after Brian Cardinal: 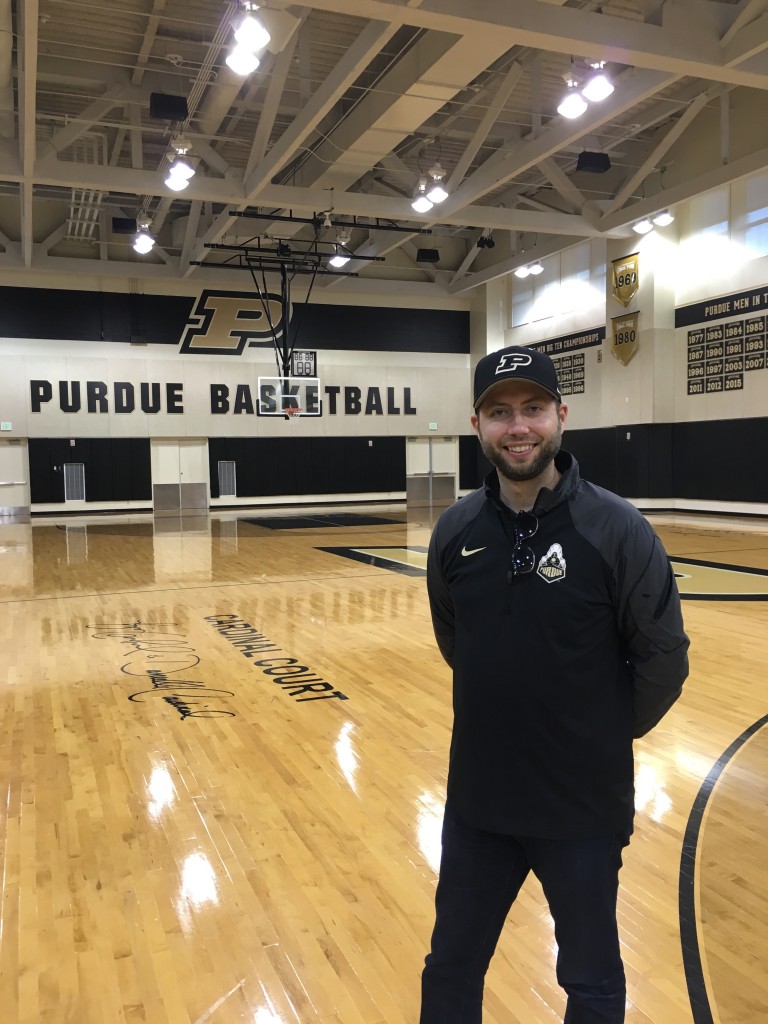 After a full day of all things Purdue, I spent the rest of the evening hanging out at my sister’s house watching even more football.  At least Alabama got a win for my brother and sister-in-law!

SUNDAY | We made a couple of stops at the campus bookstores before heading over to my parents’ house.  We visited with them for a few hours and then headed back to Chicago.  Once we got home I ran a couple of errands while Kevin worked on a paper for school.  We fell asleep pretty early around 9:30 last night.

On our drive home I asked Kevin what his favorite weekends have been so far this year and we both agreed that the two weekends back at Purdue are some of them!  We just love being back on campus.  It holds such a special place in my heart and I am so thankful we only live two hours away.