Ever since I learned about the concept of Nico Osteria last winter, I knew this place had to be added to my restaurant list. 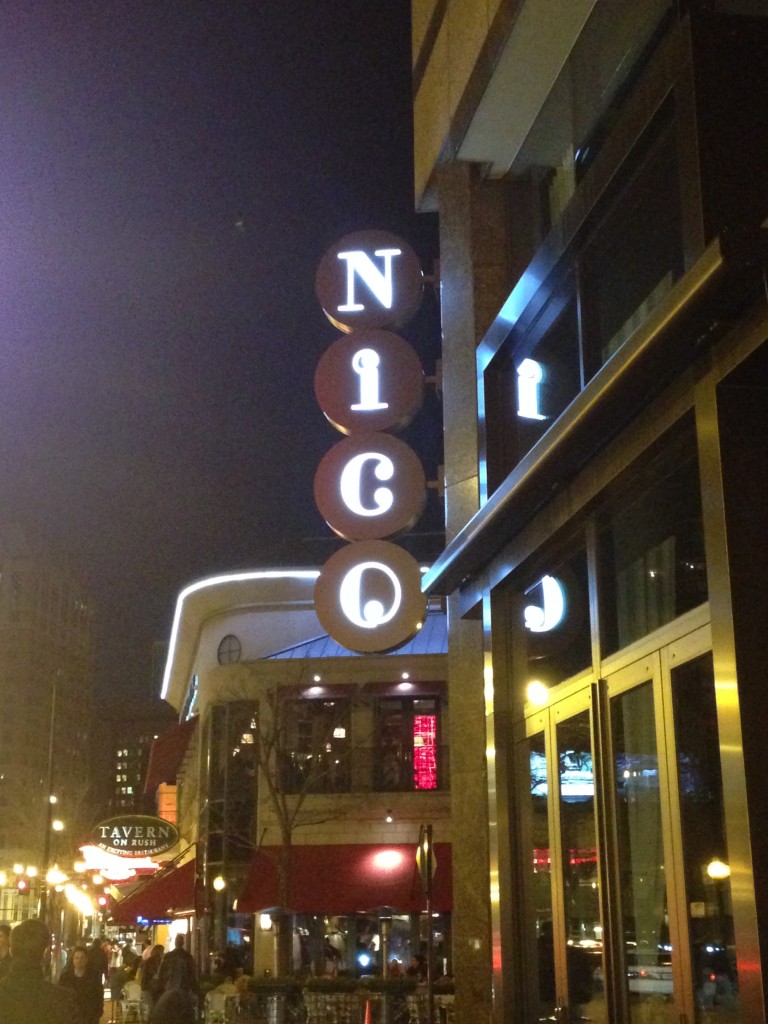 Known for their seafood and Italian cuisine, Nico Osteria is part of One Off Hospitality Group which includes other famous Chicago restaurants such as Avec, Blackbird, The Publican, and Big Star.  With names like these, I knew Nico would not disappoint and I was right.

Opening in December 2013 at the all new Thompson Hotel in Chicago’s Gold Coast neighborhood, Executive Chef Paul Kahan has already been nominated by the 2014 James Beard Foundation for the Who’s Who of Food and Beverage in America.  You may recognize Chef Kahan’s name because he has already made a name for himself at another hit Chicago restaurant, Avec.

Nico is on the small size with closely sat tables.  There is a chef’s kitchen counter where you can watch all of the raw seafood options on their crudo menu being prepared.  There are also tables lining the exterior windows of the restaurant for great people watching outside.  We were seated at an interior table which like I said was pretty close to our neighbors.  It turned out to be kind of nice because we could easily see other dishes people were eating and were even able to converse with the table next to us about what we liked about our menu choices.

To start, each table is presented with a complimentary bread selection with really good olive oil for dipping.  I personally loved the bread that had green olives baked into it.

For drinks, Kevin ordered one of the cocktails appropriately called the Nico. 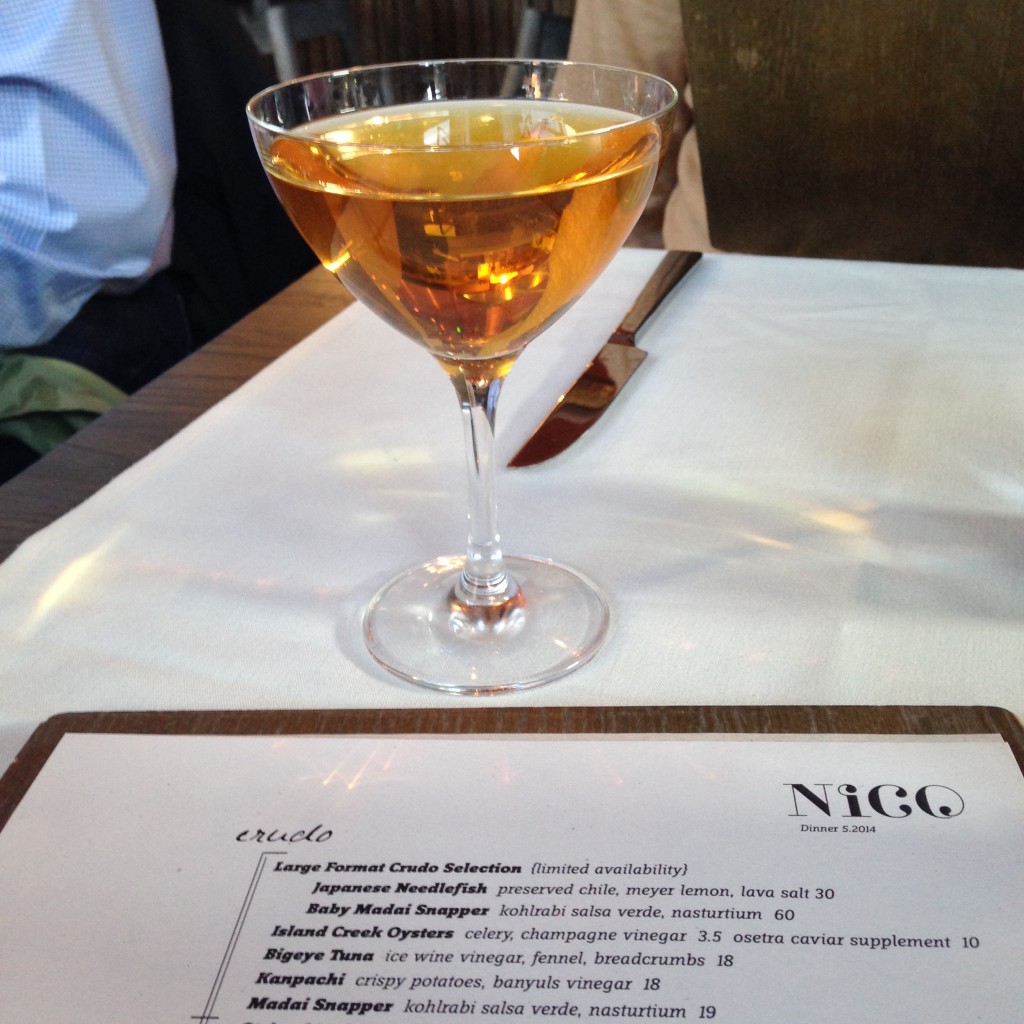 There are five sections to the menu: crudo, fettunta, antipasti, pasta, and pesce del mercato + piatti.  At the recommendation of our waitress, we ordered something from every section.

The crudo section is all raw seafood which I mentioned you can watch being prepared from the chef’s kitchen counter.  We ordered a few of the oysters to start.  The oysters came from Duxbury, MA and were absolutely delicious.  I am new to the raw oyster club and these definitely were great with a perfect salty finish from the vinegar accompaniment. 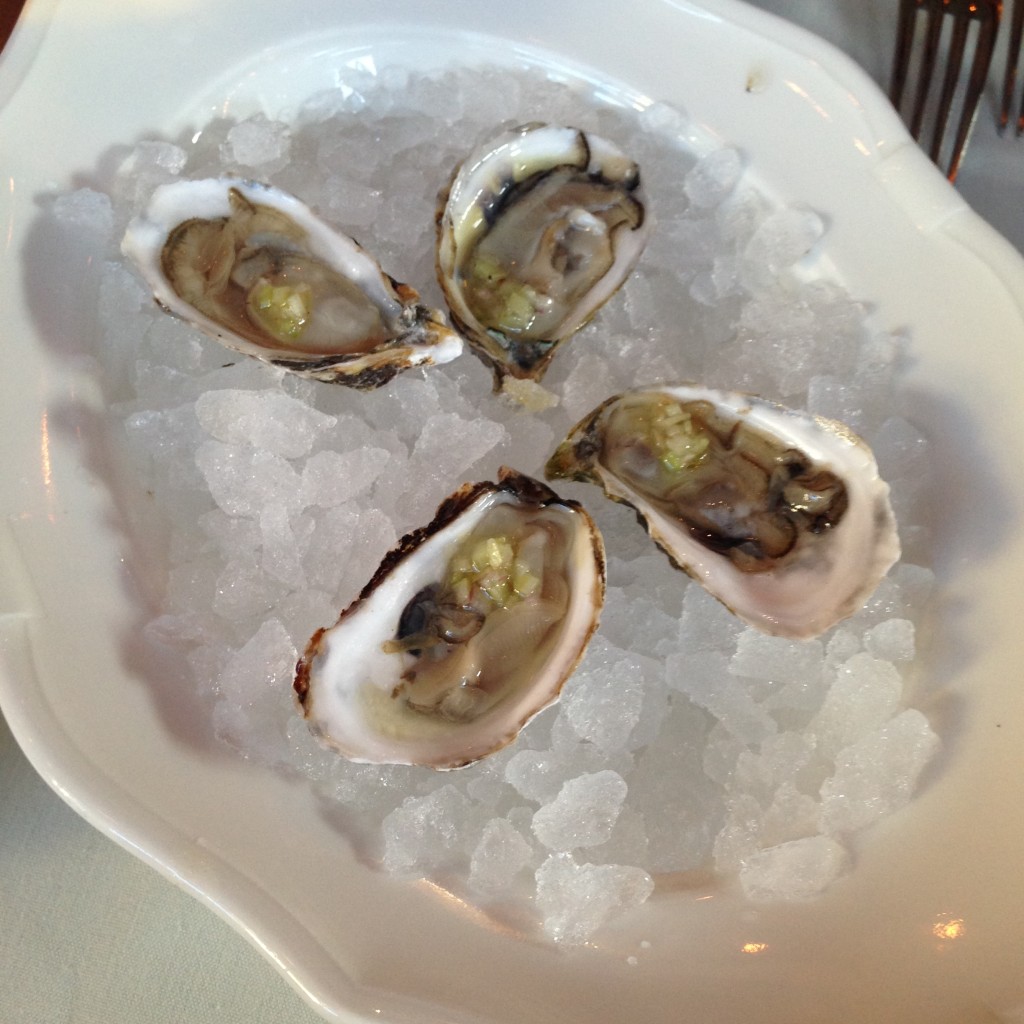 Fettunta is basically an open faced sandwich or bruschetta like appetizer.  There were so many good options on the list it was hard to choose.  We ended up ordering one called the Stracciatella at the recommendation of our waitress.  This one had brussels sprouts and burrata on it which are two of my favorite things so you know I loved this dish! 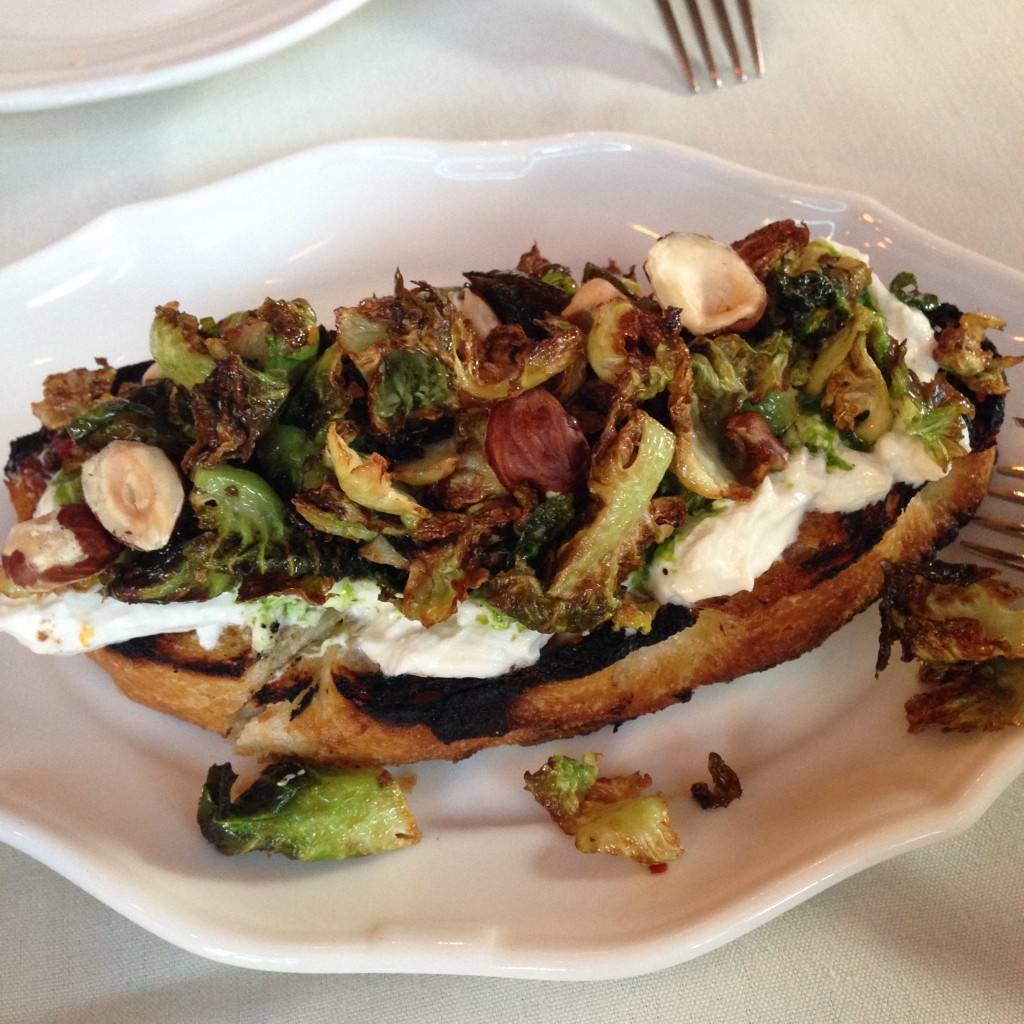 From the antipasti menu we went with the crab legs.  As soon as Kevin learned the crab legs were pre-cracked and there was no work involved, he was sold!  The crab was served warm with a pesto sauce for a very fresh taste. 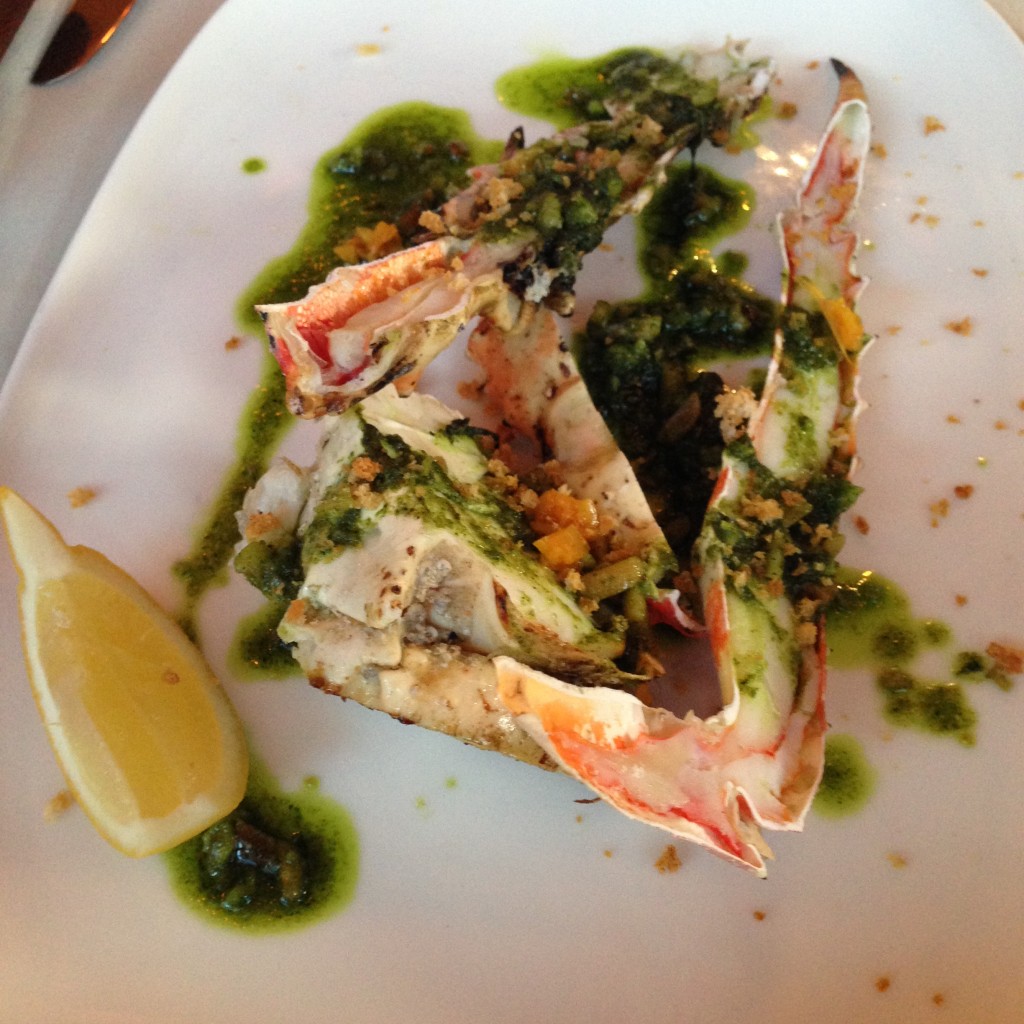 For the pasta course we went with a butternut squash filled pasta which we learned after ordering was the #2 most popular item on the entire menu for January and February.  Our waitress said the dish was supposed to go away for the spring/summer but the chef has decided to leave it on since it has been such a hit.  I love pretty much anything pasta, but Kevin who isn’t usually a fan even said this was the best pasta dish he has ever eaten! 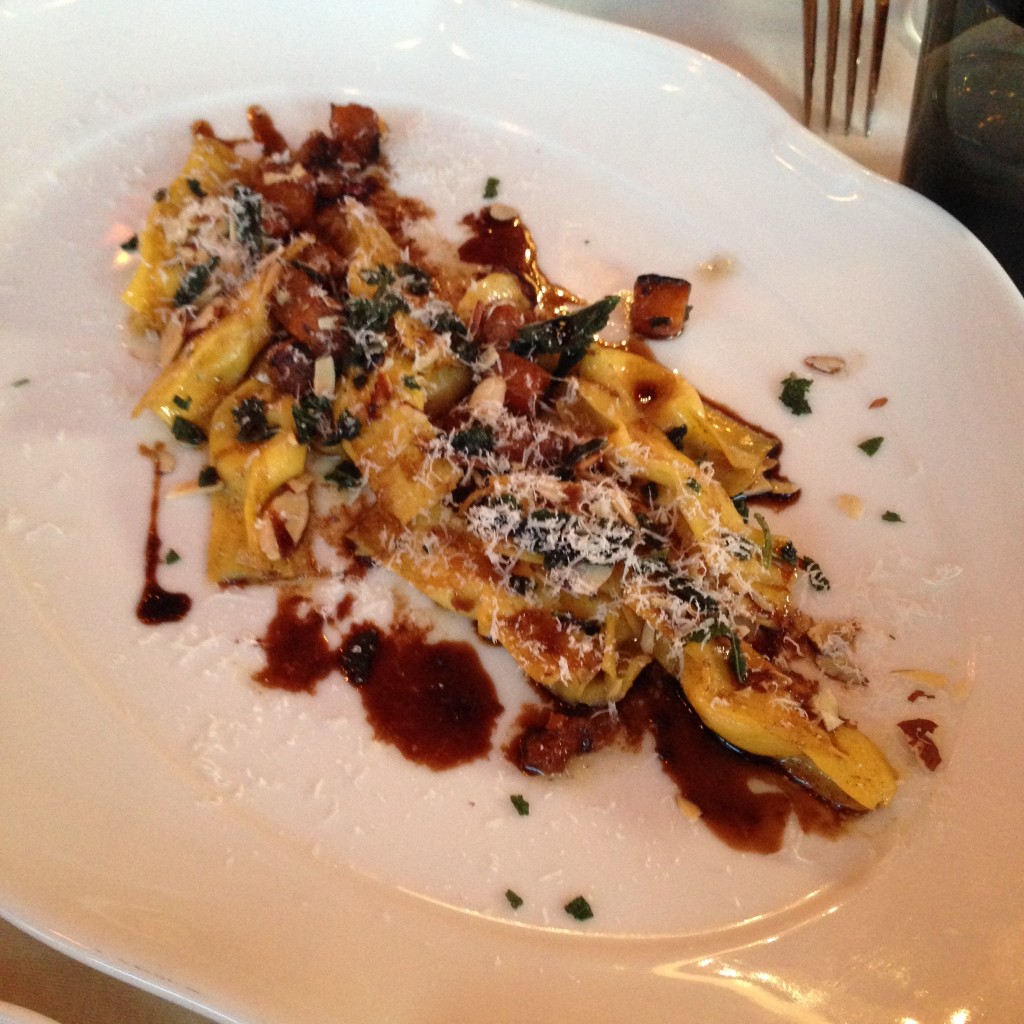 Finally onto our main entree course.  I let Kevin pick this one and he had a hard time choosing between the ribeye and the branzino.  He ultimately ended up choosing the branzino which was an excellent choice.  The fish was served European style with the head and tail still attached which was a first for the both of us.  The flavors of the salt crust plus the sweetness of the currants really added a ton of flavor to the dish.  A lot of the fish and meat options are priced per pound and our waitress did a great job of letting us know the sizes the chef had available to order that day.  The branzino was delicious and worth every penny!

As I mentioned last week, Kevin gave up sweets for lent which means no dessert for him.  I’m not a big sweets person myself but I do love ice cream!  Since there was gelato on the menu, I knew I had to try it.  I ordered a scoop of pistachio – my favorite!  Kevin ended his meal with an espresso.  Nico serves Intelligentsia coffee which is both of our favorites. 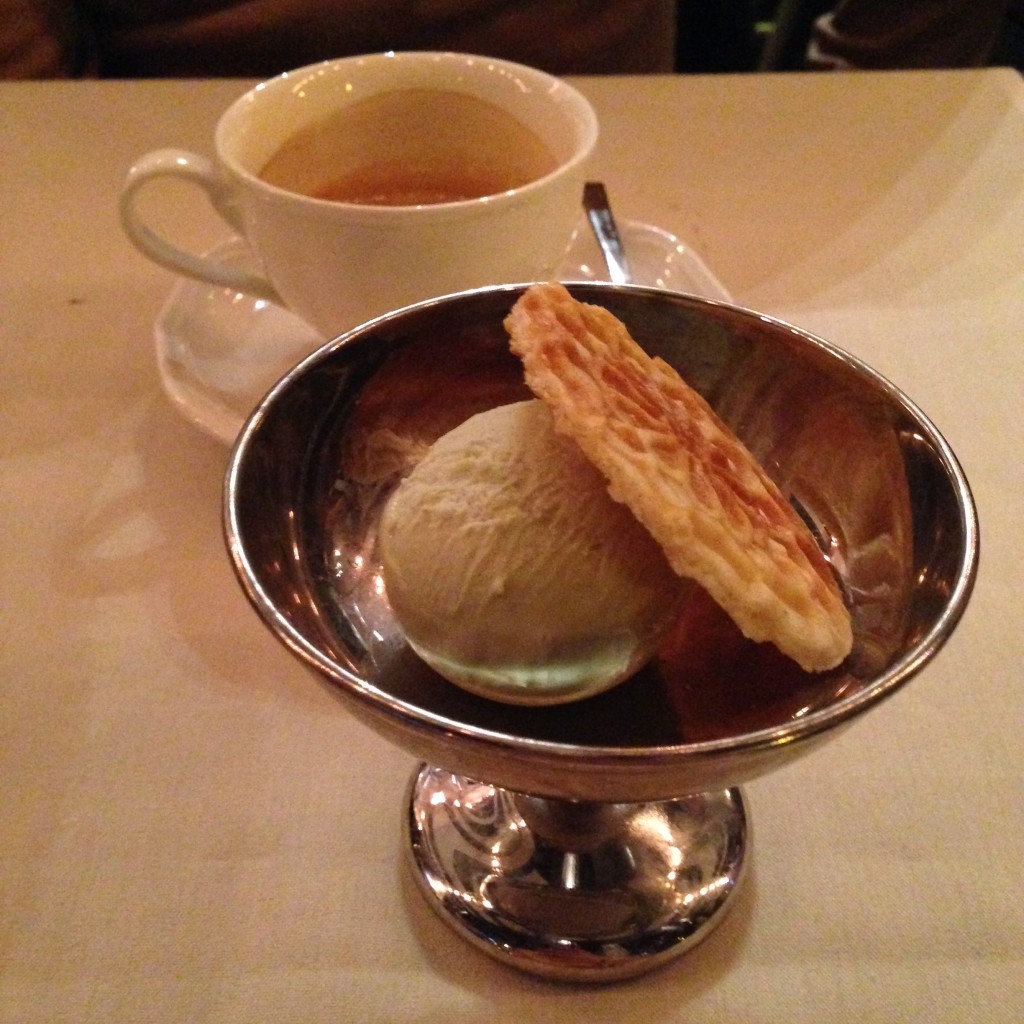 If you can’t already tell, we loved our dining experience at Nico!  From the service, to the ambience, to the food nothing fell short of excellence.  The prices are a little more than we would normally spend for a dinner out, but we will definitely be back here for any special occasions in the future.  If you haven’t checked out Nico yet, be sure to snag a reservation while you can.