Brendan Sodikoff, the mastermind behind Au Cheval, Green Street Smoked Meats and other Chicago favorites, has added another line to his already impressive resume with Cocello. 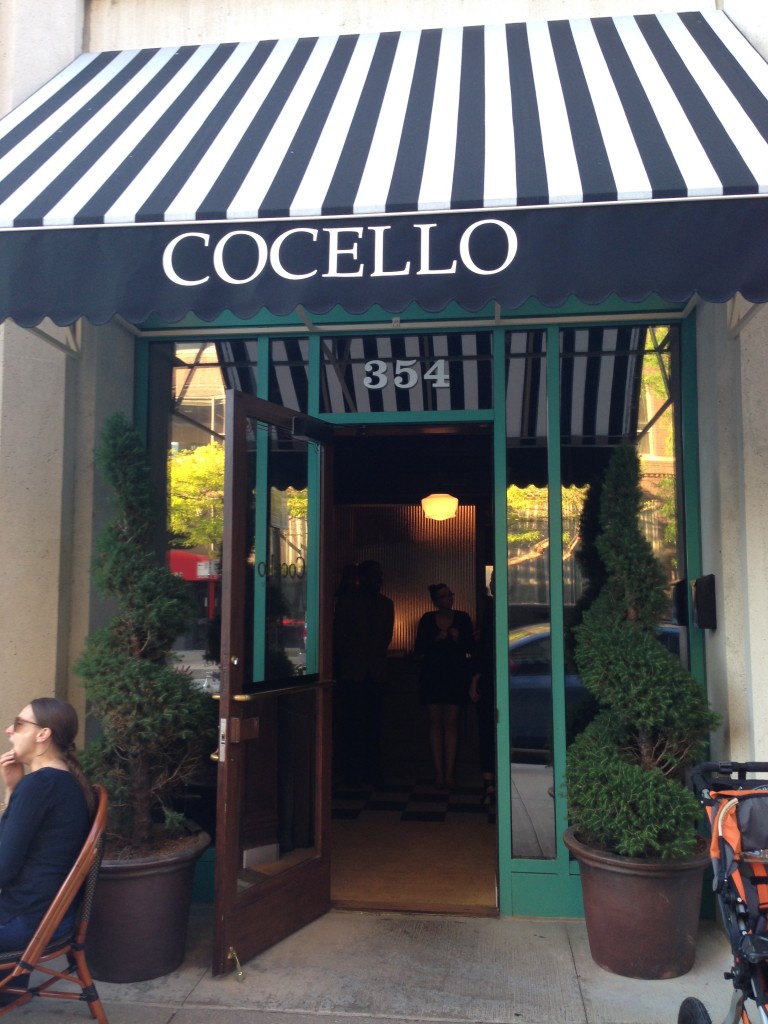 Cocello is an Italian small plates restaurant that I visited over the weekend with some girlfriends.  This new River North spot is just over a month old and is already making a name for itself.

We were seated at a table outside by request, but I did take a peak inside to check the place out.  If you’ve dined at any of Brendan’s other restaurants, you know he is partial to a dark ambiance and this one was no exception.  Dark red leather booths and dim lighting gave Cocello an old Chicago Italian steakhouse vibe. 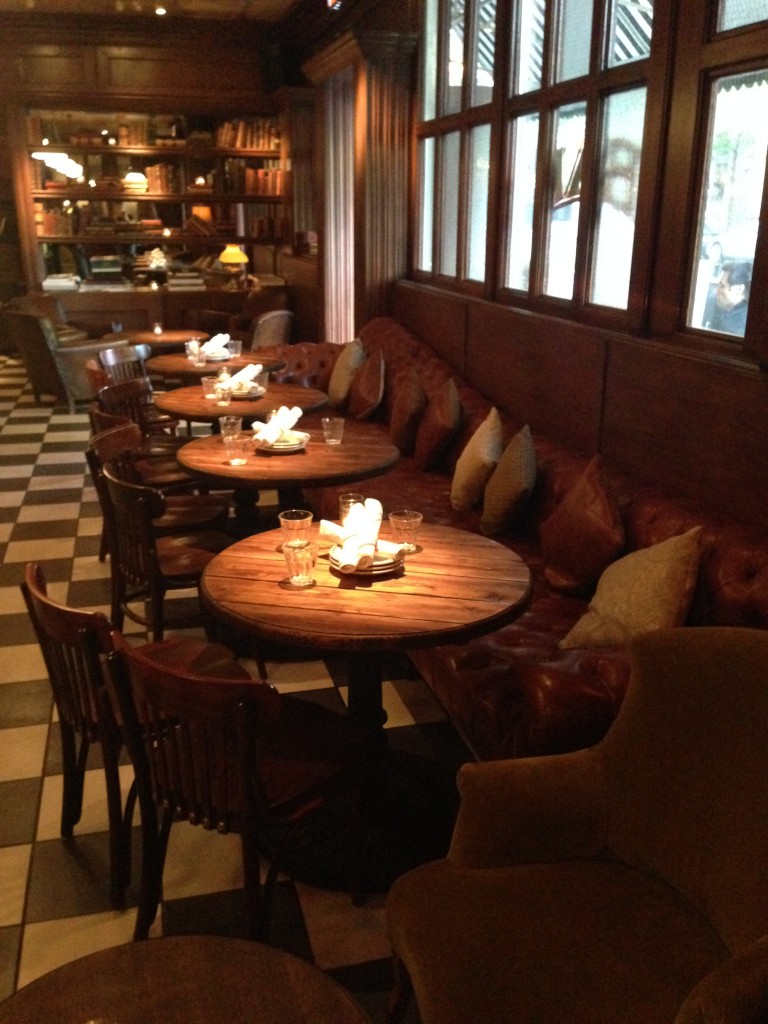 We started off our night by ordering drinks and we all agreed that Josselyn’s drink of choice stole the show!  Served in a traditional mint julep glass, the Cocello Punch, consists of rum, maraschino cherry, and grapefruit. 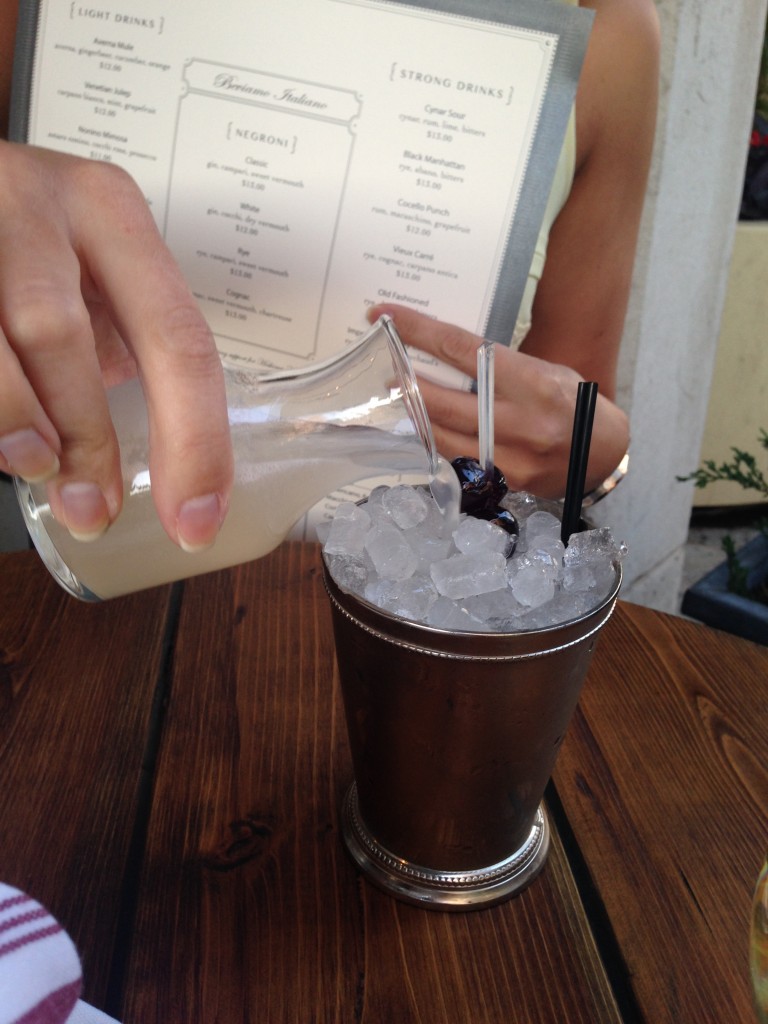 Next up we were served some complimentary bread which I forgot to take a picture of.  It tasted like a warm sourdough and rye bread that was so so tasty!  I would go back just to eat that bread alone!  For our meal, our waiter recommended we order 2-3 dishes per person for the four of us.  We went with the smaller number and were perfectly satisfied.  We ended up ordering two salads, two antipasti, and three pastas.

The first salad we ordered was called the Little Gem Hearts which consisted of romaine, shallot, herbs and Parmesan.  The romaine hearts were dressed with lemon and herbs which was so flavorful!

We also tried the Spring Vegetables which were peas and fava beans with whipped ricotta.  This also had some kind of lemony dressing on it which was a delicious combination with the creamy ricotta. 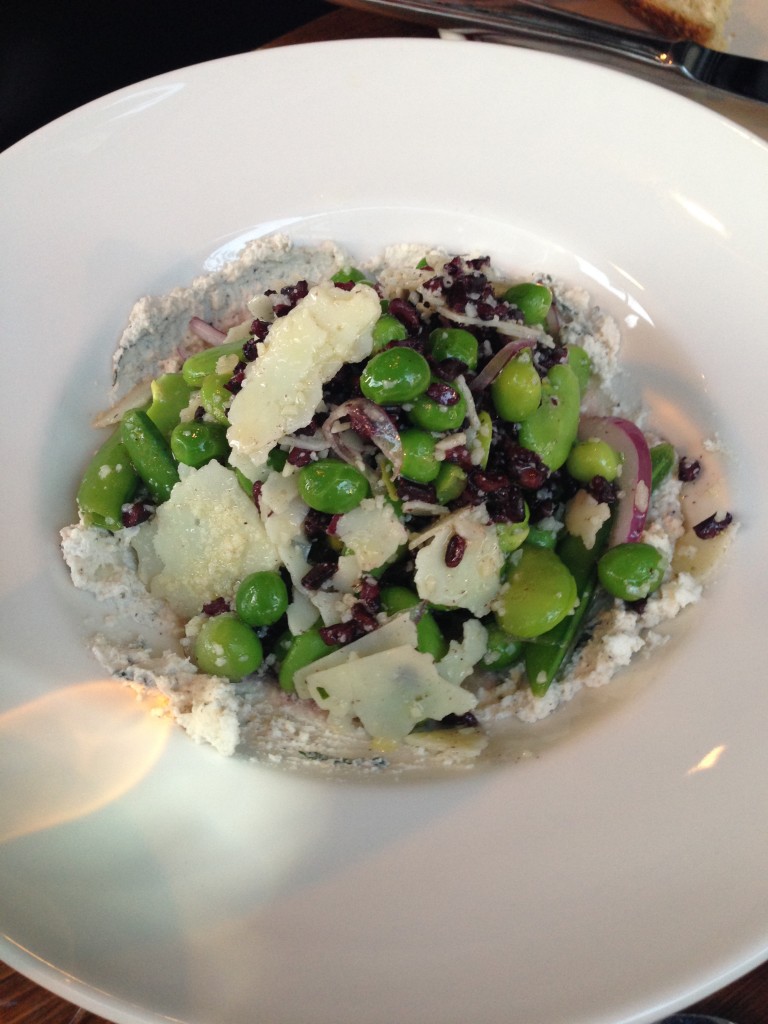 Next up was the antipasti course.  We tried the Roman-Style Artichokes which are fried artichokes with lemon and Parmesan served with a chili aioli. Even though the artichokes were fried, they did not taste greasy at all. 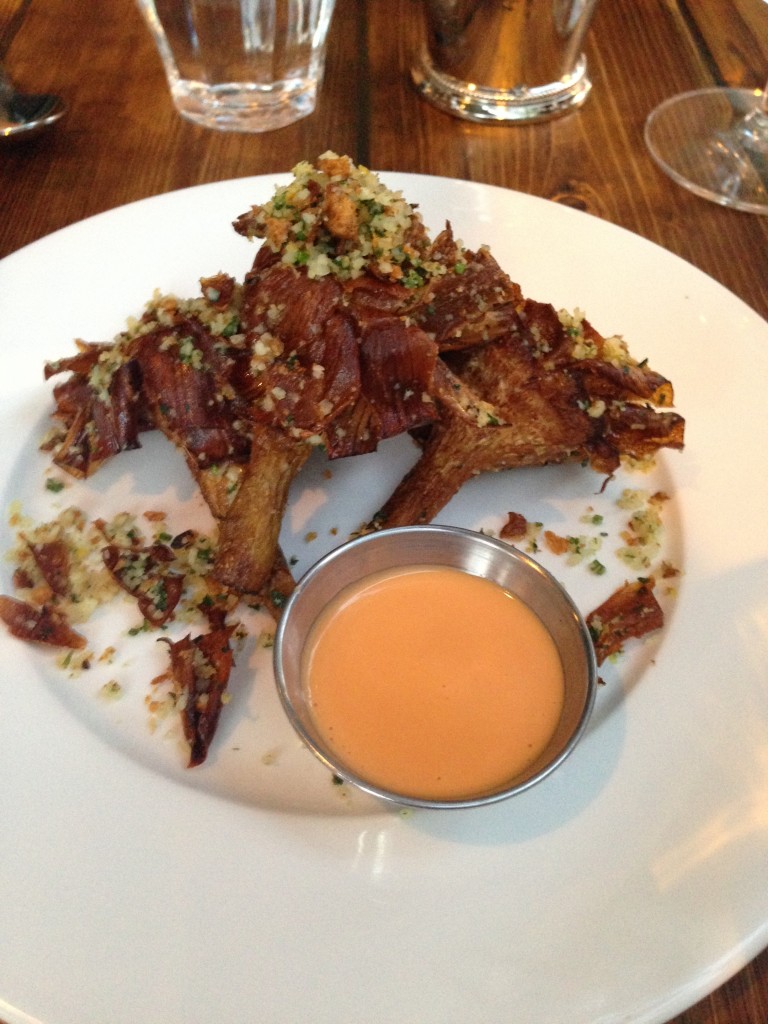 We also ordered the Polenta Fritta which is a fried polenta square topped with a poached egg and truffle.  Normally I’m not a huge fan of truffle, but the amount in this dish added so much good flavor to the polenta – I was a fan! 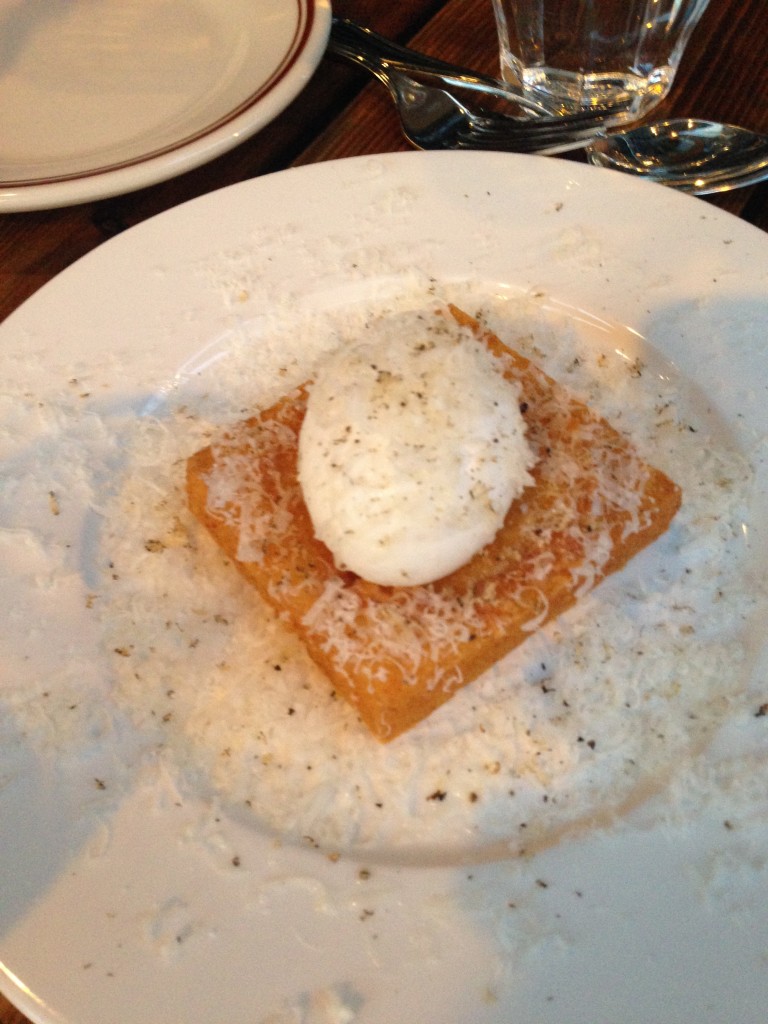 Lastly, we decided on three pasta dishes from the menu.  We went with the Ricotta Gnocchi, Orecchiette, and Risotto.  All of these were absolutely delicious, but my favorite had to be the risotto!  Not much to look at on the plate, but the flavors were so rich and creamy, I could not get enough!  The orecchiette was slightly spicy due to the sausage in the dish and the gnocchi was very light and had a much less chewy texture than most gnocchi. 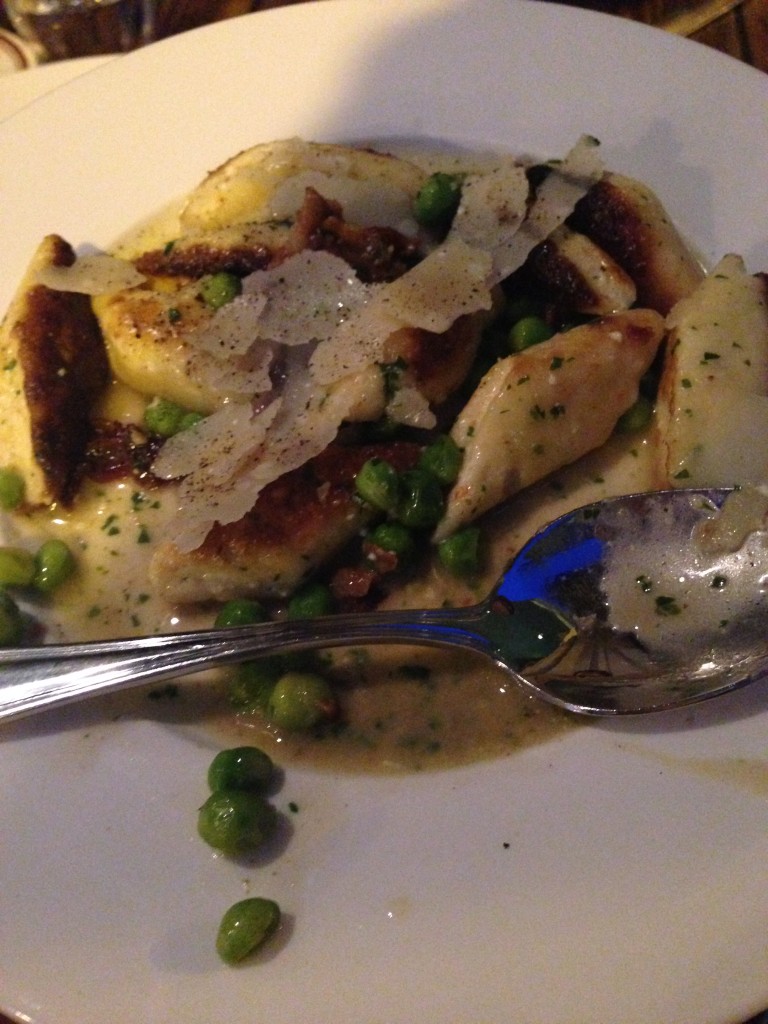 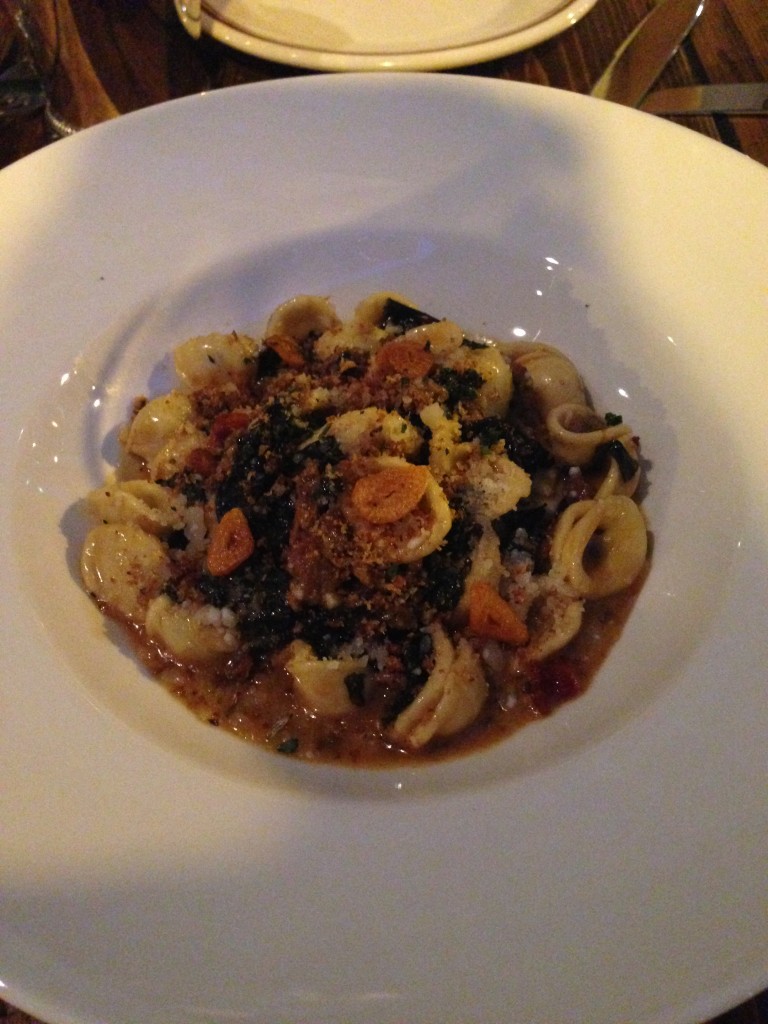 Since the day we went happened to be National Donut Day, we decided to order the donuts for dessert!  The donut bites were dipped in cinnamon sugar and came with ricotta cheese and cherries for dipping.  A perfect way to end the night! 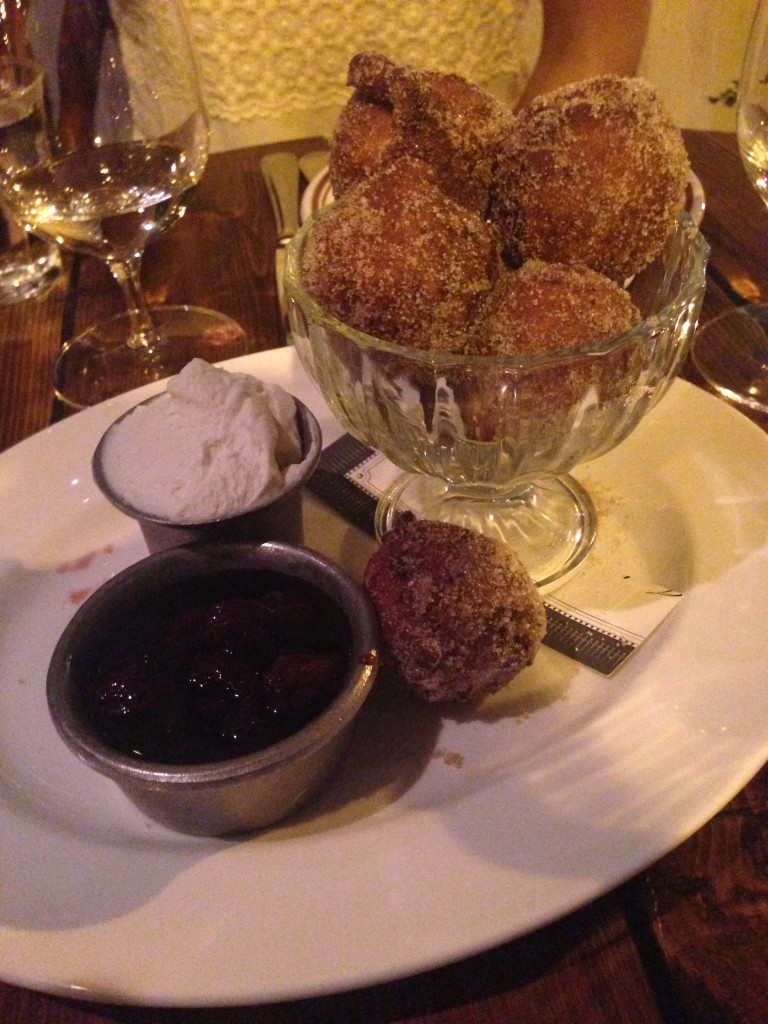 I highly recommend going to Cocello!  In addition to the sections of the menu we ordered from, they also offer meat and fish selections as well different vegetable sides.  I will definitely be back soon to try out some of their other menu items.