Happy Monday!  How was your weekend?  We had a jam packed weekend full of fun and didn’t get home until late last night (thus the reason for this untimely post)!  I’m so excited to share the details of our weekend with you!  Here is what we were up to:

I took a half day at work to head home and pack up everything we needed for our tailgate on Saturday.  Our friends, Jacki and Dan, were flying into Chicago from Florida but due to the craziness that happened on Friday that delayed/cancelled a lot of flights in Chicago, their flight kept getting pushed back so I had a little extra time in the afternoon and decided to get a much overdue mani/pedi. 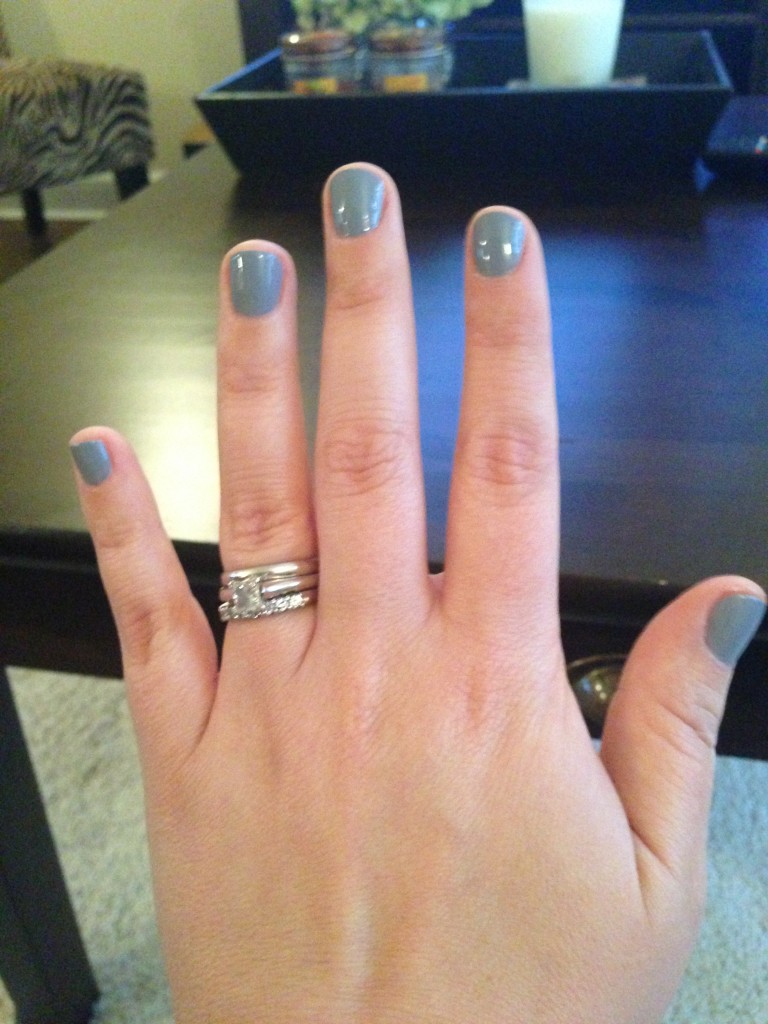 Eventually, Jacki and Dan ended up flying into Cincinnati and driving to West Lafayette so Kevin and I headed down on our own and made it in on Friday night around 10 PM.  We checked into our hotel room and called it a night since we had to be up early for tailgating the next morning.  Unfortunately, our other friends, Erin and Scott, who were coming from Minneapolis weren’t so lucky and their flight got cancelled and had no other options of getting there so didn’t make it down this year. 🙁

Since the game started at noon, the tailgating fields opened up at 7 AM and we were there bright and early to stake out our spot.  It was so early the sun wasn’t even out yet and the lights were on at the field.  We did get to see a beautiful sunrise though. 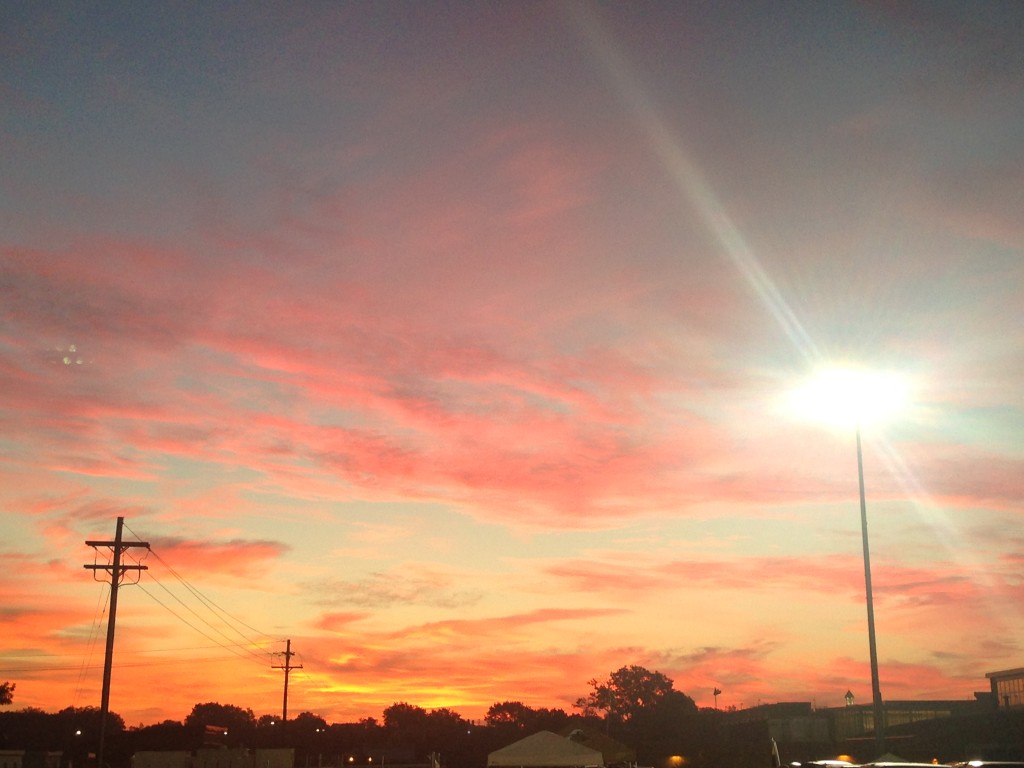 We stopped in at Panera and grabbed a bagel pack and coffee for the breakfast portion of our tailgate and spent the first couple of hours under blankets because it was still a little chilly out. 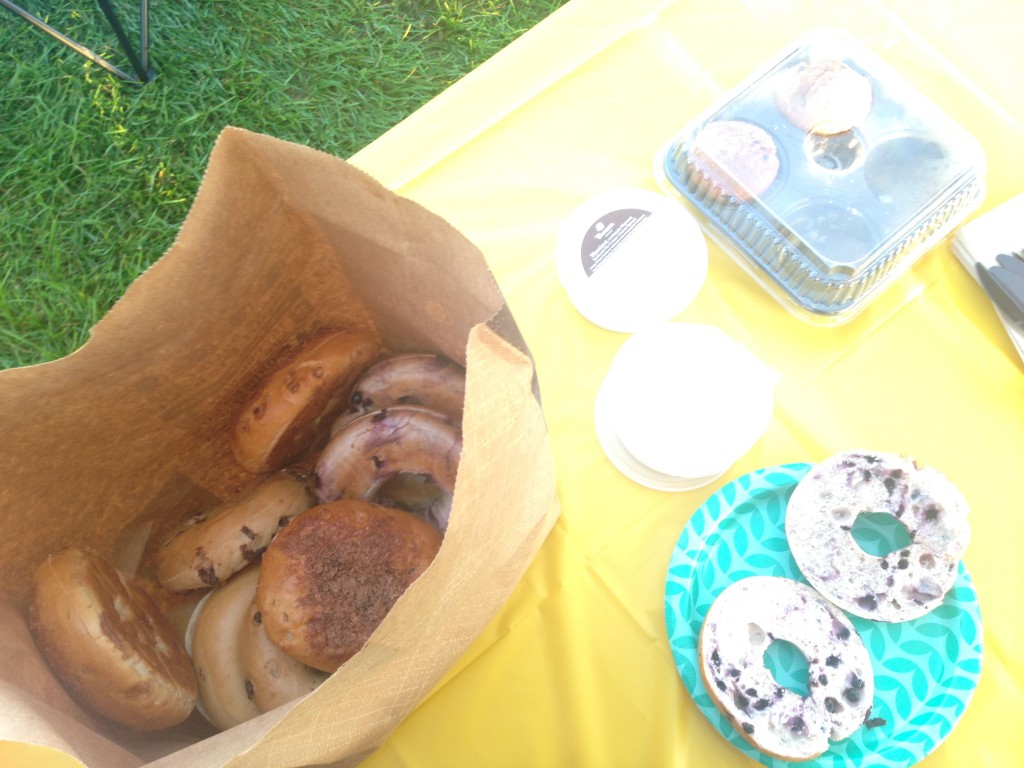 Eventually the sun came out and it was a gorgeous 80 degree day!  A couple of guys from our group went to the game, but most of us decided just to tailgate all day.  We spent all day outside grilling, eating, playing cornhole, throwing around the football, and just catching up with each other.  We had such a great time! 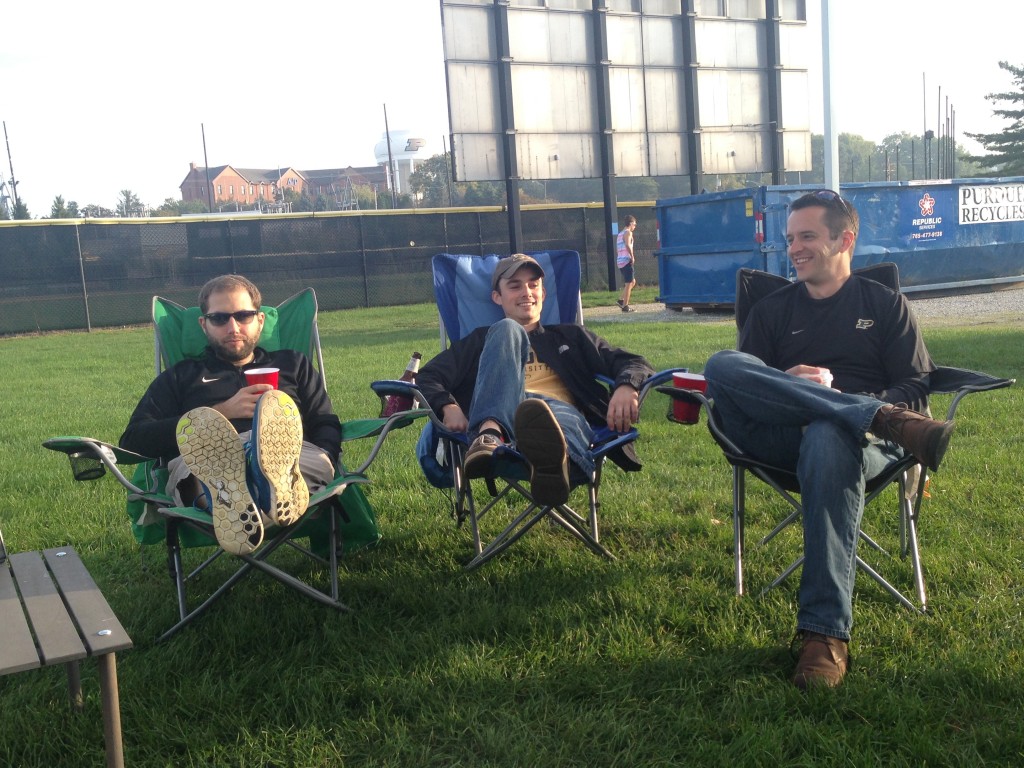 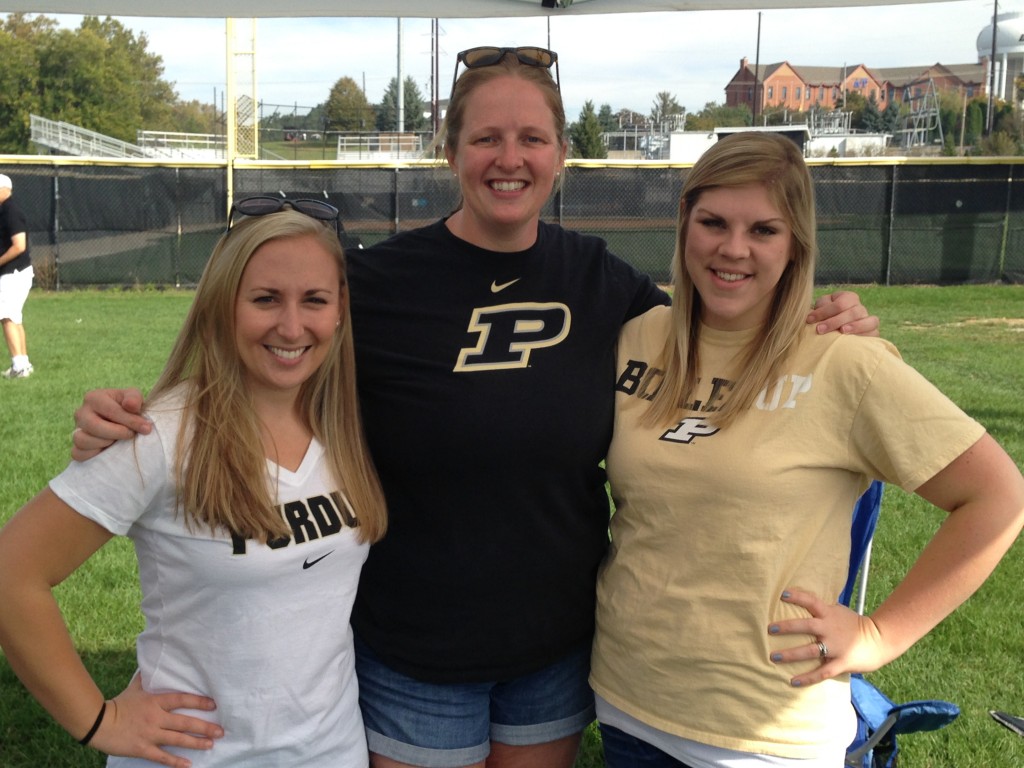 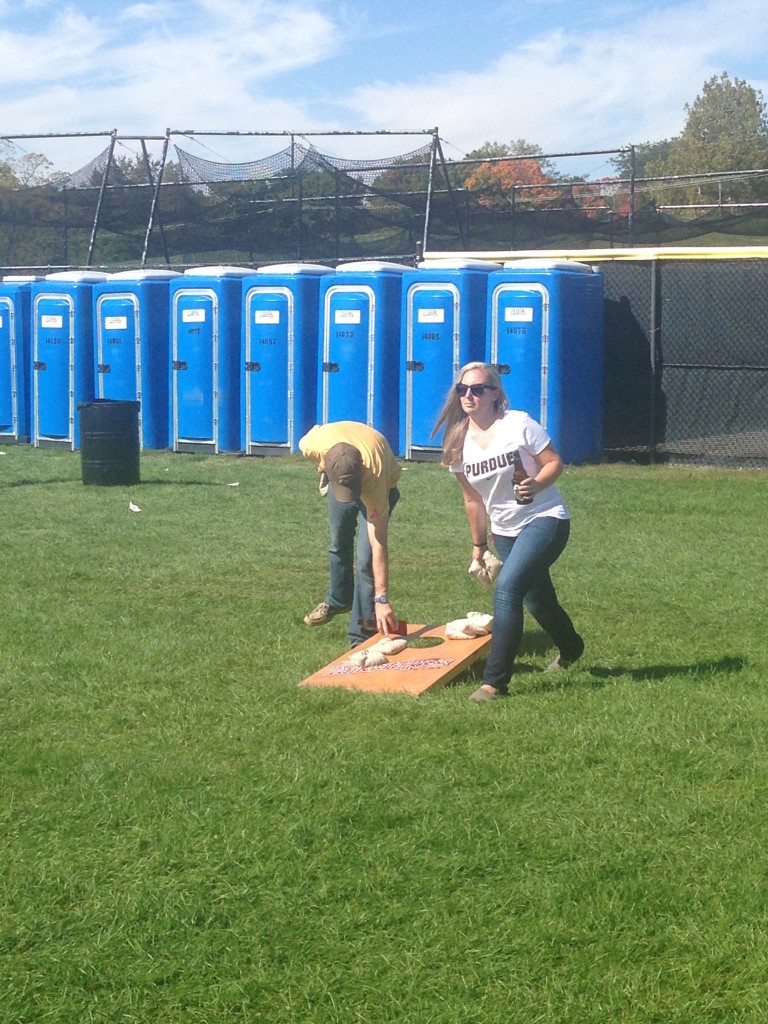 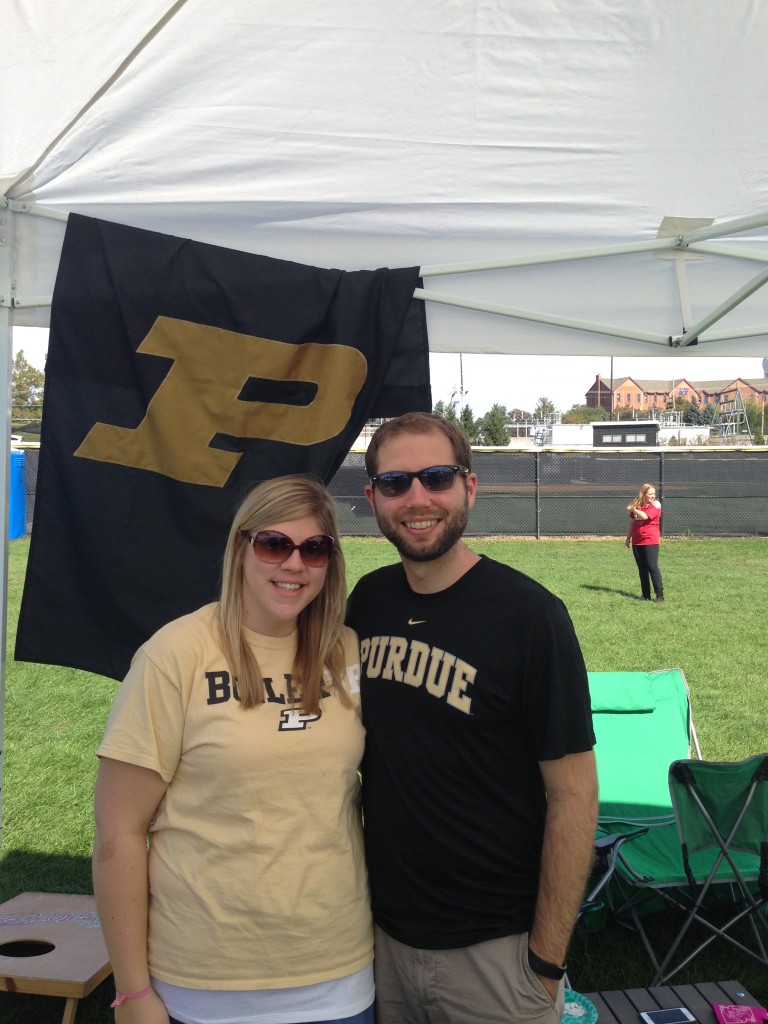 Besides being back for Homecoming, it was a great weekend because Sunday was Jacki’s 30th birthday so we got to celebrate with her all weekend!  I made funfetti (the best!) cupcakes for our tailgate.  Happy Birthday, Jacki! 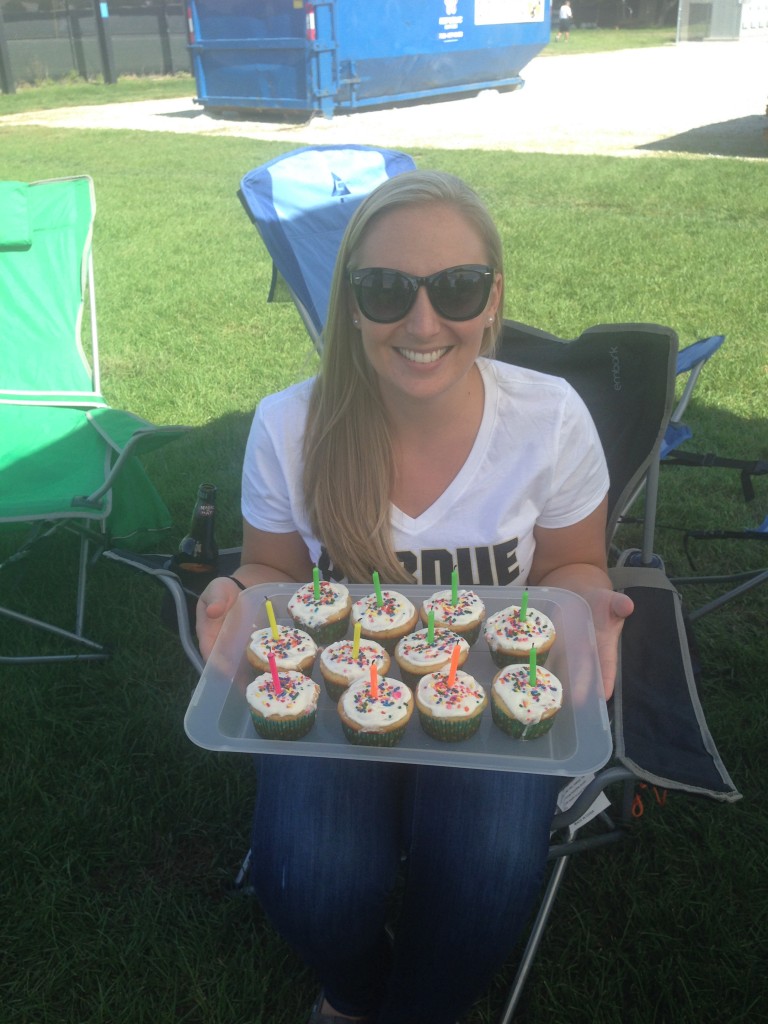 After a day of tailgating, we drove around campus and explored all of the new buildings and athletic facilities that have been built since we were students there.  It’s amazing how much has changed in the last few years!  Purdue’s campus is so pretty, especially in the fall, and every time I go back for a visit I get so homesick! 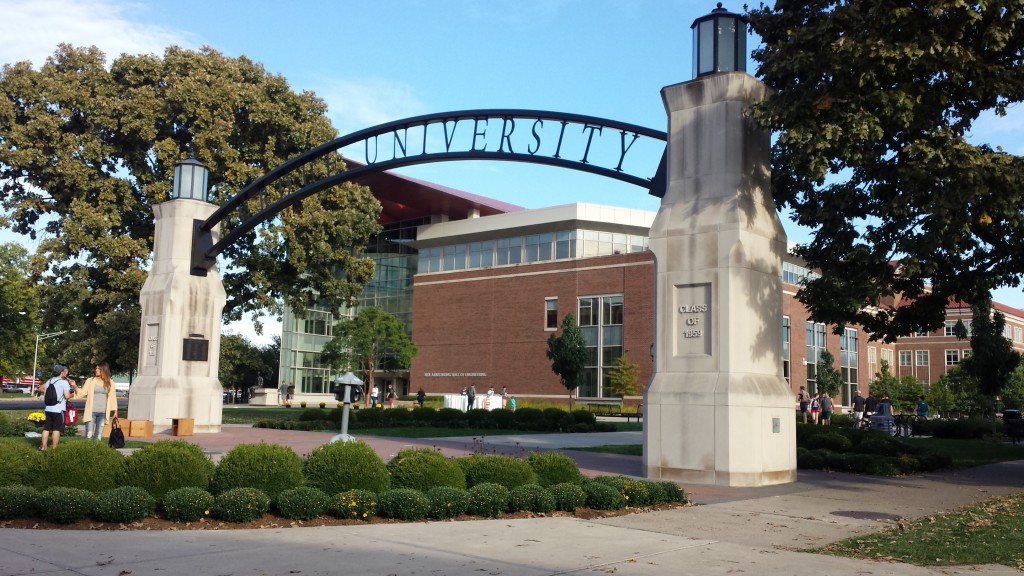 We headed to one of our favorite campus spots, HotBox Pizza, for a dinner of champions – breadsticks and cheese or as we like to call it “cheese, cheese, ranch”.  Seriously so good!

My sister recently moved back to West Lafayette for a job at Purdue so I went over to check out her new house on campus.  It is so cute on the inside and I am slightly jealous she is back living on campus!

Later that evening, I met back up with the rest of the crew at our favorite campus bar, Harry’s.  You will always run into at least one person you know every time you go there including everyone’s favorite, Robbie Hummel! 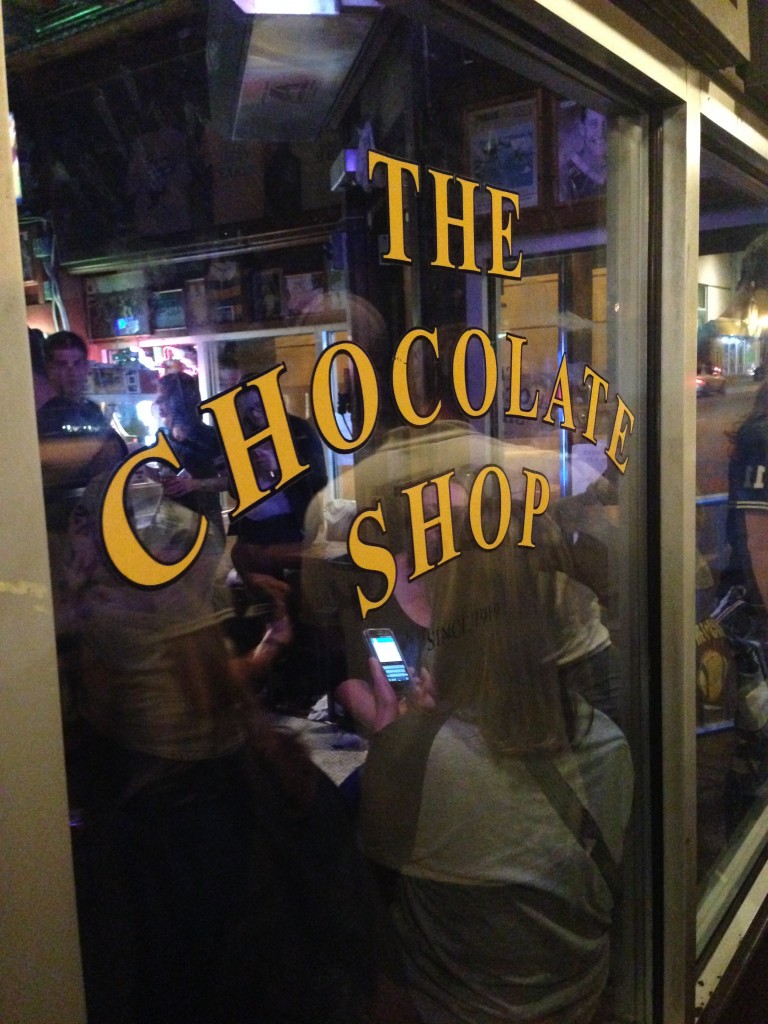 I only lasted about an hour inside of Harry’s before I realized I am too old for having to yell over loud music to have a conversation so the birthday girl and I headed across the street for some fro-yo at Orange Leaf.  I tried pumpkin pie yogurt which was amazing!  And how cool are these cup dividers they have so your flavors don’t mix together?

After a long day on Saturday, it felt nice to sleep in until 8 AM.  We hit up Starbucks and Panera for some coffee and tea and then headed to brunch at Sunset Grill.  Little did Jacki know, her mom had planned this brunch for her and both of her parents drove down that morning from South Bend to surprise her for her birthday!  Jacki was so shocked and it was a great surprise!  The restaurant even surprised her with a special birthday dessert! 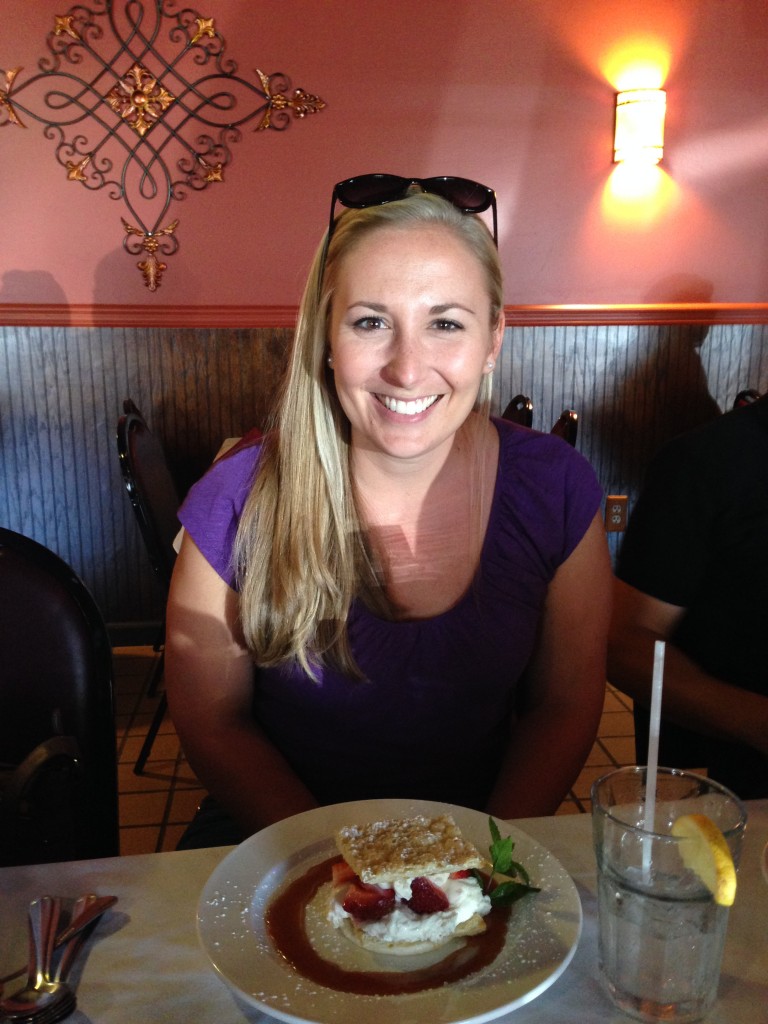 After brunch I headed over to my parents’ house for a little bit to visit.  They were participating in an Alzheimer’s walk that afternoon with my sister so I didn’t stay for long.

After a short visit, we hit the road back to Chicago.  Jacki and Dan came back with us and we spent the rest of the day celebrating her birthday in the city.  Our first stop was to The Twisted Baker in Old Town for some cheesecake.  The birthday girl’s favorite dessert is cheesecake and Twisted Baker’s is the best!  Take a look at that graham cracker crust! 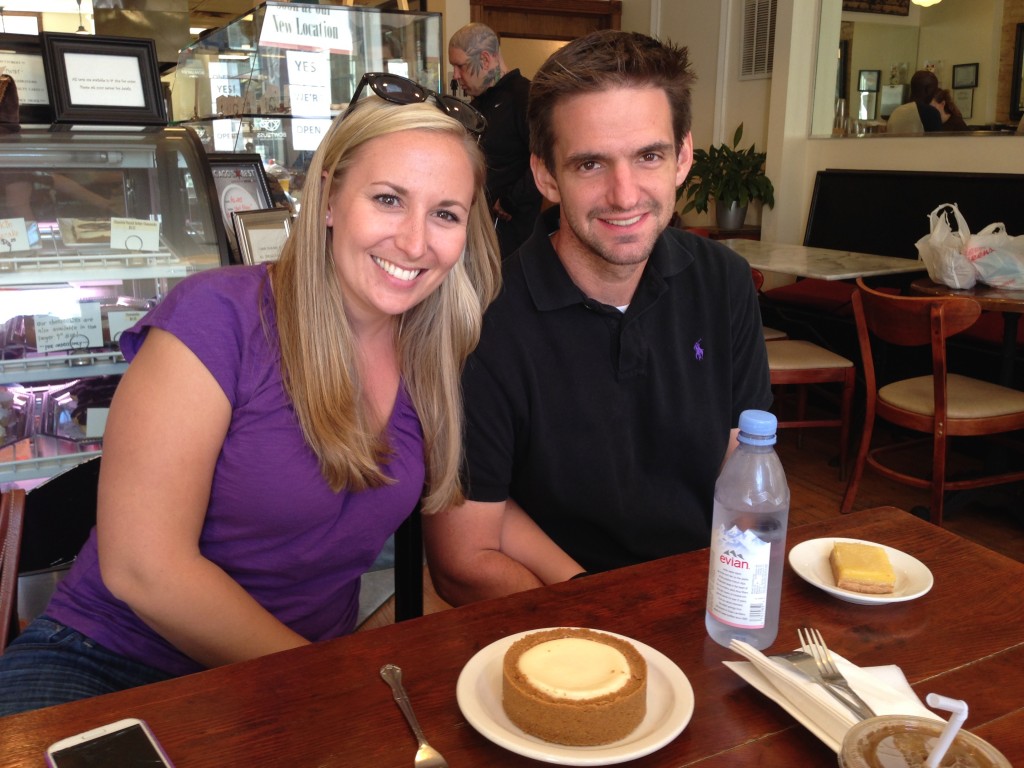 Our next stop was to City Winery in the West Loop.  Jacki also loves red wine so I knew I wanted to take her here the next time she visited.  The winery has 14 different wines on tap that they make on location.  They have a beautiful outdoor patio and even have a space for concerts inside.  We also learned from our waitress that they have their own beehive on the roof where they make their own honey.  We ordered a cheese plate to go with the drinks and sat outside enjoying the nice weather.  The one thing that was disappointing about the place is they don’t offer wine flights which was surprising to me. 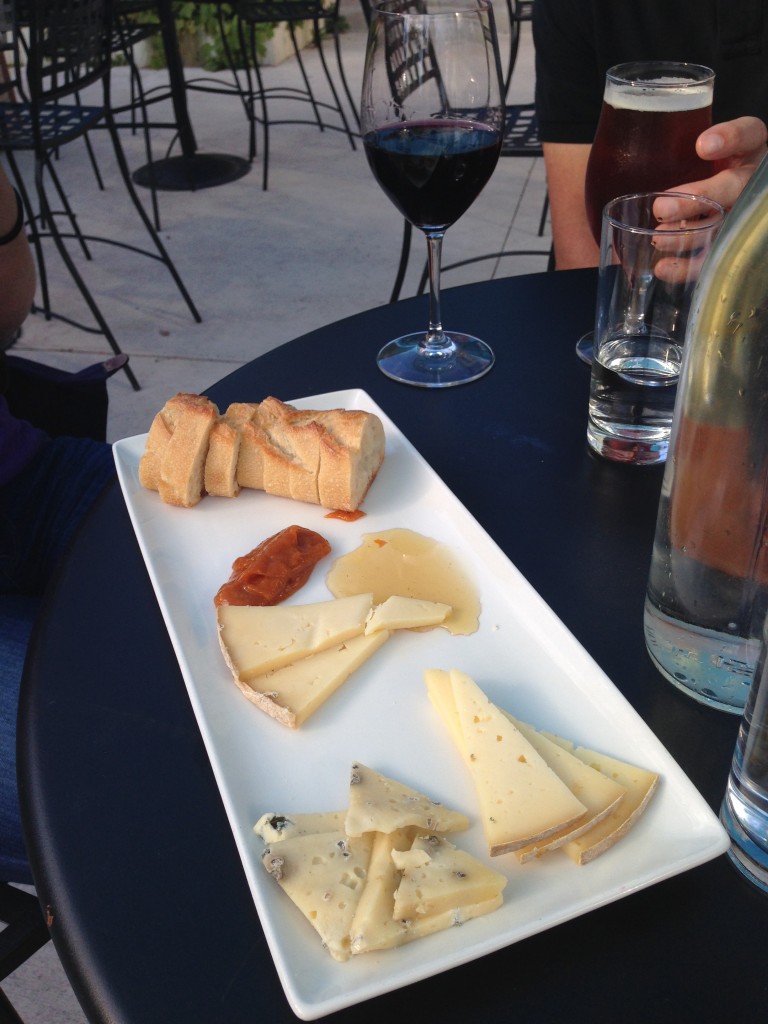 After our stop at the winery, we had about an hour until our dinner reservation so we walked down Randolph St. and stopped in the Lone Wolf Tavern for another drink.

Dinner was at one of my favorite Chicago restaurants, RPM Italian.  RPM was created by Bill and Giuliana Rancic and has such great food!  We ordered a bunch of different Italian small plates including some delicious pastas!  Full review on this restaurant coming soon. 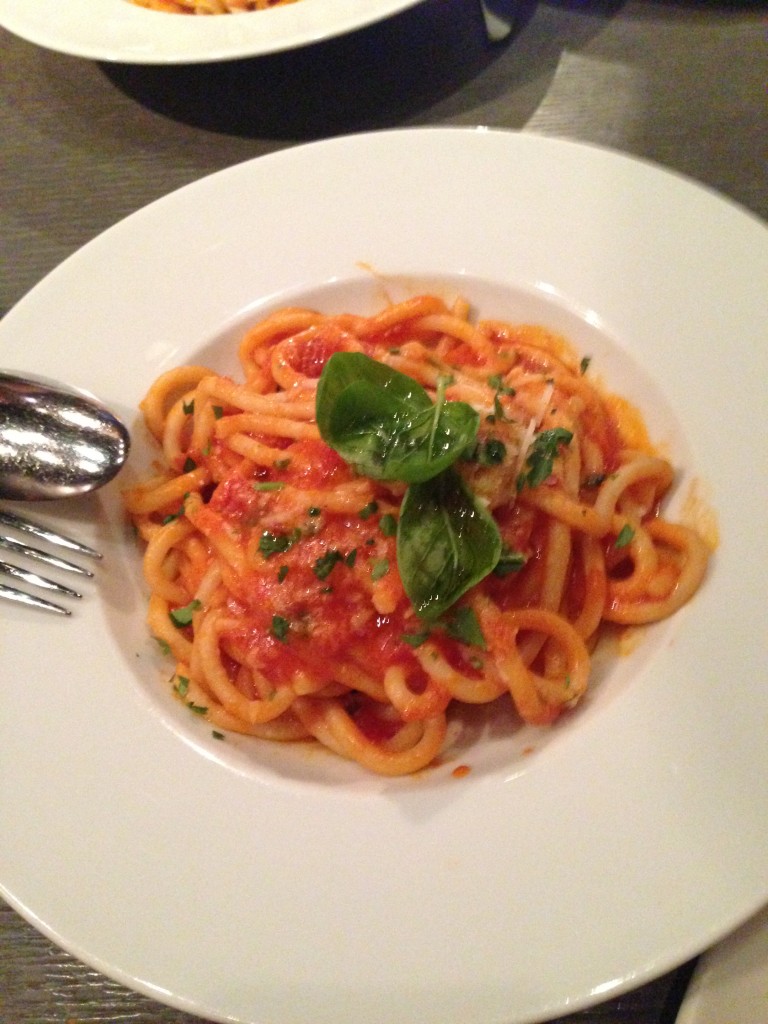 As if we hadn’t already eaten enough dessert this weekend, our waitress was so sweet and brought out a special birthday treat for Jacki – mini gelato cones!  We were all trying to figure out how they knew it was her birthday since we all swore we didn’t say anything to the waitress so we finally asked and apparently it said that we were celebrating a birthday on the reservation and she just guessed right by placing the dessert in front of Jacki.  I was thoroughly impressed by this for some reason and could not get over our great service! 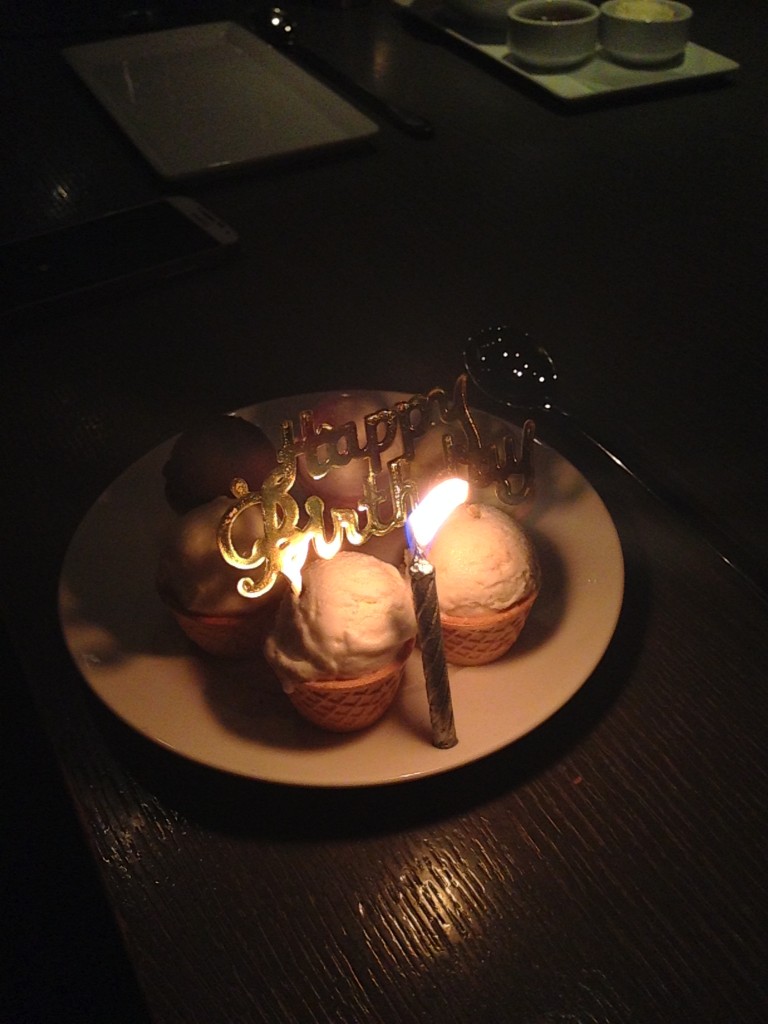 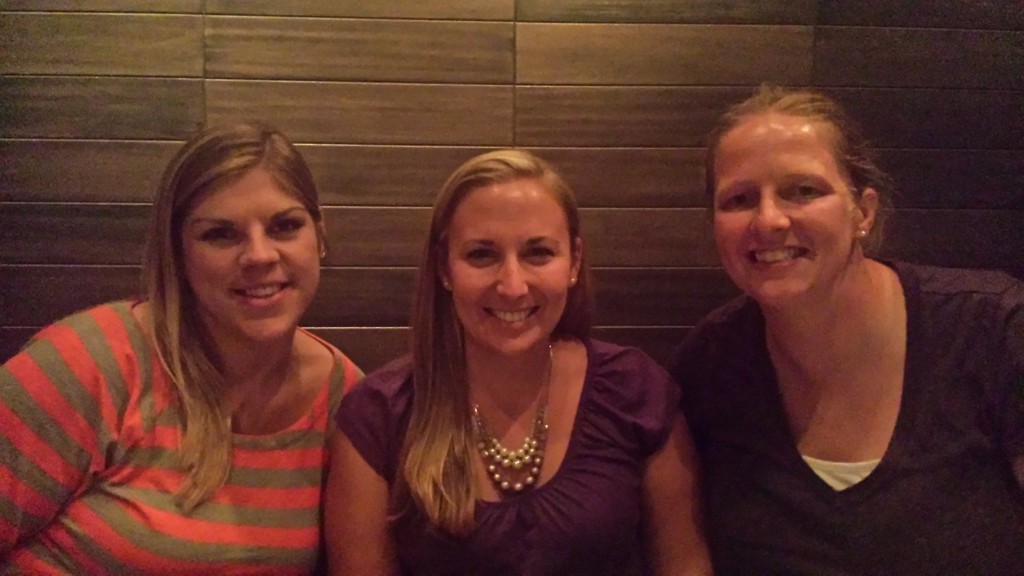 After dinner we headed home and called it a night.  Jacki and Dan had to be up early for a 6 AM flight back to Florida and sadly we all had to go back to work today.

I had such a fun time visiting with friends this weekend and am always sad when our time together is over.  Homecoming was a blast (even though Purdue lost) and I was so happy I got to be with Jacki to celebrate her 30th birthday!