Good morning!  I apologize this post is coming to you so late.  We spent the weekend in Boston and didn’t get home until late on Sunday night.  I am excited to share pictures of our trip with you though.  We had an great time visiting with our friends, Jason and Brooke, who recently moved out to the Boston area from Indianapolis.  Here are some highlights of our visit with them:

FRIDAY | We landed in Boston around 9 PM and were picked up by our hosts for the weekend.  Since we got in so late, we didn’t have much planned for this evening.  Jason and Brooke live about 30 minutes outside of Boston so we headed out their way and had dinner/drinks at a bar near their apartment called Joe Sent Me before calling it a night.

SATURDAY | We woke up early to head into the city since we had a full day of touring planned.  We rode the “T” which is what they call their public transit system in Boston.  Our first stop was the Boston Common which is the oldest city park in the United States and was used as a camp by the British before the American Revolutionary War. 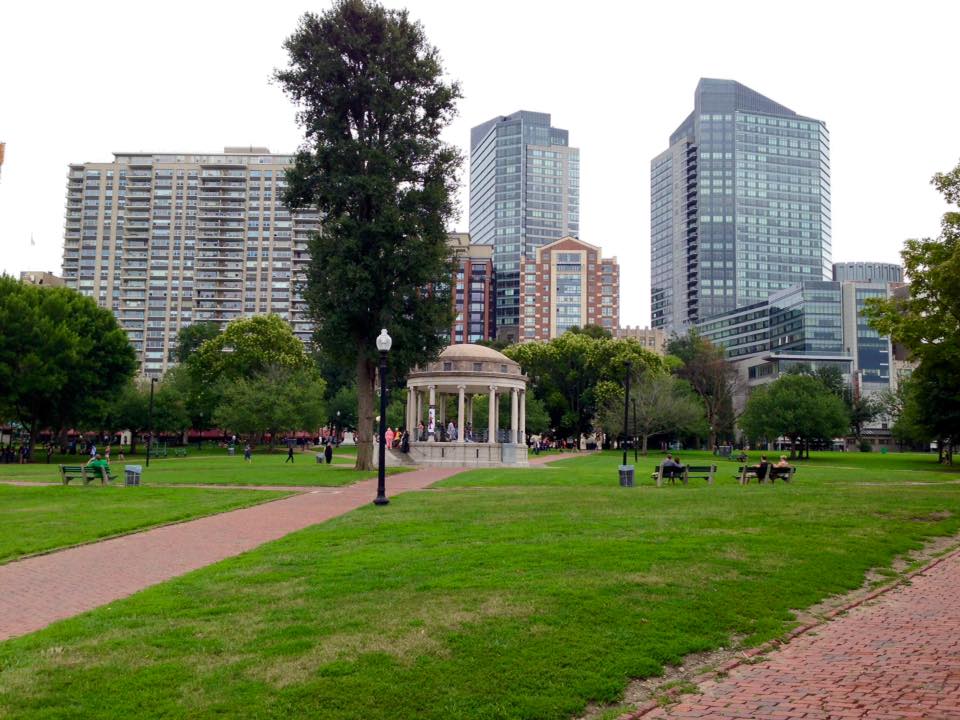 Near the Boston Common is the famous Cheers bar so we had to stop in for a drink.  Kevin was the only one of us who actually watched the show Cheers so this was definitely a highlight for him. 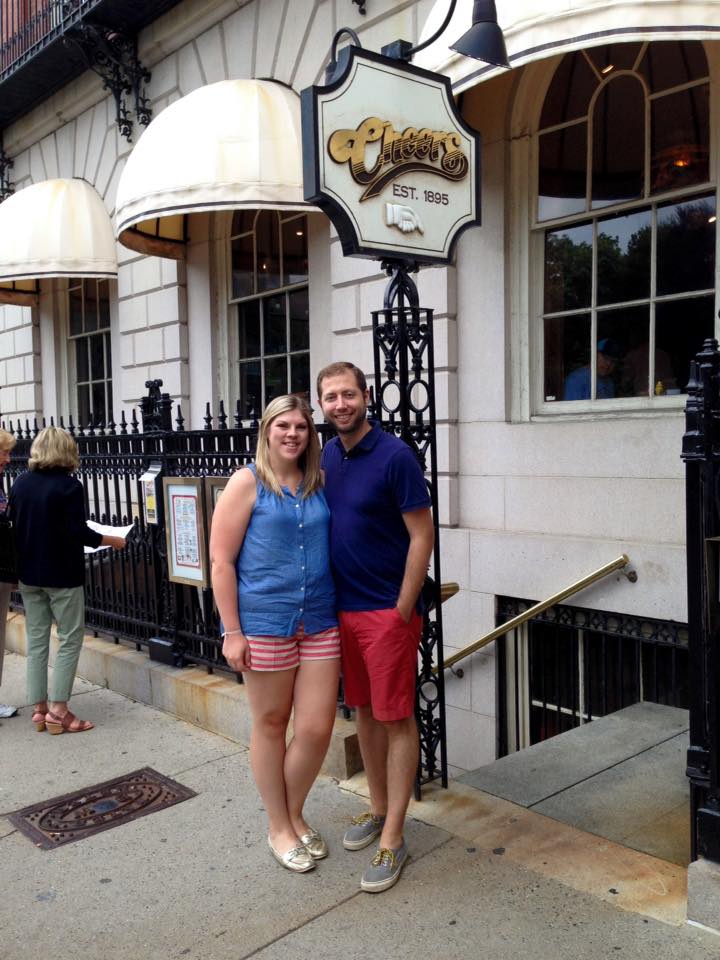 Next stop on the tour was the Public Garden which was the first public botanical garden in America.  The grounds are absolutely beautiful and this was one of my favorite stops we made. 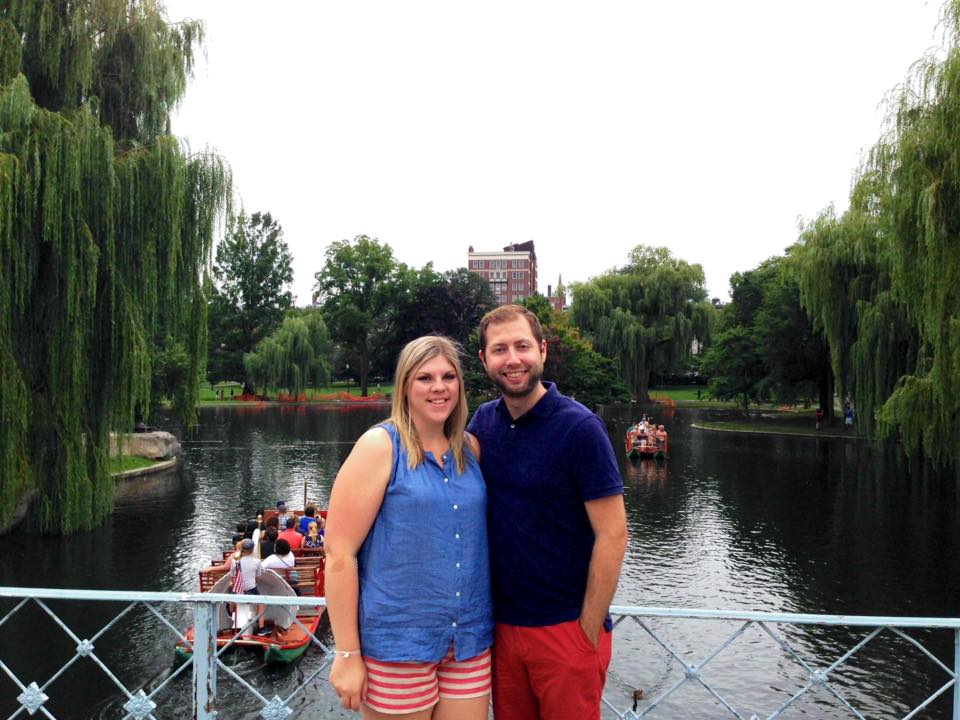 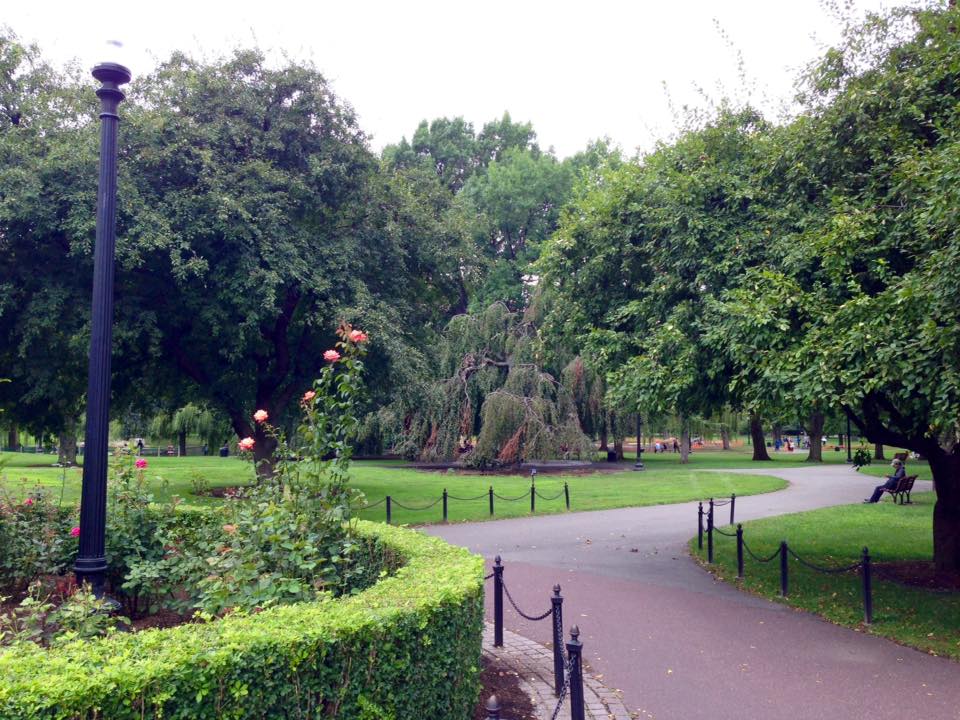 After the Public Garden we headed back across the street to Boston Common to start our journey along the Freedom Trail. 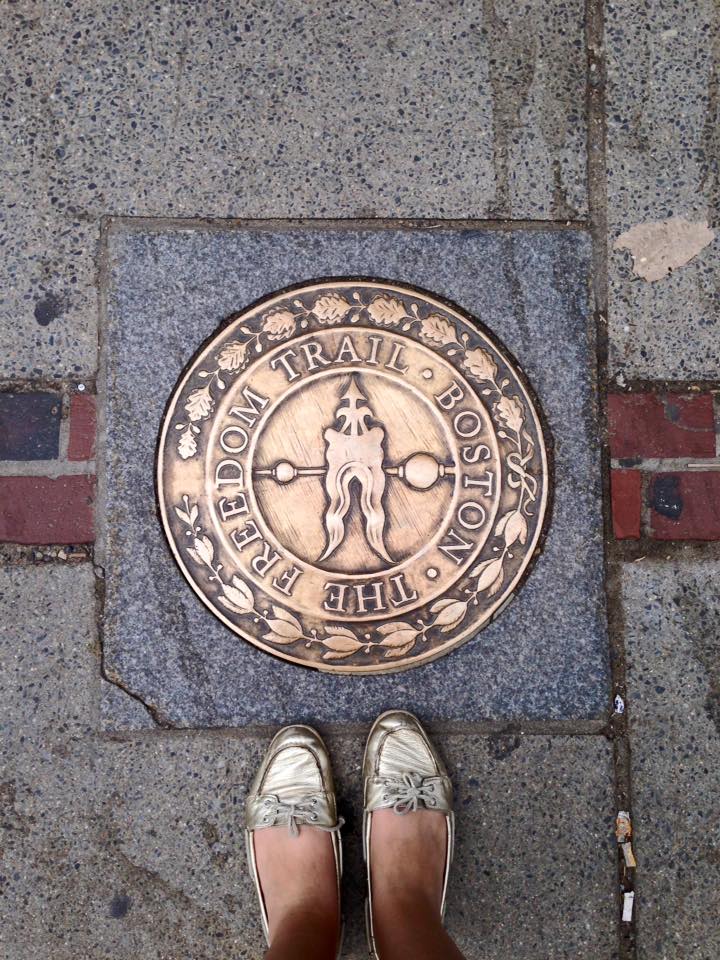 The Freedom Trail is a 2.5 mile long path through Boston with 16 stops that are all significant to U.S. history.  I really enjoyed doing this and loved seeing all of the history of our country along the way.  I would love to go back and spend a lot more time at each stop.

Some of the places along the trail include the Massachusetts State House. 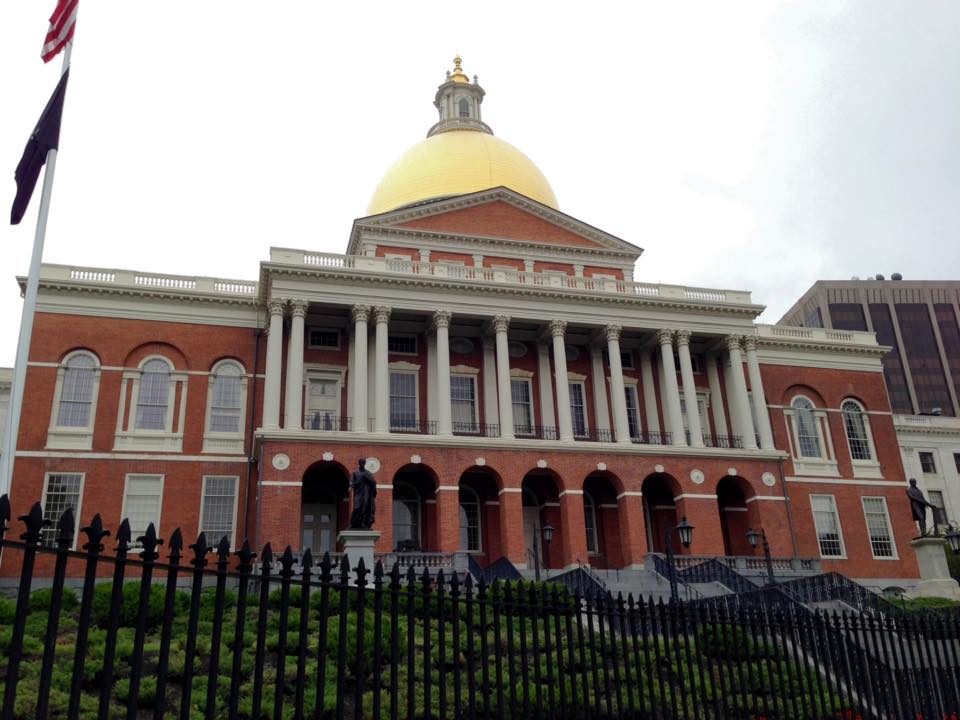 The Granary Burial Ground which is where Paul Revere and John Hancock are buried. 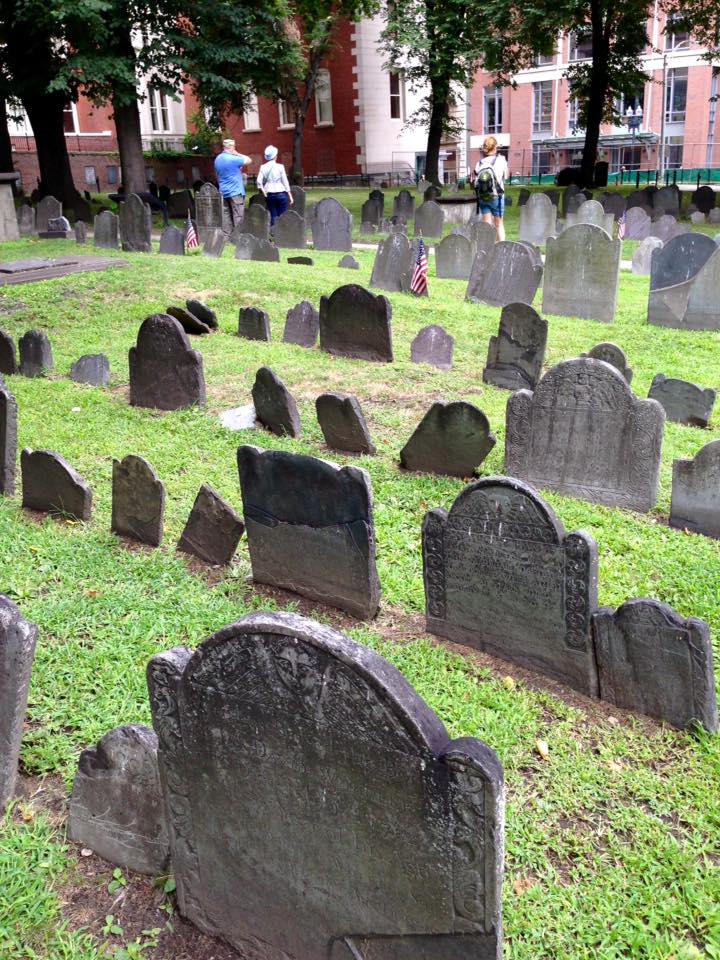 The Old South Meeting House which was the organizing point for the Boston Tea Party. 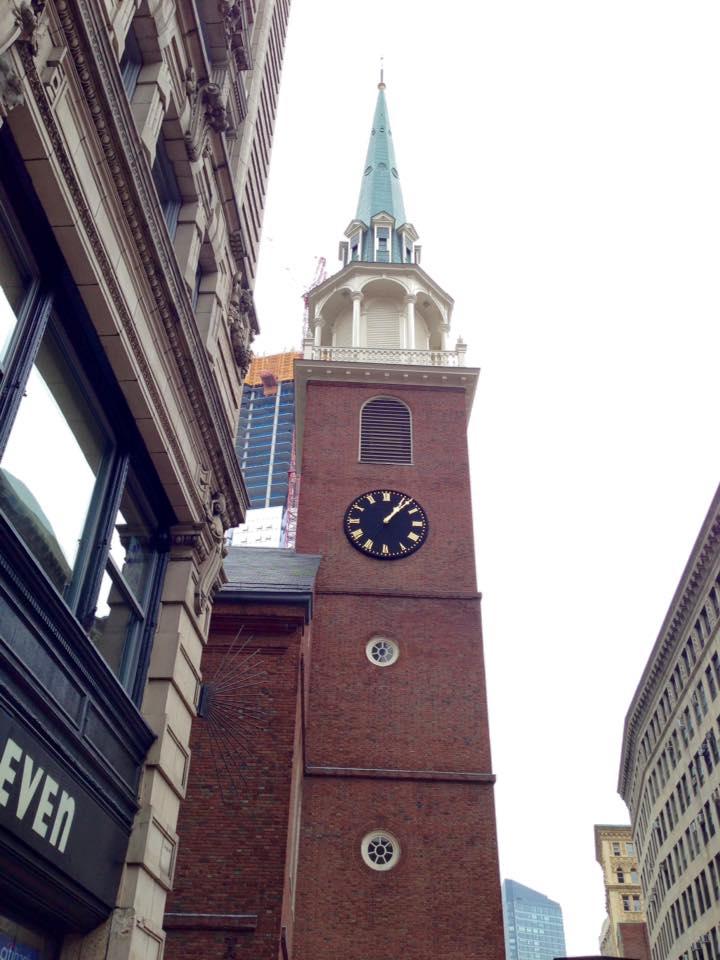 The Old State House which was also the site of the Boston Massacre. 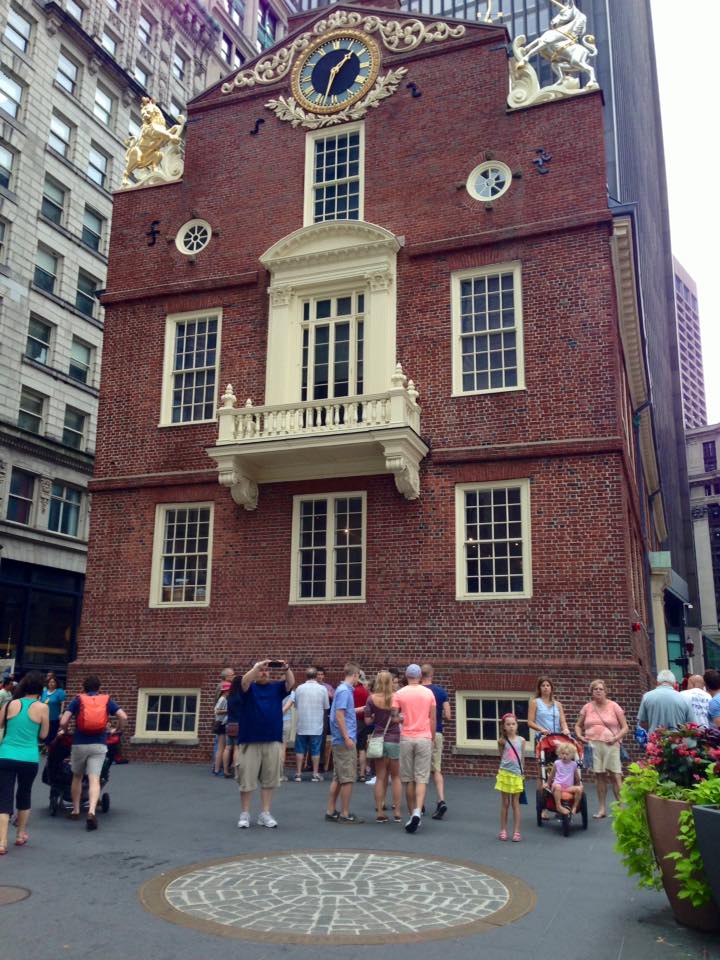 There were a lot more stops along the way, but those are just a few highlights to show you.

Along the trail we also walked through the Quincy Market which houses tons of restaurants and shops and was extremely crowded. 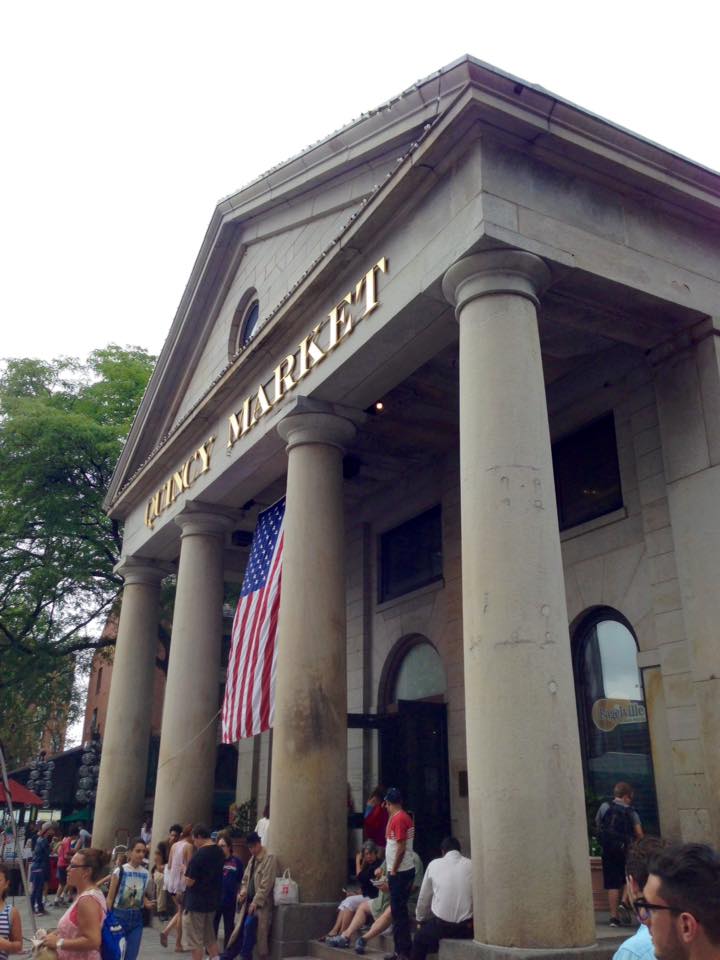 We walked out to the Boston Harbor as well which was so pretty! 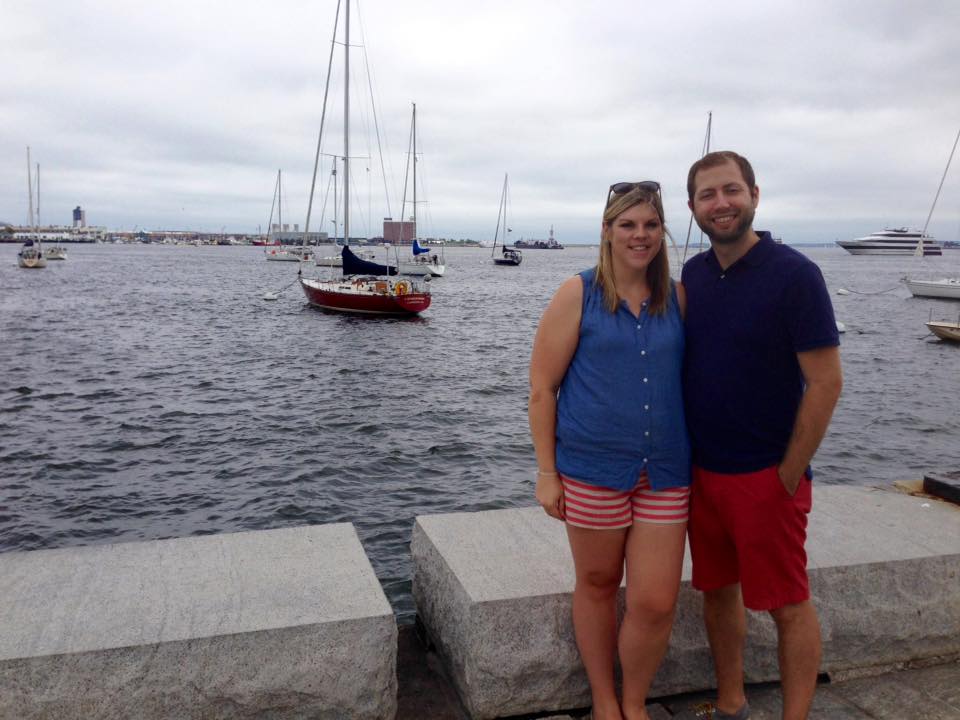 By this time we were all pretty hungry so we headed to the North End for a late lunch/early dinner.  The North End is basically the “Little Italy” of Boston and is lined with one Italian restaurant after the next. 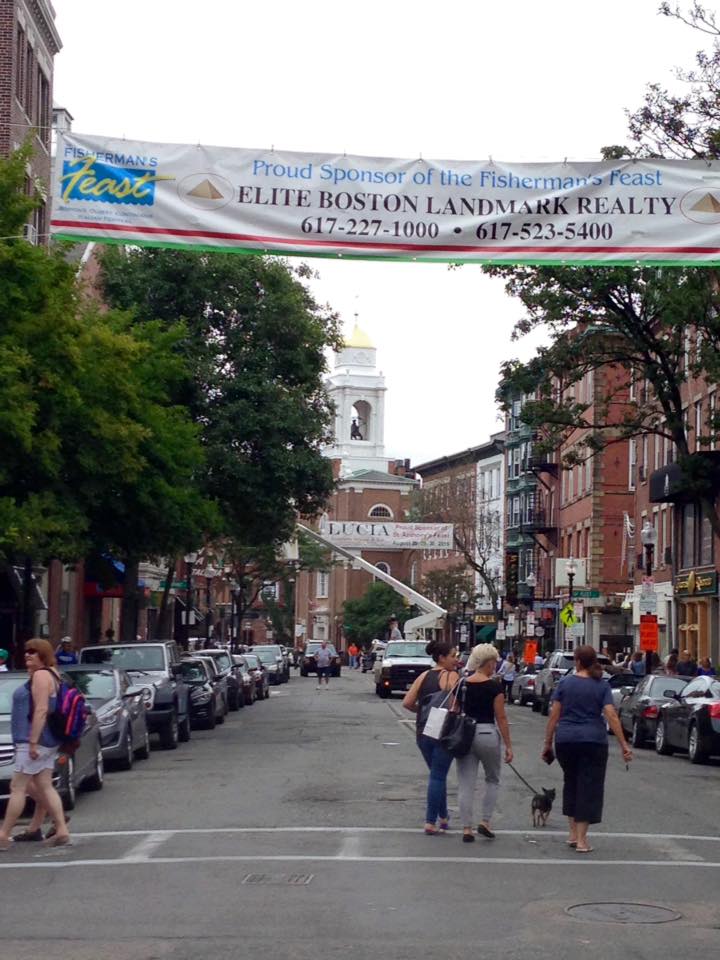 We ended up eating at Trattoria Il Panino which was a great choice.  We all loved our food!  It was definitely some of the best Italian I’ve eaten.  I ordered the gnocchi which was delicious! 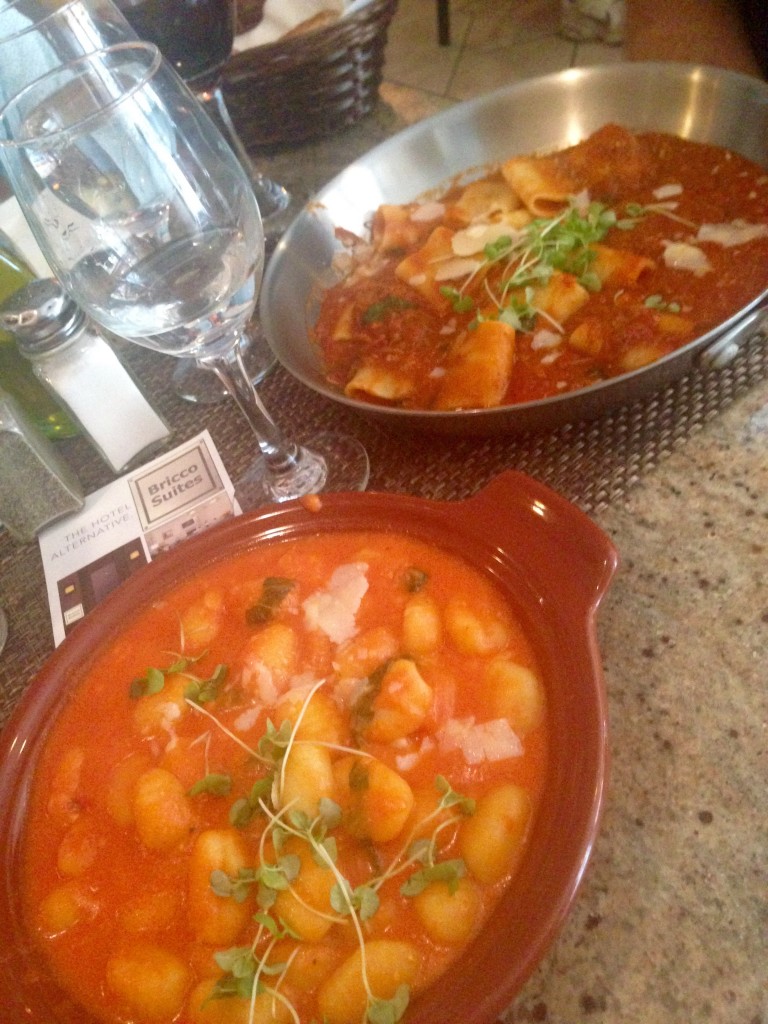 Kevin’s boss told him that we had to stop in Mike’s Pastry for a cannoli and judging by the lines of people at Mike’s, I would say it is pretty much a must stop while in Boston.  The cannolis were HUGE so we shared a chocolate dipped one which was phenomenal!

Brooke and Jason told us that their favorite place is actually Modern Pastry which is across the street from Mike’s but they wanted us to experience Mike’s since that is the place everyone knows.

After we walked off some of our food, we got back on the “T” and headed to Fenway Park! 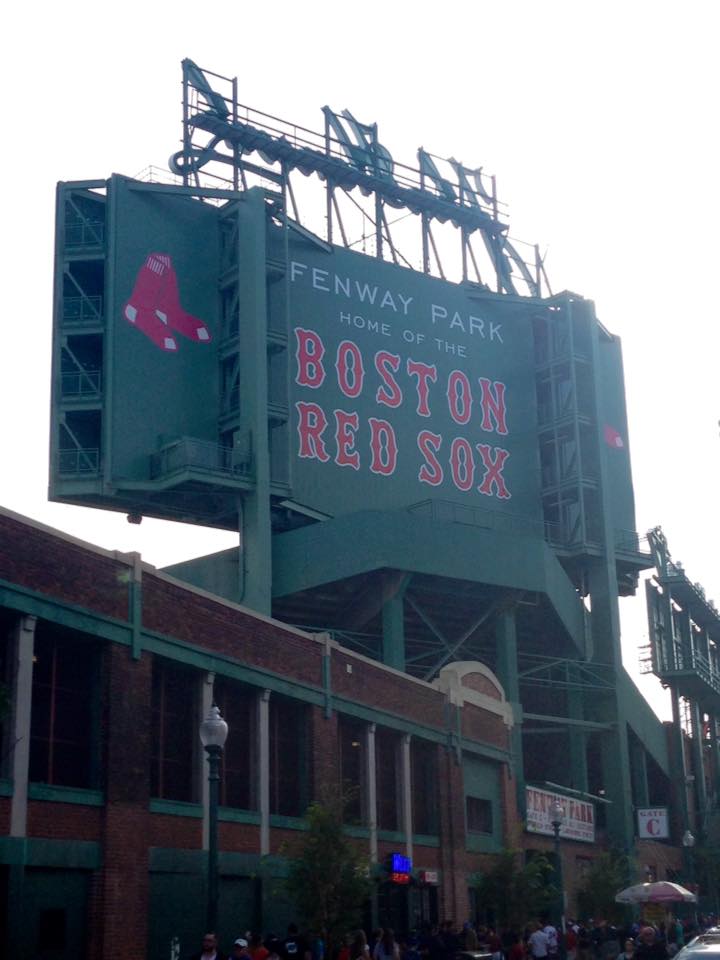 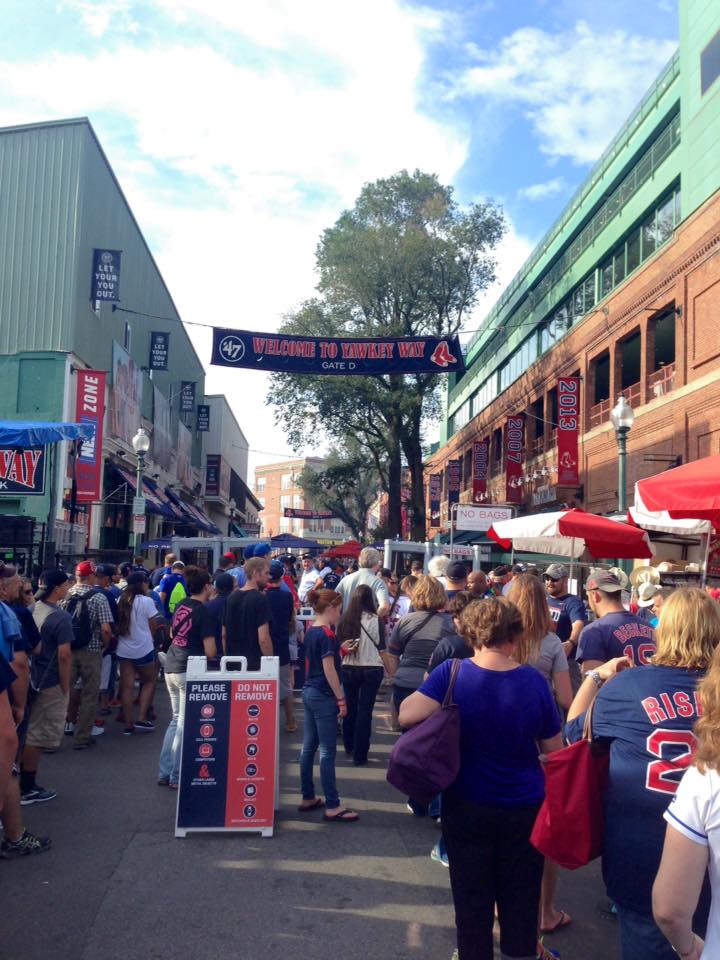 The Red Sox were in town so we caught a game that night and had a great time!  The design of the inside of the stadium and the concourse area reminded me so much of Wrigley Field which I guess makes sense since they are the two oldest stadiums remaining. 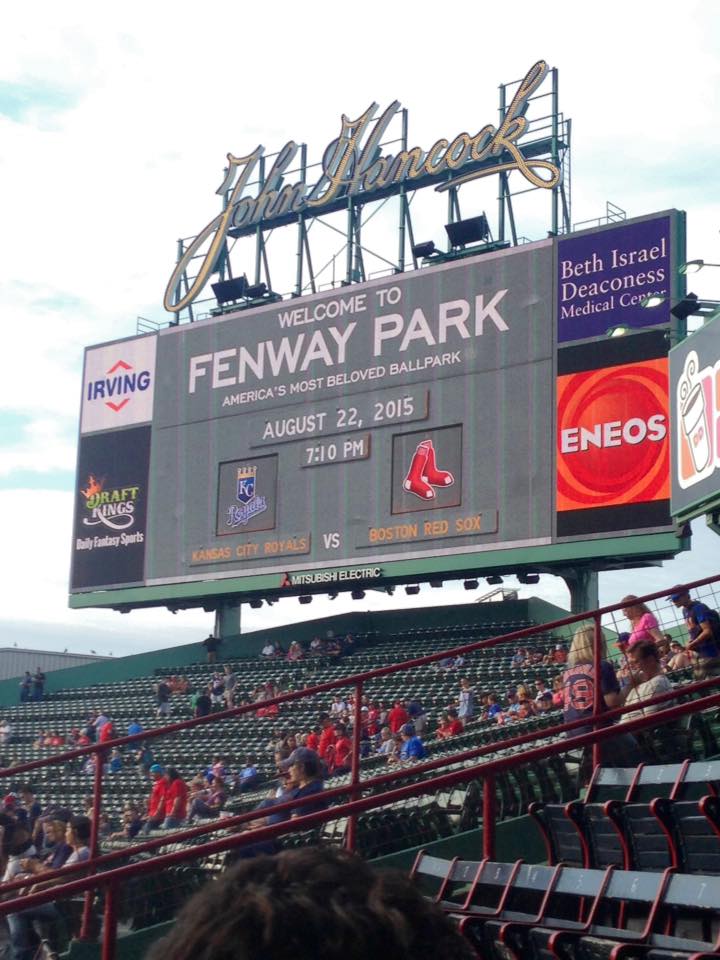 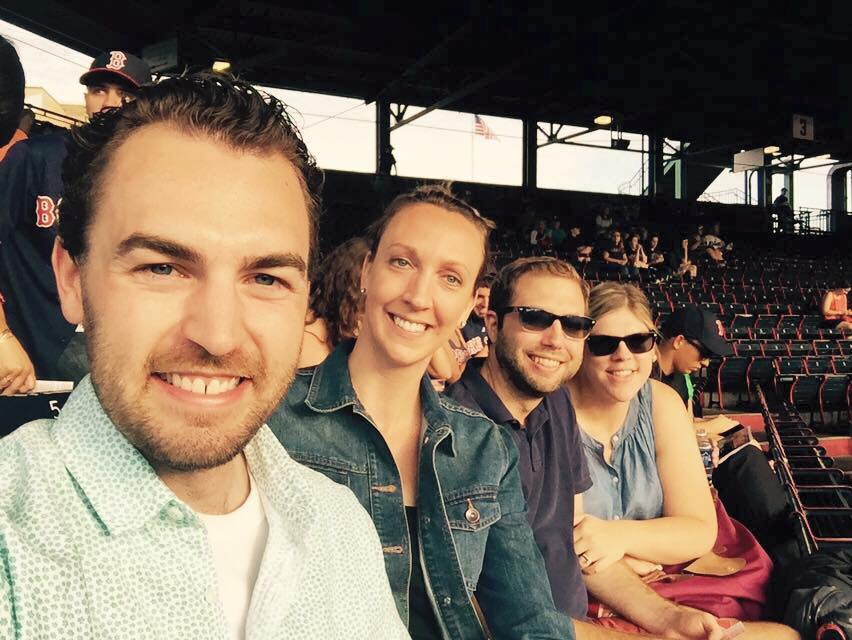 SUNDAY | We didn’t have much time on Sunday before we needed to be at the airport so we crossed one last thing of our list and visited Harvard’s campus in Cambridge.  I love touring college campuses and this one was no different.  Again, I would love to go back and spend more time here. 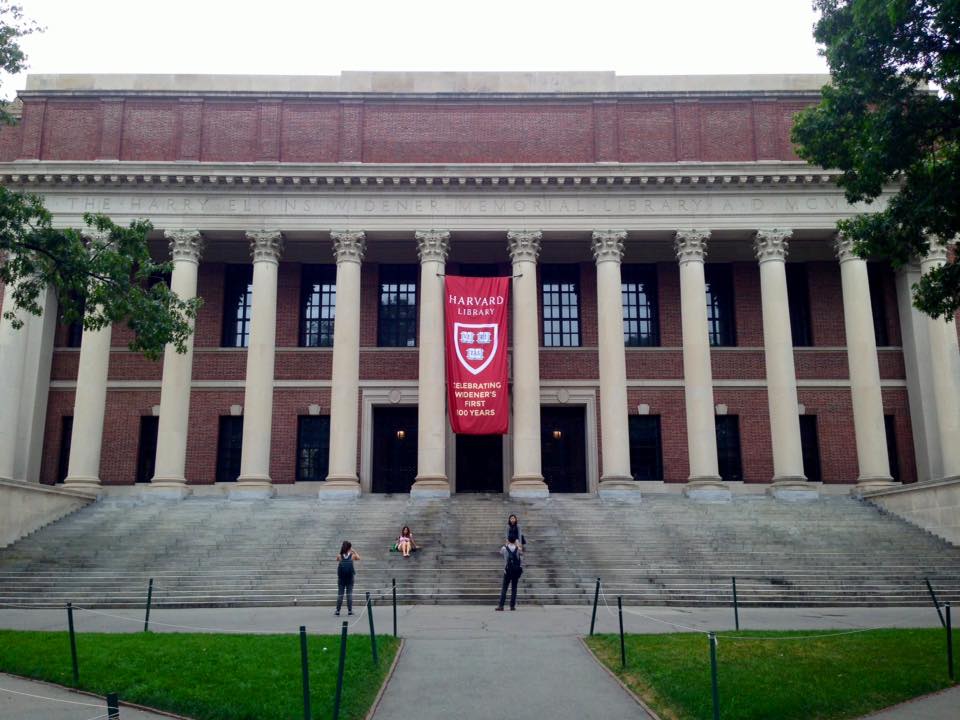 We ate lunch at Legal Sea Foods on campus before heading back to the airport.  I needed to get my seafood fix in at least once so I ordered a delicious lobster roll which was the perfect ending to a great trip! 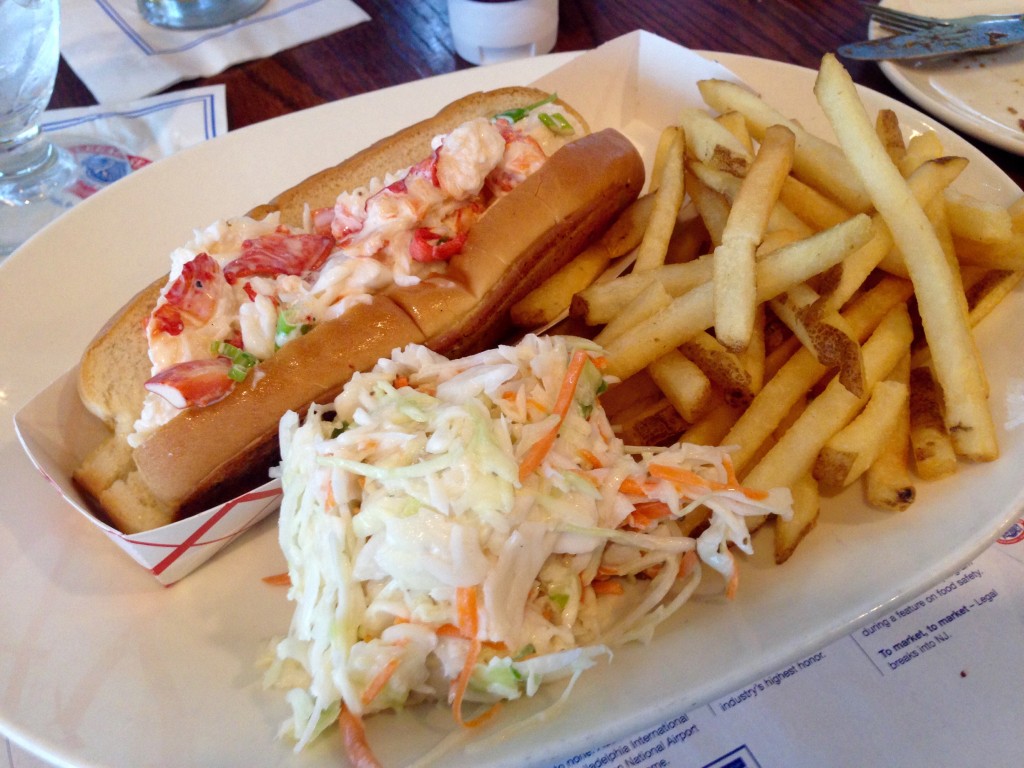 I really enjoyed our visit to Boston and definitely would love to go back.  I loved seeing all of the history of our country!  It’s hard to believe how much older everything is there compared to here in the Midwest.  Thanks to Brooke and Jason for hosting us! 🙂