Siena Tavern is the brainchild of Top Chef Season 5 contestant Fabio Viviani and is part of Dienamic Hospitality Group which are the guys behind Public House and Bull and Bear – two other Chicago favorites.  Siena Tavern quickly made a name for itself when it opened in early 2013 in the River North neighborhood and with my love for Italian food, I knew I had to go. 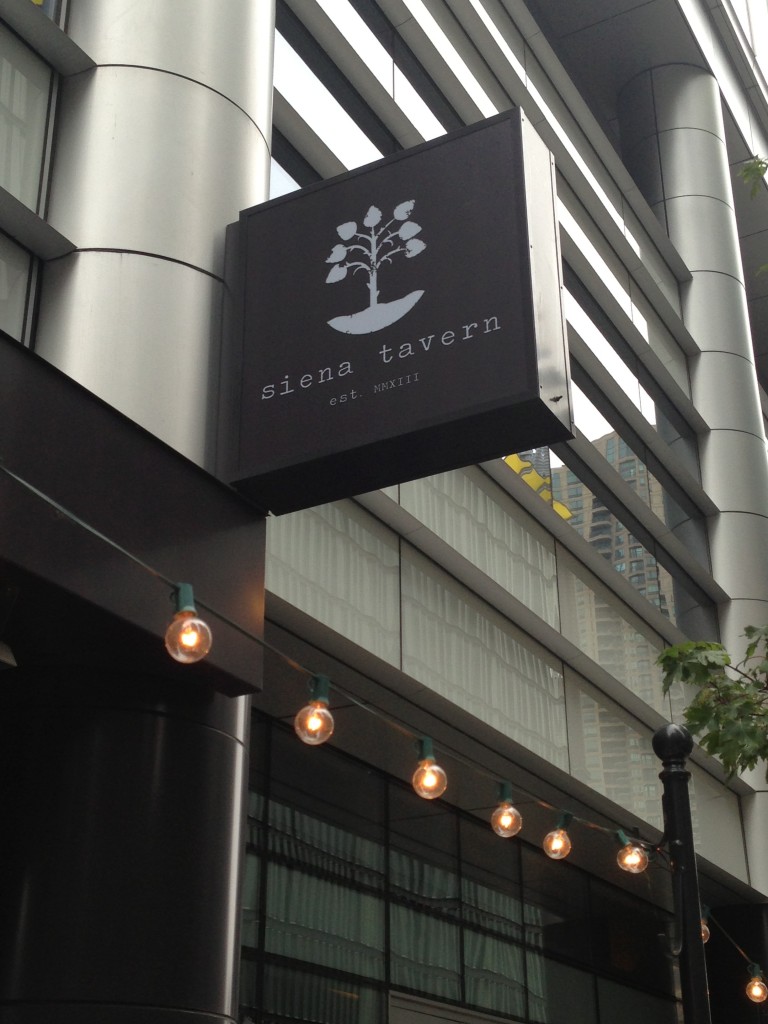 We went for the first time last August to celebrate our 3 year wedding anniversary.  The design of the menu is meant for sharing and our waiter was great at walking us through the menu and making suggestions.  The first thing we knew we had to have was the meatball.  Siena’s meatball is literally the size of a softball and is made with kobe beef which is combined with breadcrumbs that are soaked in milk overnight which adds so much moisture to the meat.  It is served with tomato sauce and topped with ricotta cheese and is seriously ridiculous!  This meatball is so good it even has its own Twitter handle – @sienameatball.  My mouth is watering just thinking about it! 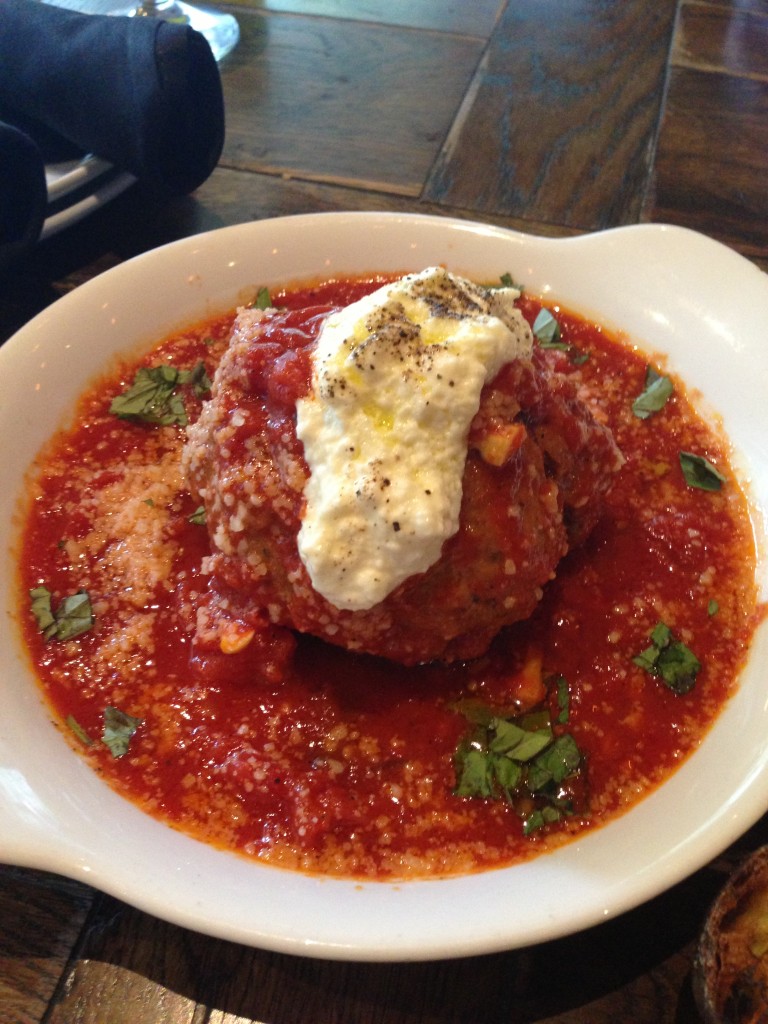 The restaurant also has its own mozzarella bar with cheeses made in house.  We are big fans of burrata so that was our natural choice.  The burrata was served with tomato jam, sea salt, and basil oil along with grilled bread.  The burrata itself was delicious with the sea salt and oil and the tomato jam was more sweet than savory. 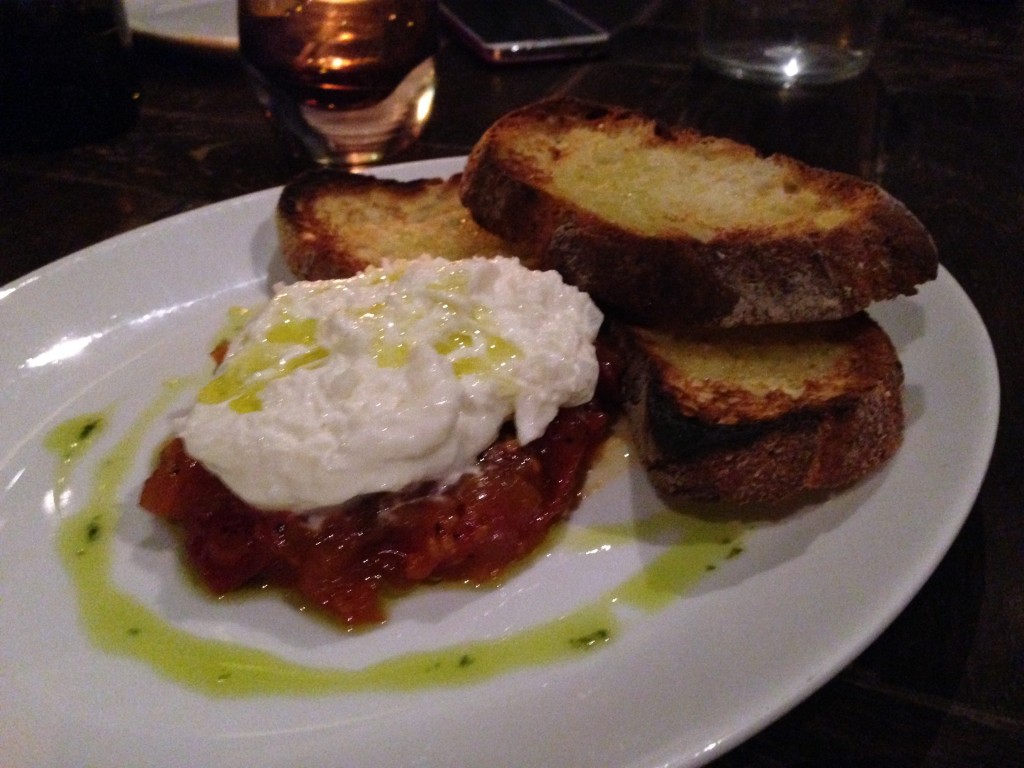 Since pizza is my favorite food, I knew I wanted to try some of their pizza.  Our waiter told us they actually flew their chefs to Italy to learn how to make the pizza and I’d say it definitely paid off.  We ordered the fig, prosciutto,  and arugula pizza which was a full-sized pizza.  The crust was perfectly thin and chewy which I love and the toppings were fresh and flavorful.  We each only ate one piece knowing we still had more food coming so we had pizza the next night for dinner too – win!

For our main entree we ordered the lamb chops, at the recommendation of our waiter.  The lamb was cooked perfectly rare and was served with fava beans and fingerling potatoes.  It’s hard to say which thing we ordered was best because everything was so incredible, but this lamb is definitely a top contender.

Even though we were absolutely stuffed after eating all of the food, we just had to try their gelato!  Our waiter told us that the restaurant flies in a woman from Italy each month to make homemade gelato.  We tried a scoop of the salted caramel and it was seriously the creamiest, most delicious gelato I have ever eaten.  I have never been to Italy, but if this is what the gelato tastes like there, I can see why people who vacation there eat it everyday! 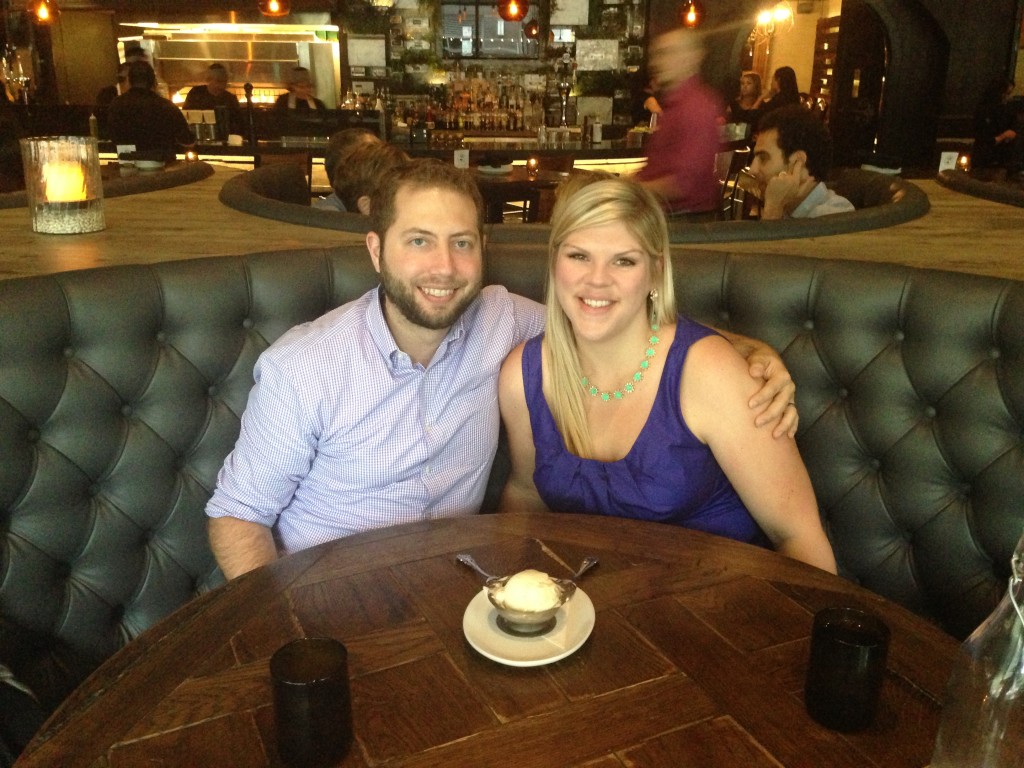 Since it was just the two of us, we didn’t get to try the full menu on our first visit.  Siena is also known for their housemade pastas which we knew we needed to return for.  We ended up going back with a larger group of friends for New Years and got to try a lot more stuff.  We tried the truffle cream gnocchi which is probably the best pasta dish I have ever eaten and  is not surprisingly their most popular pasta dish.  We also had orecchiete with prosciutto sausage and chili flakes which was also delicious!  Unfortunately, I forgot to take pictures so you’ll just have to take my word for it or go try it yourself!

Siena Tavern is for sure one of my favorite restaurants in Chicago and I have recommended it to several out of town guests.  Siena has had so much success in Chicago that Fabio is working on a Siena Tavern Miami which is scheduled to open this summer.