Good afternoon blog friends!  How was your weekend?  Mine was one of the best weekends I have had in a long time!  This weekend I traveled to Louisville to host a bridal shower for almost sister-in-law, Faith.  I can’t wait to share all of the details with you today. 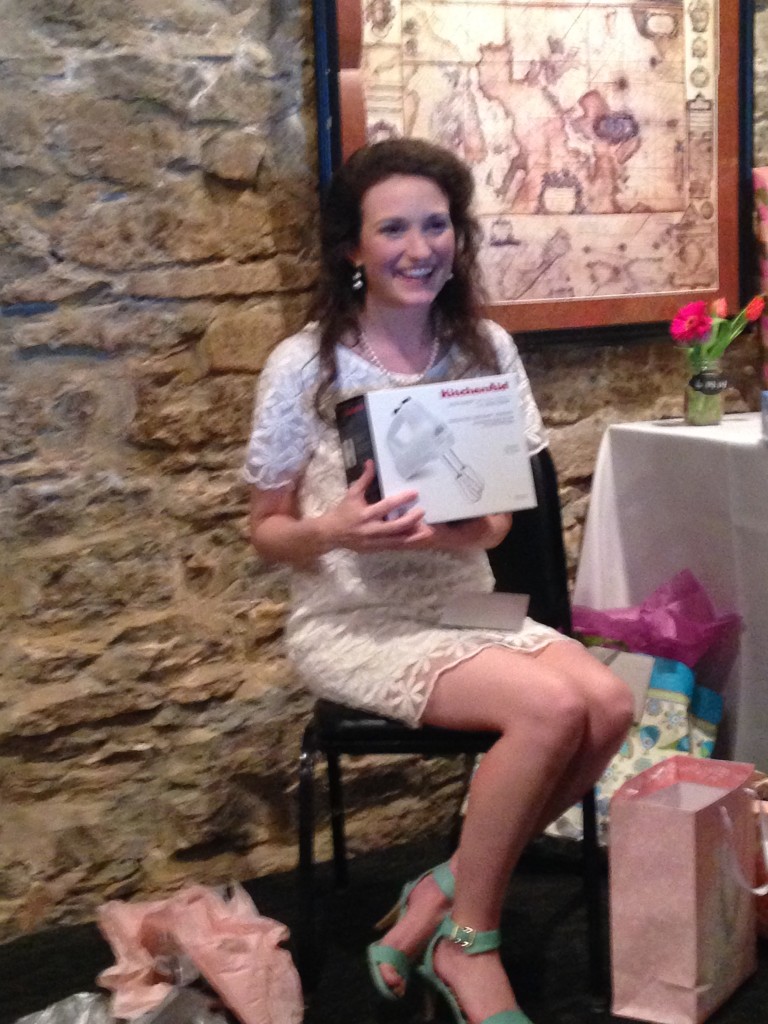 How cute is our bride-to-be?

Friday afternoon my sister and I flew from Chicago to Louisville.  Since the shower festivities weren’t until the next day, we took advantage of the nice weather and explored the downtown area.  We walked around and checked out different areas including 4th Street Live which is a strip of different bars/restaurants that becomes very lively at night.  We even discovered a bit of Chicago while there.  They just opened a Goose Island Beer Bridge three weeks ago! Pretty cool! 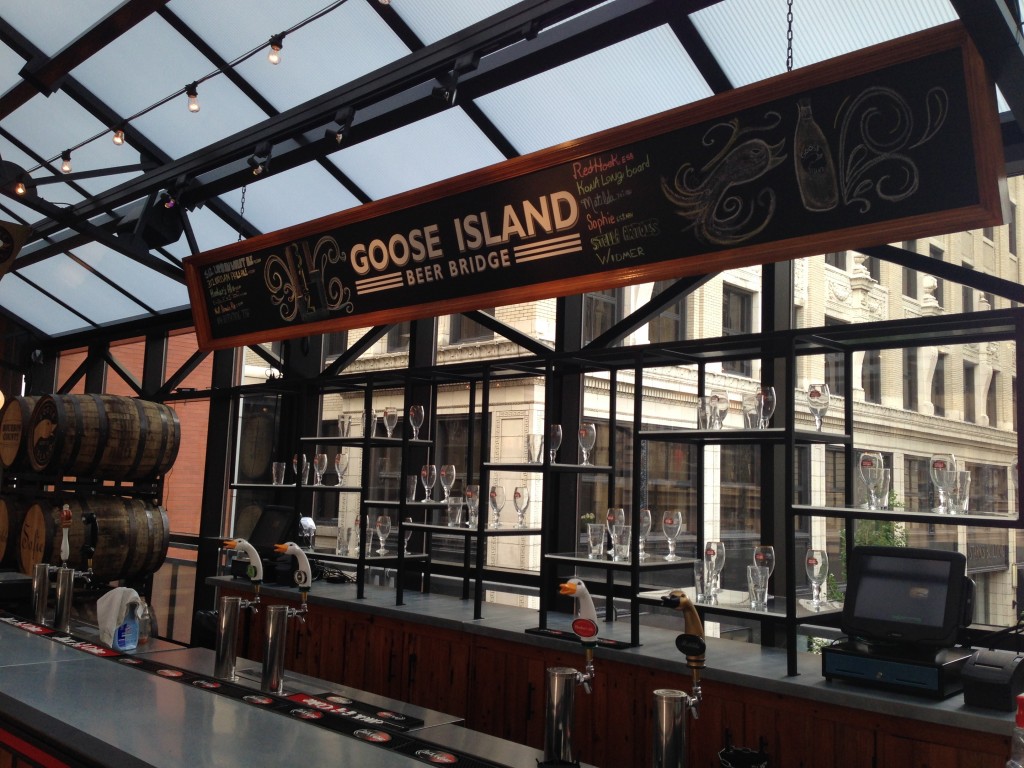 After walking around for a while, we both started to get hungry so we hit up Manny and Merle for happy hour.  We sipped on $3 margs (can’t beat that) while eating chips and queso and tacos!  So good! 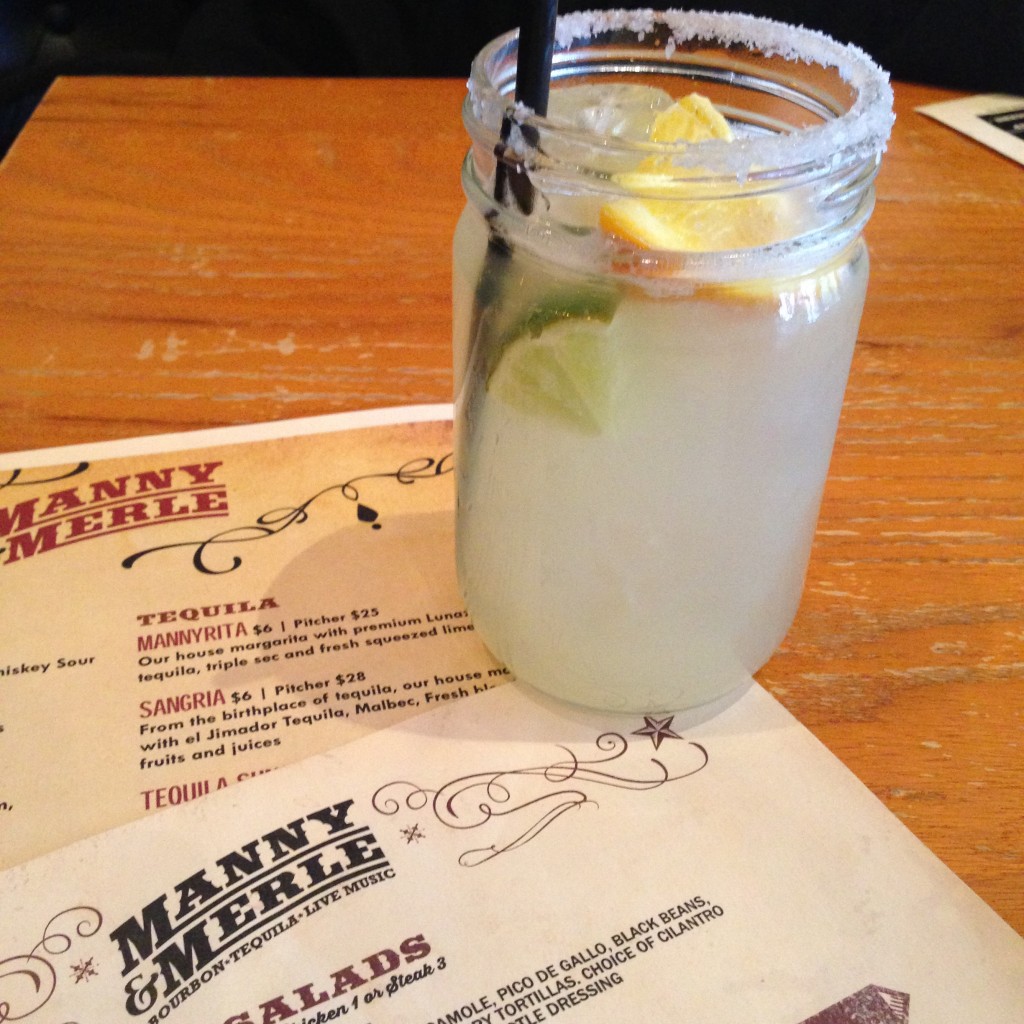 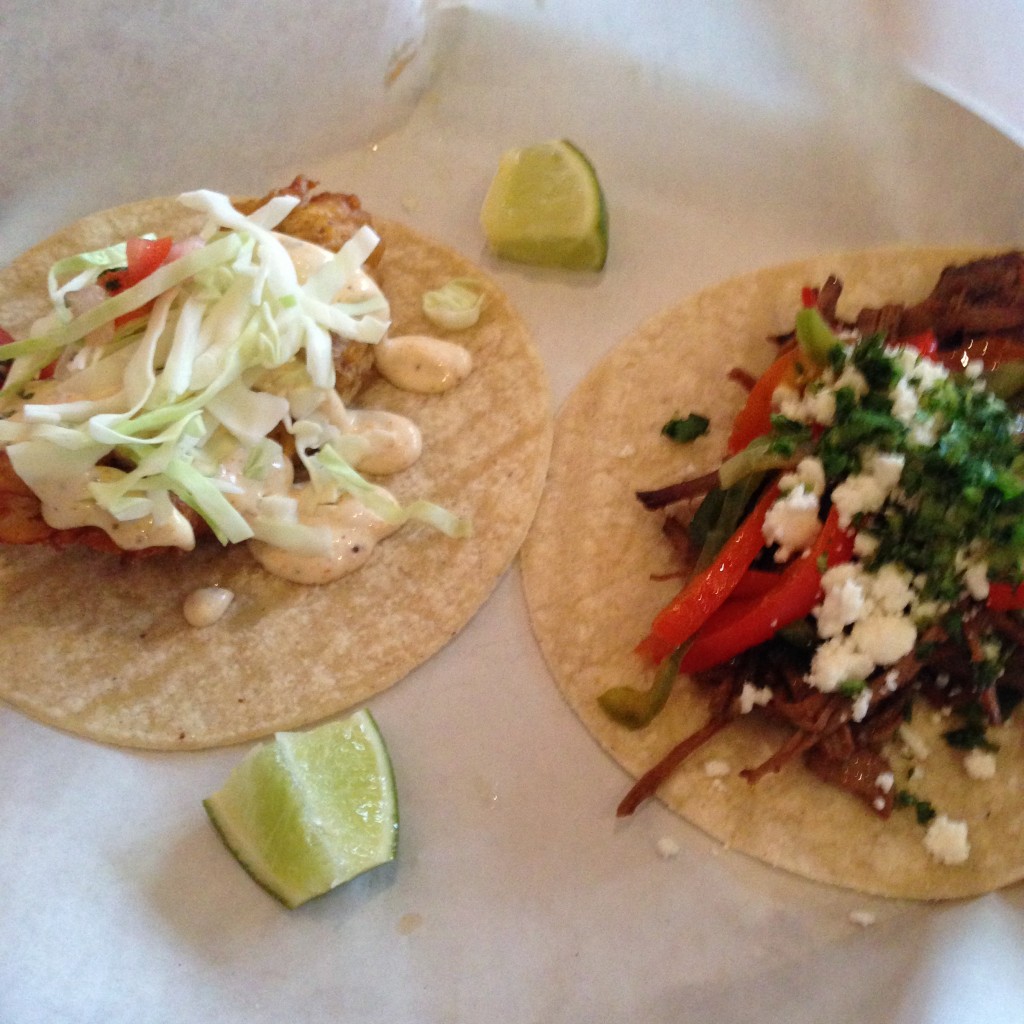 After dinner we ended up just going back to our hotel room and calling it a night.  We knew we wanted to save our energy for our full day on Saturday.

Saturday morning we met up with our mom to run some last minute errands for the shower.  We picked up the flowers and desserts and then headed over to my grandparents’ house to visit for a little while.  I got to meet my newest cousin, Colin, for the first time.  Such a little sweetie!

Don’t mind the burp cloth on his head 🙂

After visiting for a while, we left the boys behind and headed over to the shower.  The shower took place at Captain’s Quarters Riverside Grille which is located right on the Ohio River.  Planning an out of town shower is not always an easy task.  Since I was not familiar with too many venues in Louisville, I relied a lot on Yelp reviews when searching for places.  I eventually settled on Captain’s Quarters and could not have had a more pleasant experience!  The event coordinator was super helpful and friendly from the beginning and the service we received at the shower was fantastic!  The food was great and the water views were amazing!  If you are in the Louisville area and need a place to host a party, I would highly recommend Captain’s Quarters. 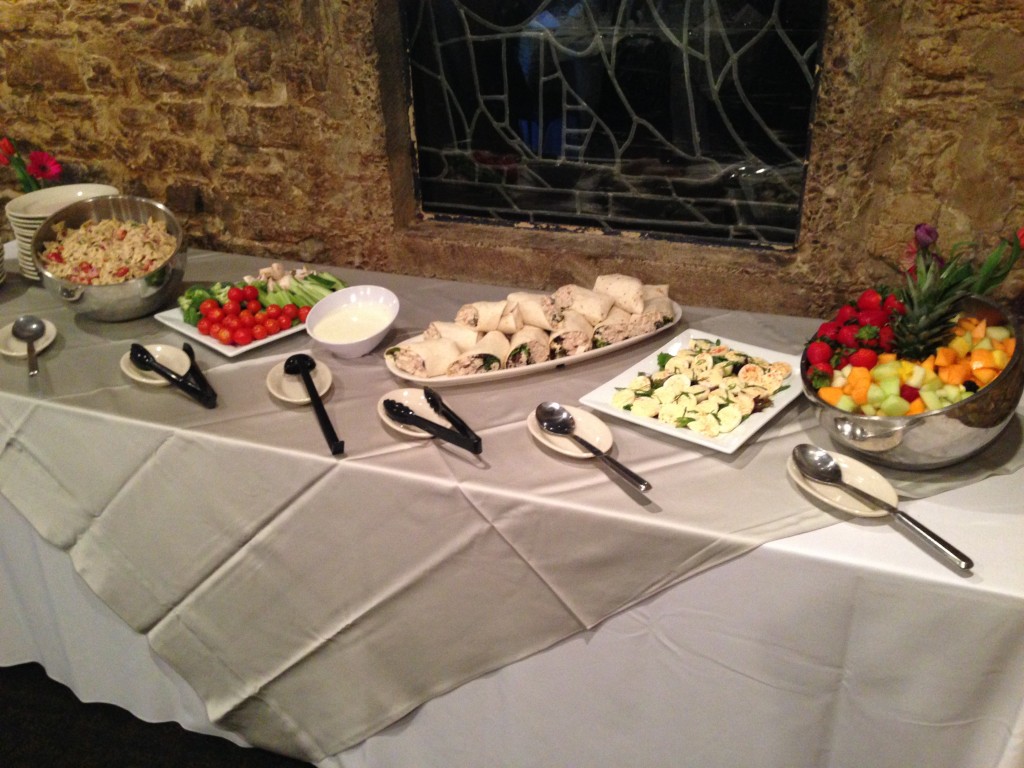 For flowers, we picked up different colored tulips and gerber daisies and made our own simple arrangements.  I bought small mason jars for the vases and found cute chalkboard tags which we wrote their monogram and wedding dates on and wrapped around the vases. 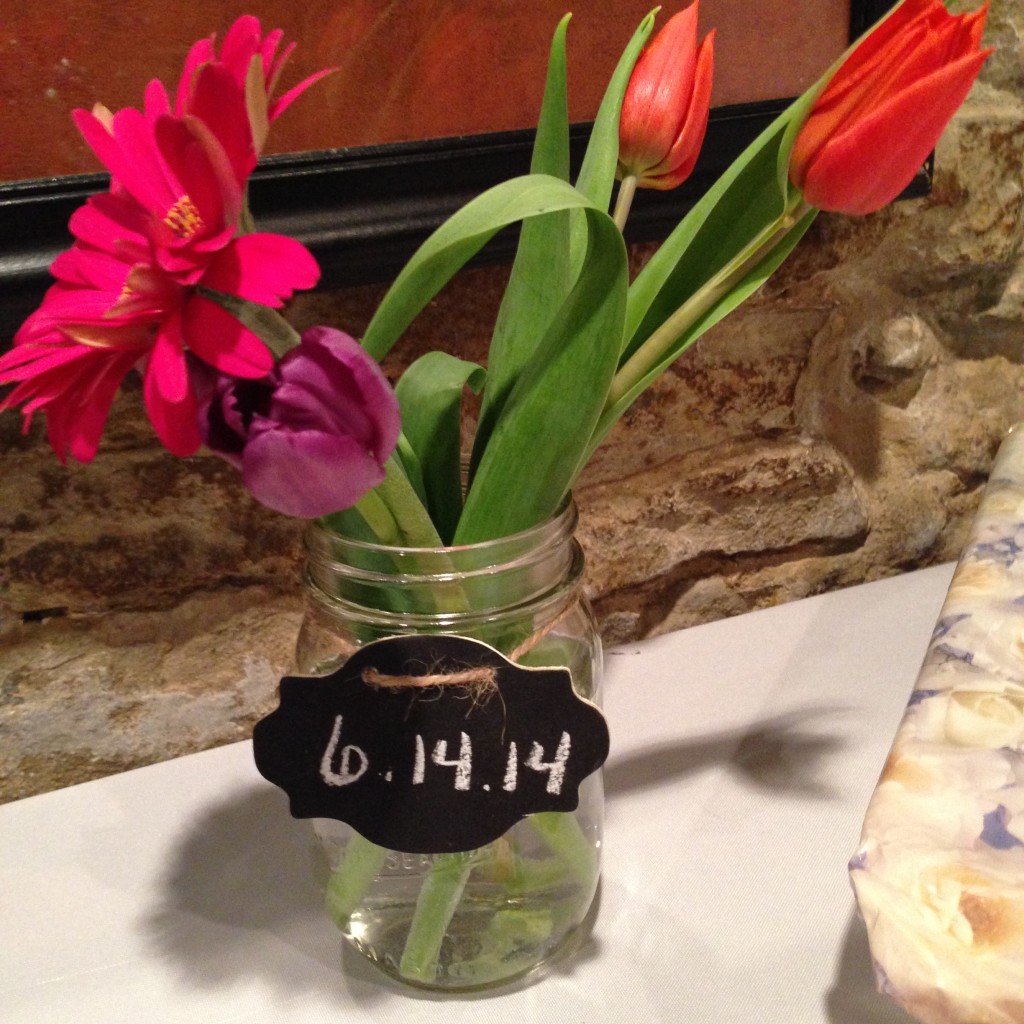 I also printed a couple of their engagement pictures and put in frames to use as the table centerpieces with the flowers. 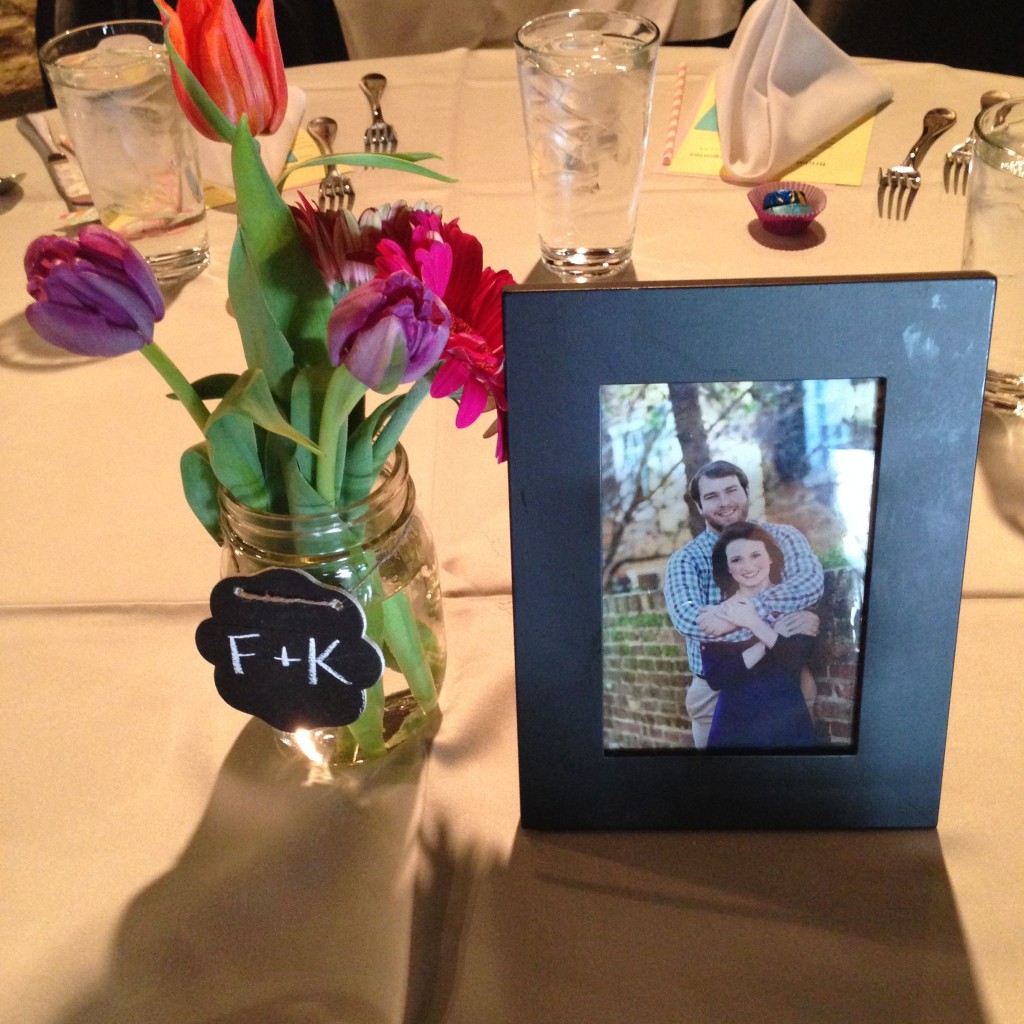 Favors were kept simple with Dove chocolates in mini cupcake wrappers set at each person’s seat. 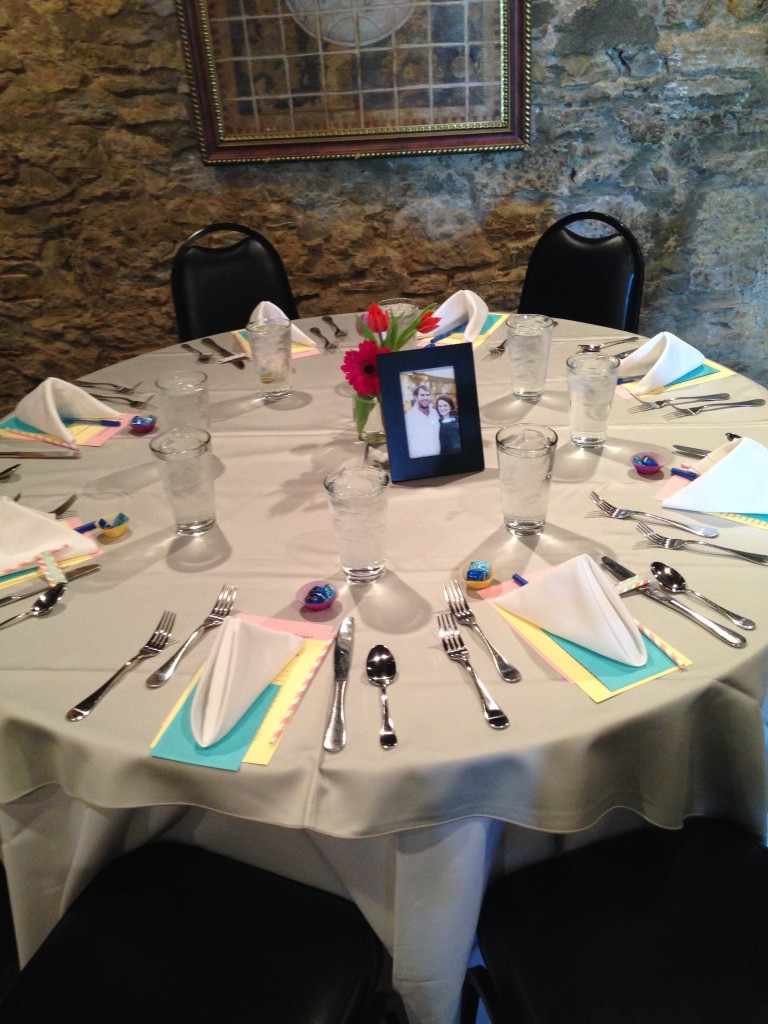 For the games, we played Bridal Shower Scattergories and the What’s In Your Purse game which were both a hit! Scattergories is a favorite in our family and we had some very serious players! 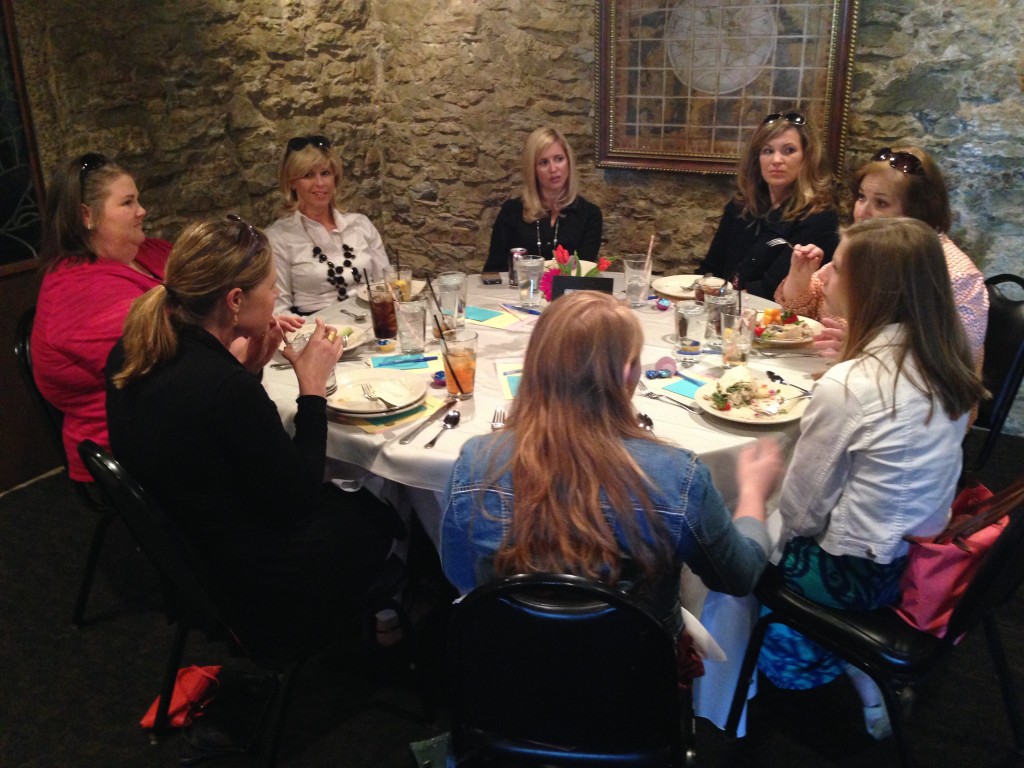 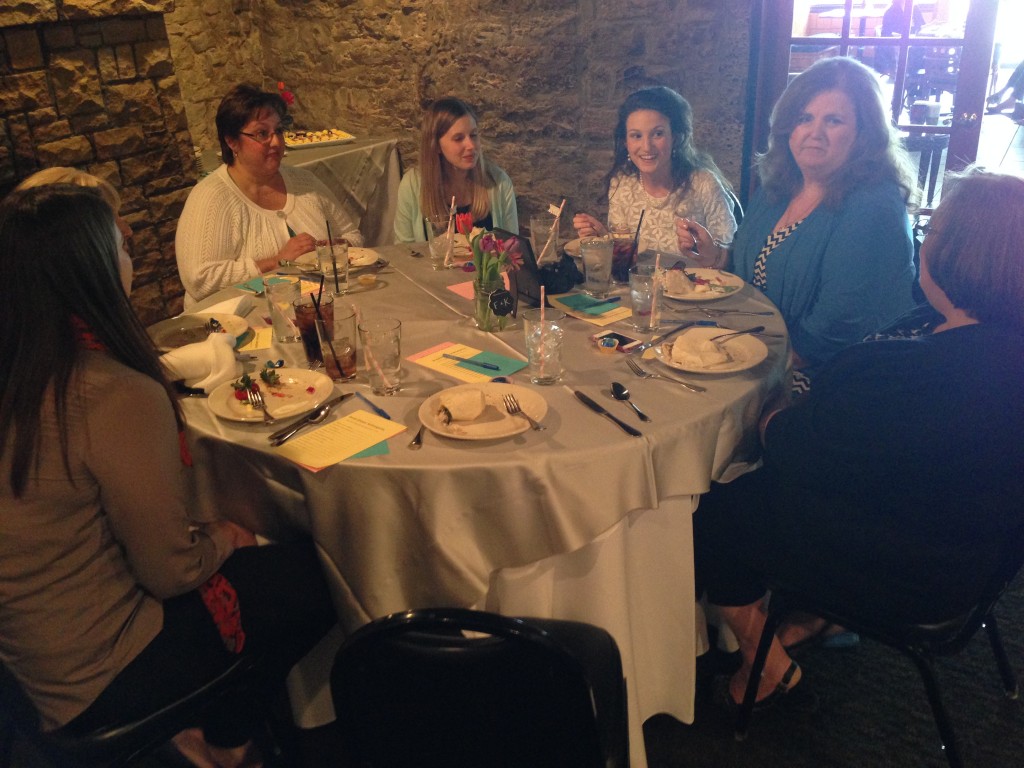 For dessert, we went to Sullivan University’s Bakery and picked up an assortment of mini cheesecakes.  We also bought mini cupcakes and cookies.  I ordered some cupcake toppers from the Etsy shop Party4aParty that had Faith and Kyle’s monogram and wedding date on them.  By purchasing from Party4aParty, the seller uses part of her proceeds to donate custom decorations to less fortunate children who do not have the privilege of celebrating their special days.  How awesome is that? 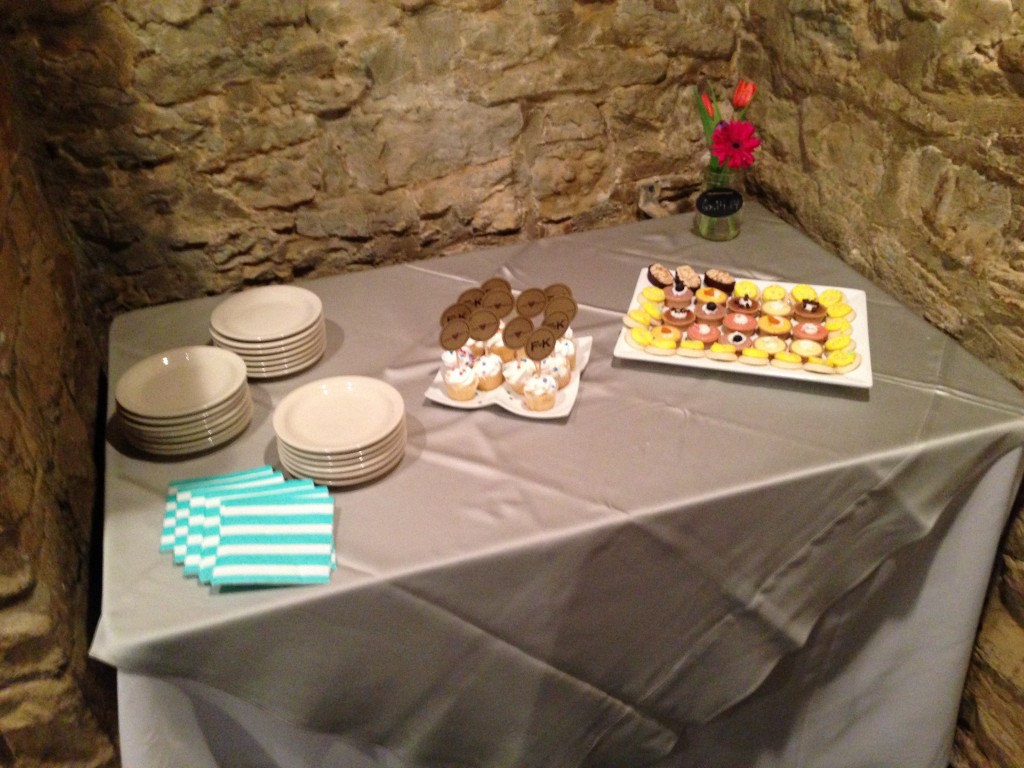 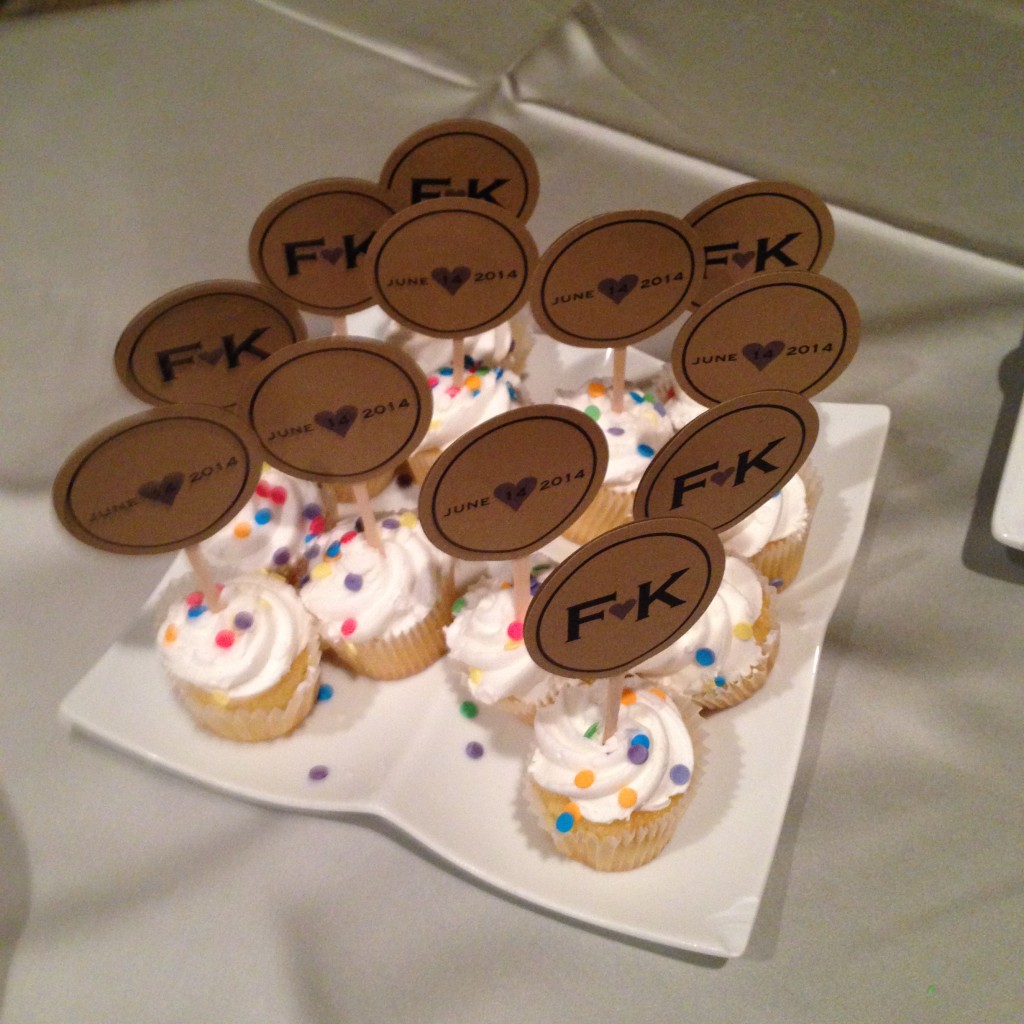 After food and games, Faith opened all of her gifts which included the secret project I mentioned I was working on a few weeks ago.  I had everyone at the shower (all of our family) contribute different family recipes they love and then put together a cookbook for Faith.  My friend, Kelly, told me about an awesome website she had used before called Tastebook which is what I used to design the cookbook.  Have any of you heard of this site before?  You input all of your recipes, pick a title and cover for you cookbook, and they put it together for you!  It turned out so nice and looked so professional.  I think she really loved it! 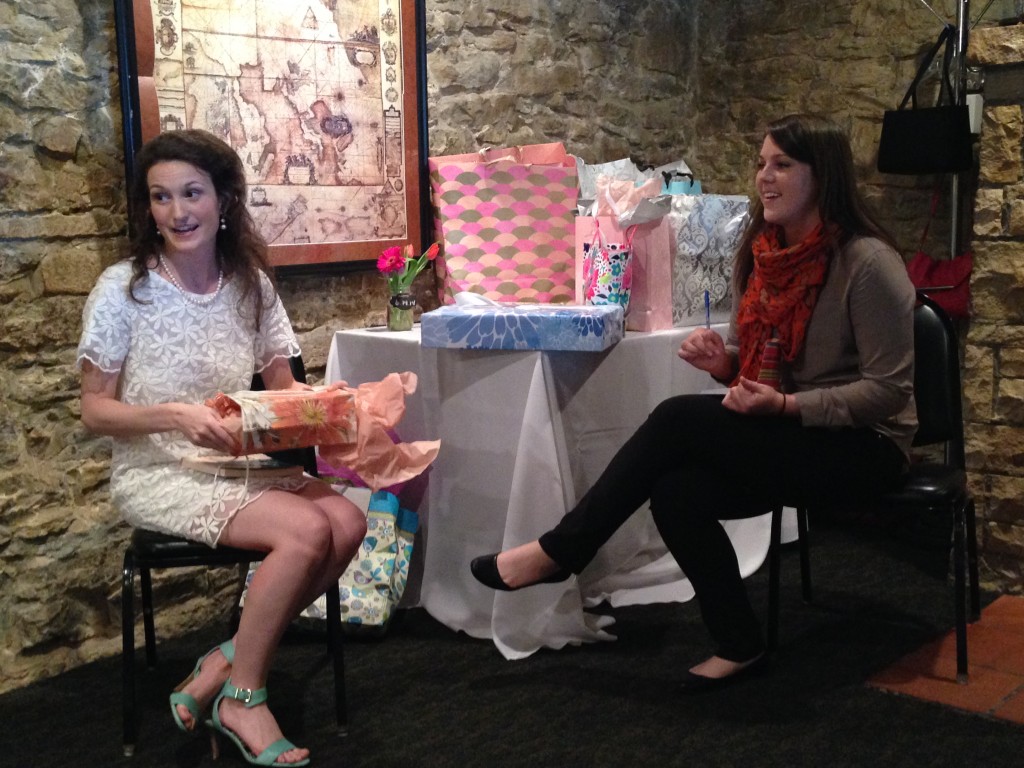 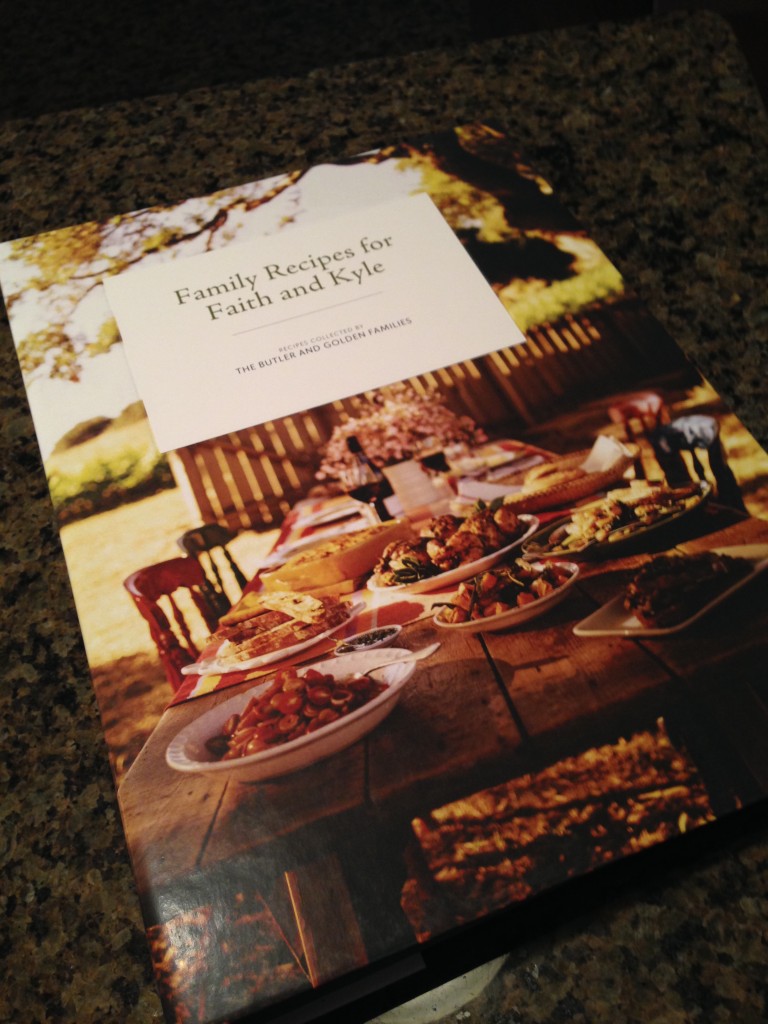 After the shower, we took pictures outside by the water and then headed on to our next event! 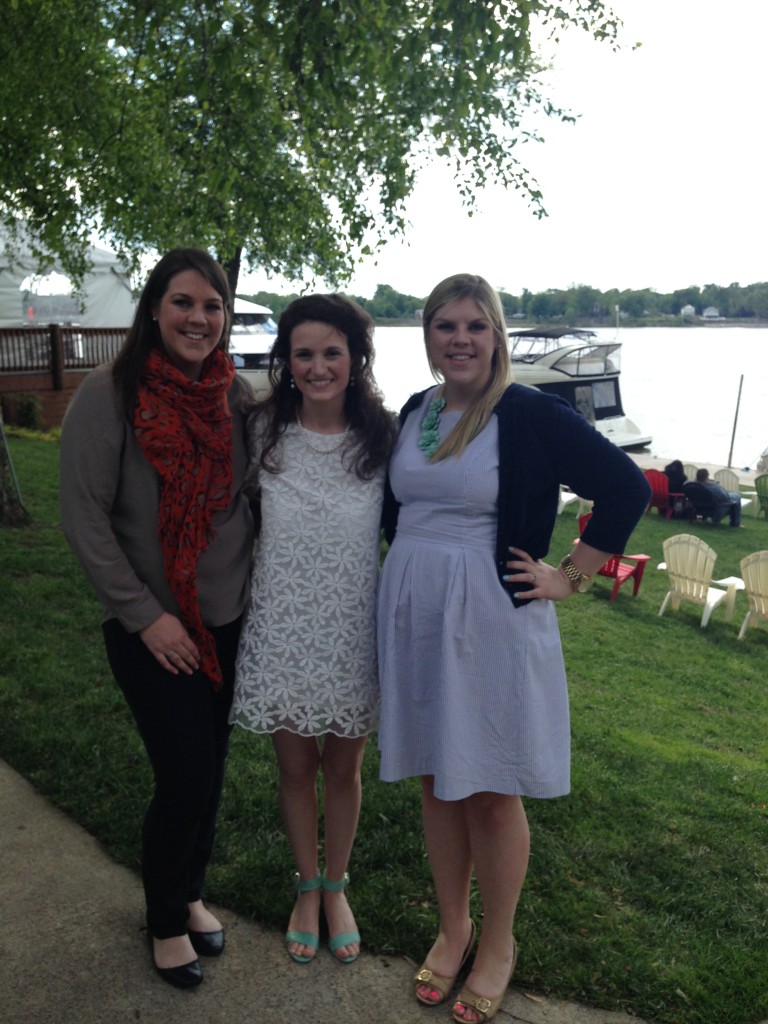 My sister, Faith, and me

After the shower, we met up with all of the boys and kids for dinner at my cousin’s house.  Faith’s parents were able to drive up from Alabama and join all of our family for the festivities and it was so wonderful to meet them!  Everyone had a great time just catching up with each other and watching all of the kids play.  I don’t get to see my extended family nearly enough so it was a really fun time being all together.  I can’t wait to see everyone again in June for the actual wedding! 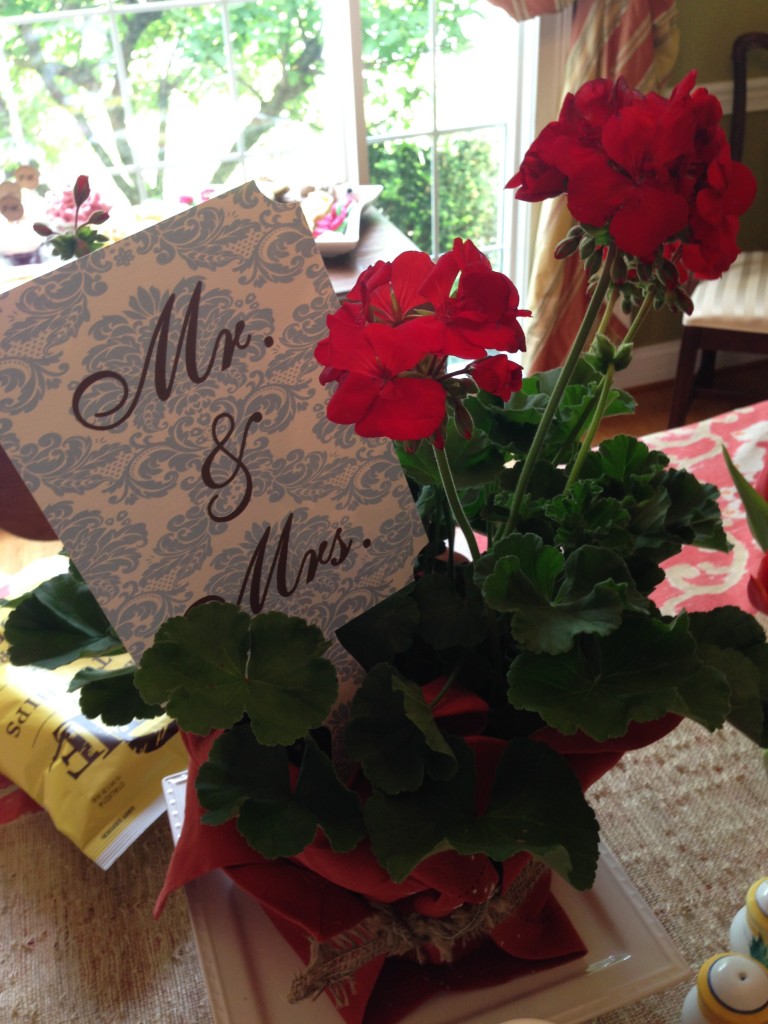 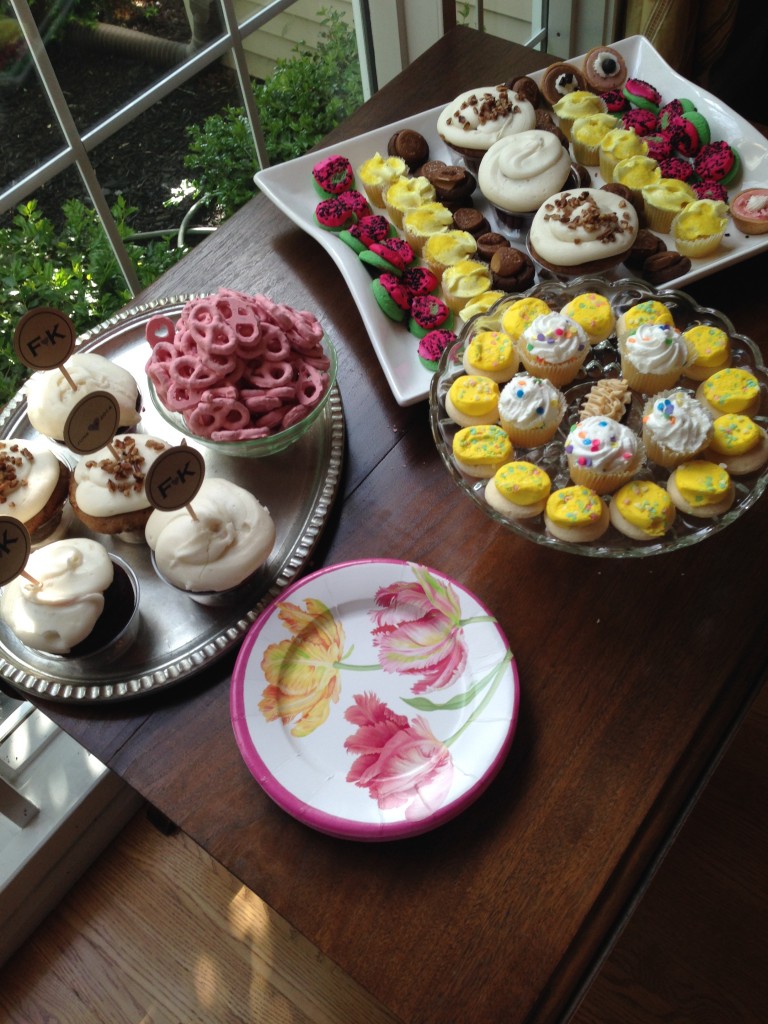 Sunday morning I was up bright and early for a 7:30 AM flight – yuck!  Because the flight is so short between the two cities and we gain an hour coming home, you end up landing at basically the same time you took off so it is kind of nice getting a full day at home.  Kevin picked me up from the airport and we headed to Panera for breakfast (this is becoming quite the weekend habit, ha)!  Kevin had one of our friends and his girlfriend in town visiting all weekend so we caught up with each other and rehashed our weekend activities.  After breakfast, I went home to shower/get ready for the day.  We had an open house that afternoon so had to be out of the house.  I was supposed to meet up with some girlfriends for brunch but those plans got cancelled so I ended up walking around a Old Town in Chicago for a while.  It was such a beautiful day yesterday! 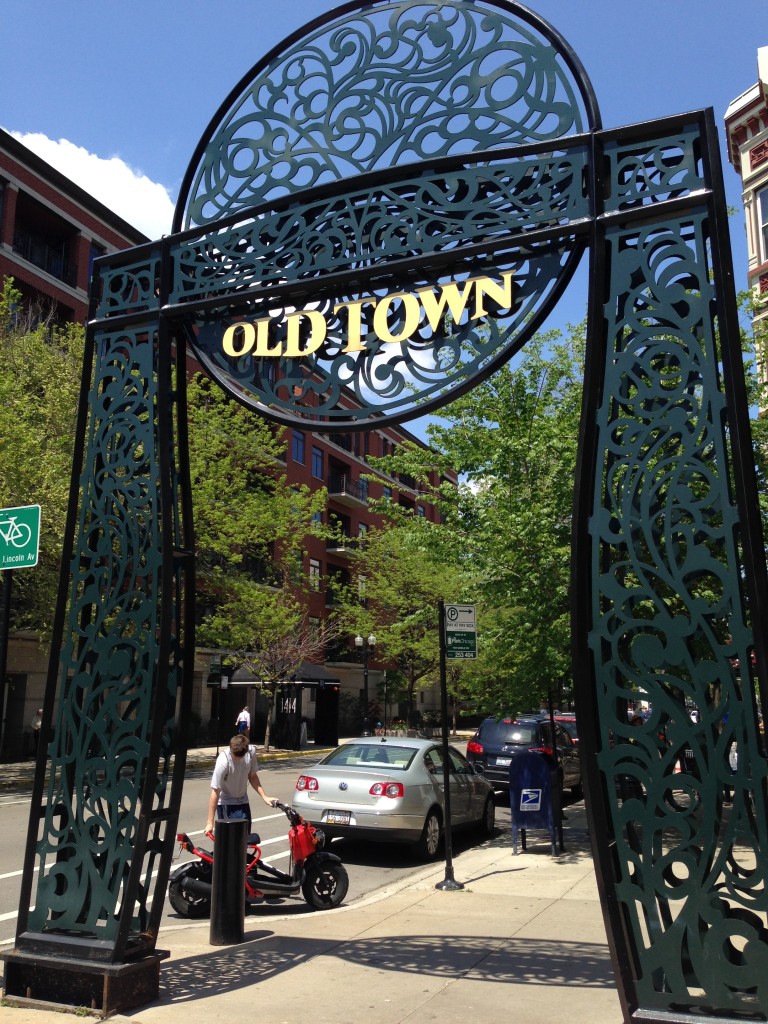 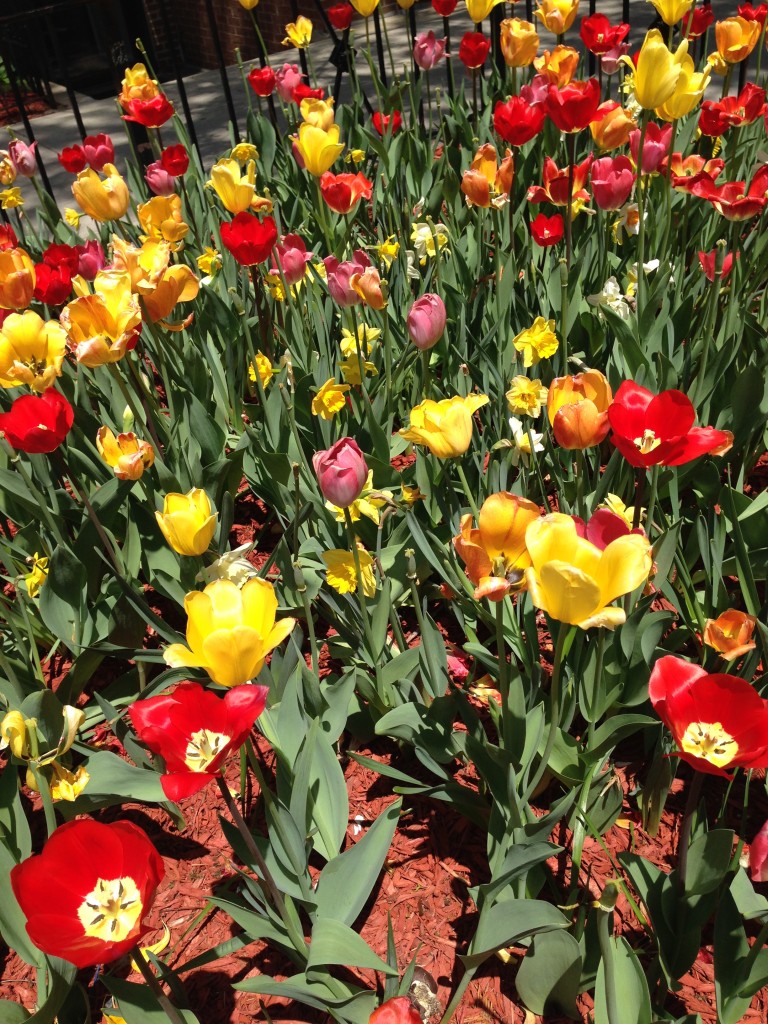 Since my brunch plans were cancelled, Kevin and I ended up having an impromptu picnic in a park by our house.  We picked up some sandwiches from Red Hen Bread and sat outside and enjoyed the sunshine! 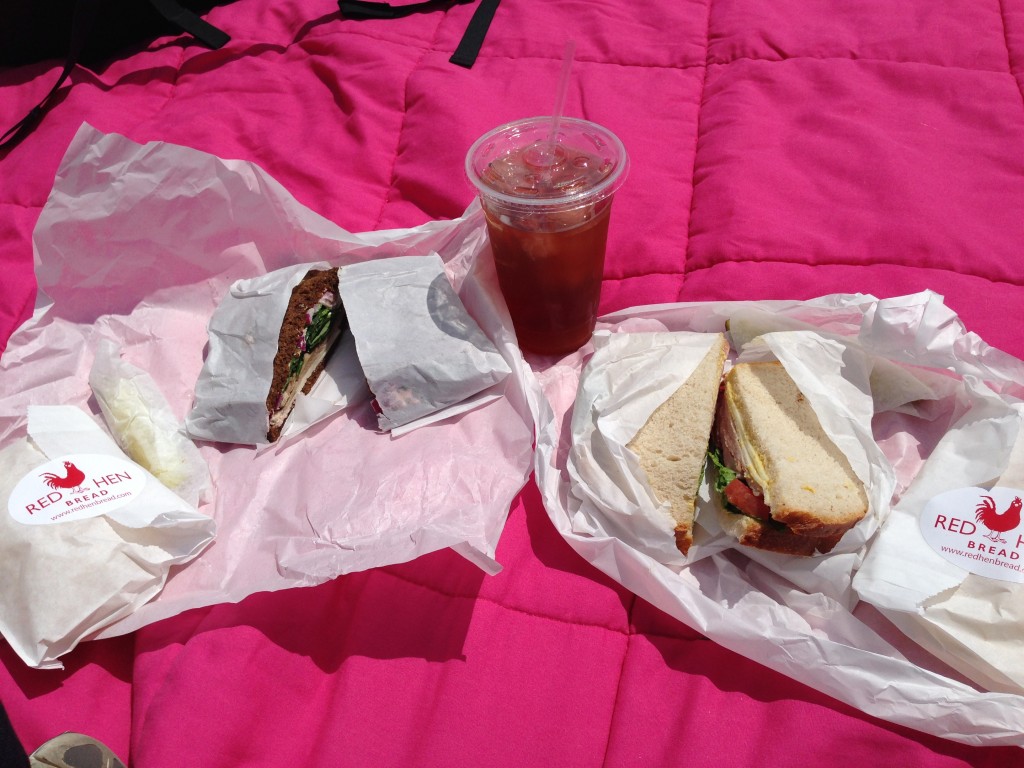 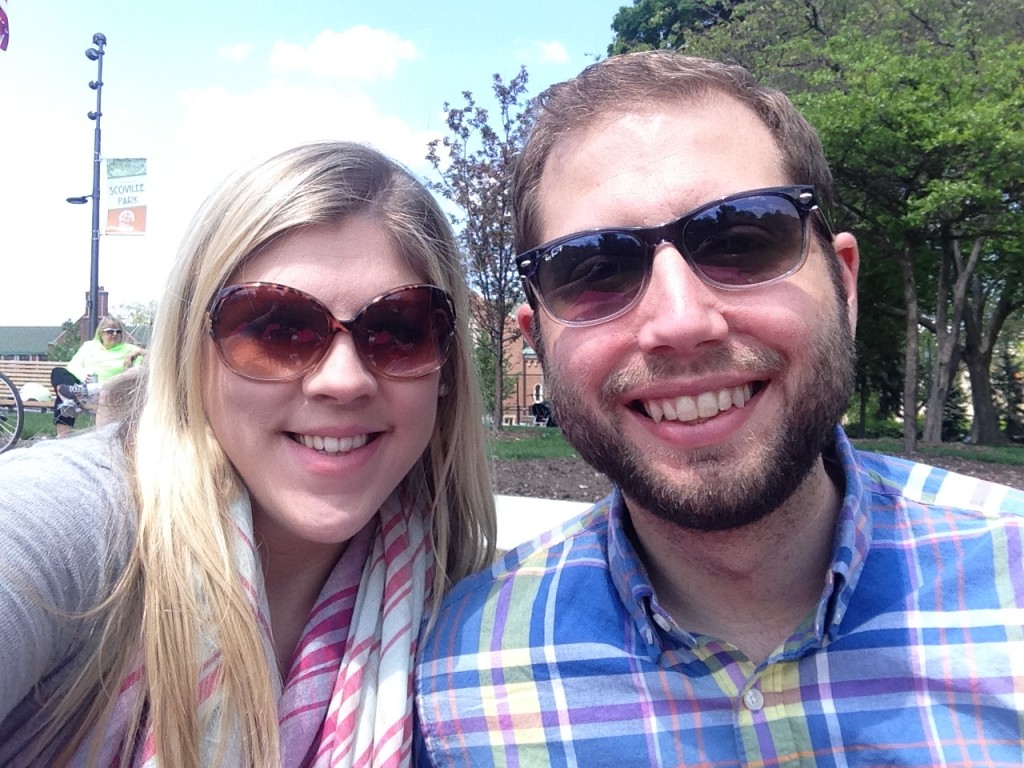 We did not want to waste any part of the day being indoors so decided to change clothes quickly and head to the driving range.  Kevin started teaching me how to play golf last summer.  I’ve only played on a real course a couple of times and I’m definitely not great, but I do ok.  The range was pretty ugly for me yesterday.  I may or may not have taken a huge chunk of grass/dirt out of the ground and managed to not even touch the ball on one of my swings…oops!  Kevin did great (or at least I think so) for the first time hitting this season!  I hope we get to play a lot this summer! 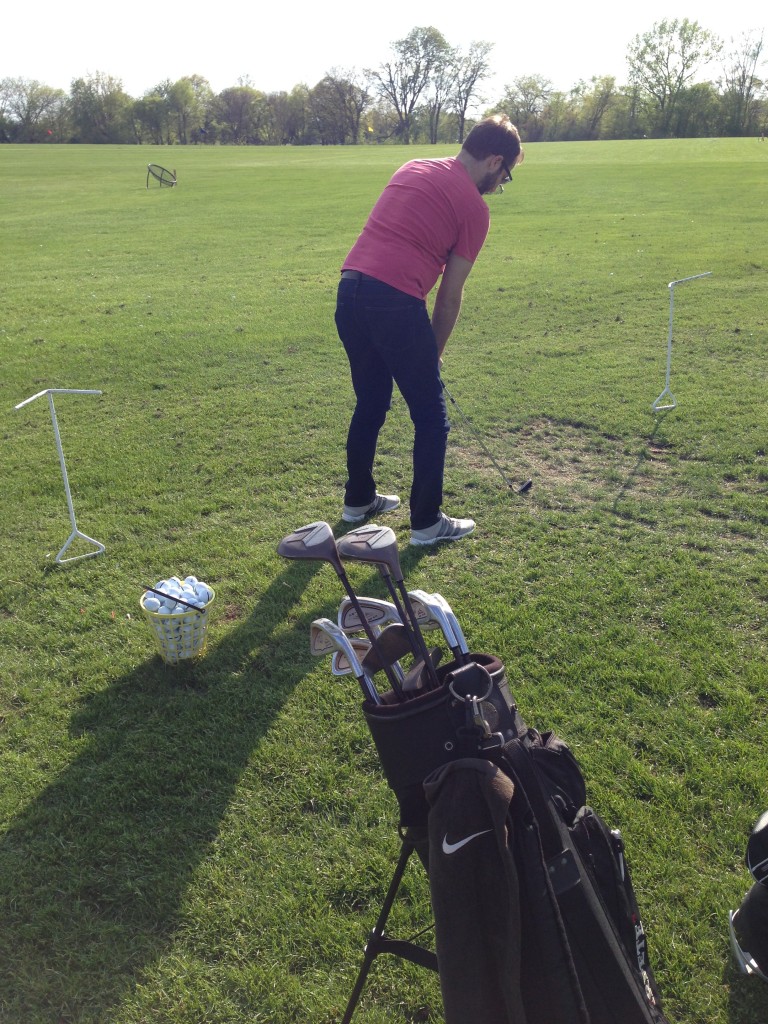 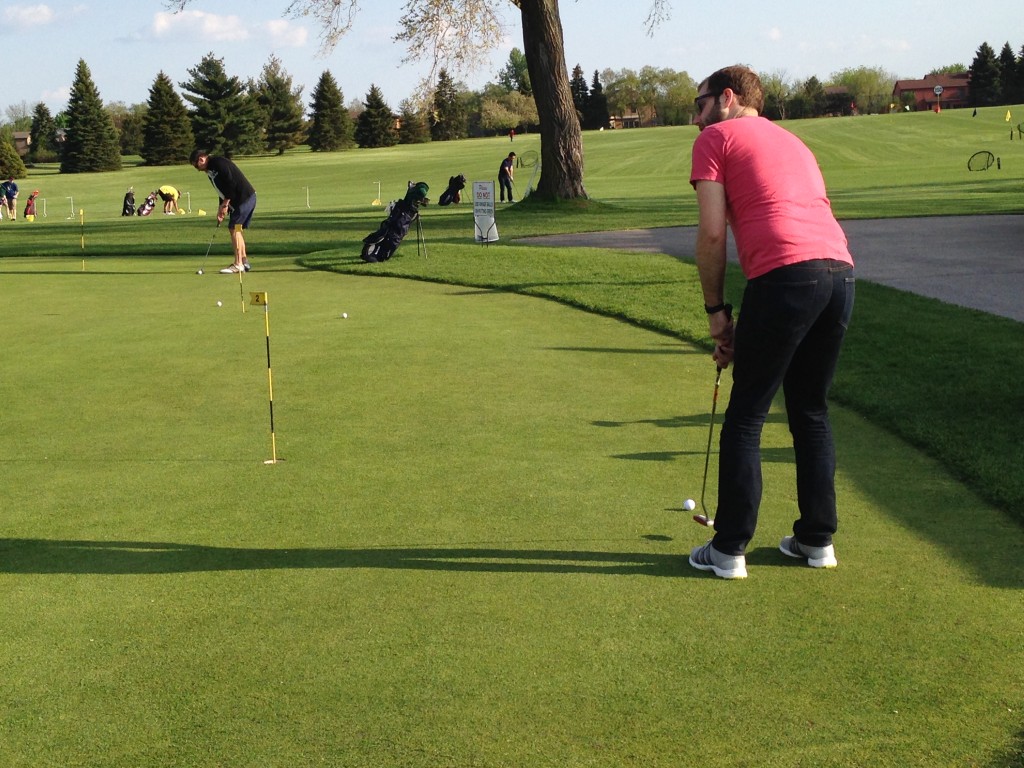 The driving range we went to is near Kevin’s parents’ house so we popped in to say hi and then picked up Portillo’s for dinner on the way home.  It was a very busy weekend and we didn’t get home until around 9:30 last night (thus the reason for the very late blog post today).

Every part of this weekend was filled with fun and family which I loved!  I am so excited for Faith to be joining our family!  She is one of the most genuine and sweet girls you will ever meet.  My brother picked a great girl to be his bride!  I sure hope she felt loved and special this weekend!  One month until their wedding!