On November 25, 2009, exactly 6 years ago today, Kevin and I got engaged!  It was the day before Thanksgiving and I was flying down to Louisville the next morning to spend the holiday with my family.  The week before Kevin asked me if I wanted to go out to dinner before I left to celebrate Thanksgiving together.  He picked me up from work that evening and surprised me with dinner at Smith & Wollensky (I had been wanting to eat there because that’s where Jennifer Anniston went in The Breakup).  After dinner Kevin asked me if I wanted to walk around downtown and look at the Christmas lights.  I told him no because it was cold and snowing/raining outside.  He promised to take me to Starbucks so I said ok. 🙂  We ended up walking down on the river walk by the Wrigley Building which is my favorite part of the city.  He had just bought the new iPhone and said he wanted to test out the camera, but really was pulling out the ring from his coat pocket.  He proposed down on the river walk which was perfect because no one else was around.  My one stipulation of an engagement was to make sure it was private because I did not want a million people watching.  After he proposed we took a horse drawn carriage ride around the city.  It was the perfect night! 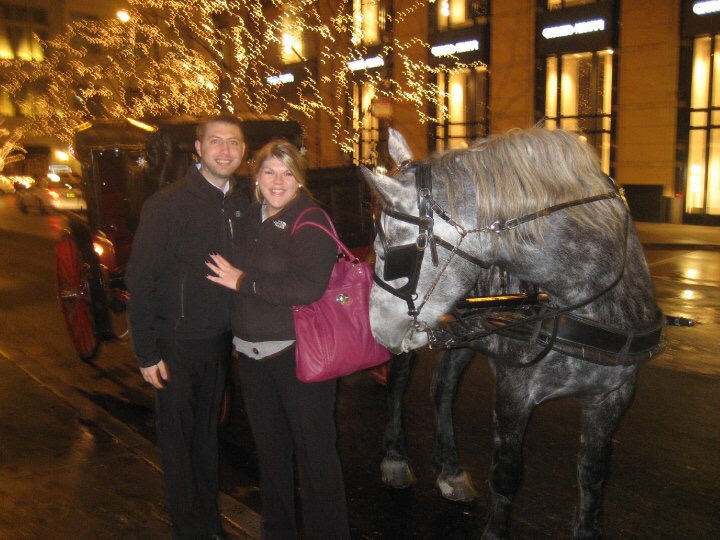 2015: This year we will be in West Lafayette for Thanksgiving so we may go to McGraw’s.

Other favorite steakhouses we have eaten at for anniversaries and birthdays: Bavette’s, RPM Steak, and Benny’s Chop House.  On our list for future dates: Gibson’s and Mastro’s.

What are some of your favorite Chicago steakhouses?  Do you have any Thanksgiving traditions?